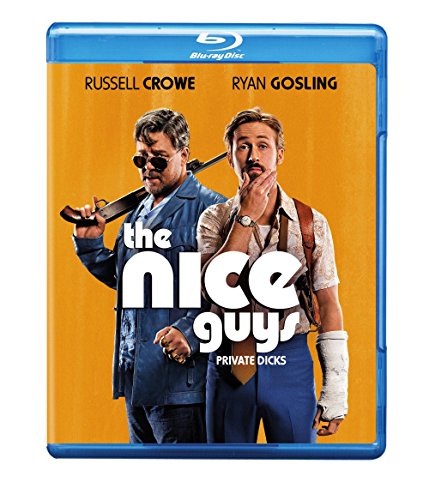 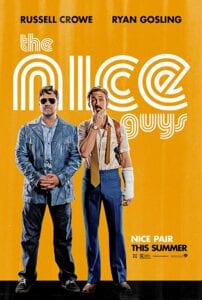 The Nice Guys begins in 1977 Los Angeles. We see a little boy named Bobby sneak one of those top-shelf magazines from his father’s room. As he takes a gander at Misty Mountains’ centerfold glory, her car crashes through his house where she dies from her injuries.

We next meet the private dick, Holland March. Misty’s aunt hired him after she spotted her niece alive and well. While March doesn’t think Misty is still alive, he takes the job because he needs the money.

His investigation leads him to a young girl named Amelia Kuttner. She’s a nervous one, and March’s appearance frightens her to the point she hires muscle man Jackson Healy to scare March off. Healy tracks March down at his house, and breaks his arm before politely leaving.

When Healy returns to his apartment, two thugs accost him; wanting to know Amelia’s whereabouts. One of them is dumb enough to set off a dye pack while searching his place, and gets a face full of the blue stuff for his troubles. The Older Guy knows better, and Blueface annoys him as much as he does Healy. However, Healy manages to turn off the electricity to his place, pull a shotgun on the boys, and ward them off. Now pissed off, Healy sets out to find March so the two can find Amelia first.

The Guys track down Amelia’s anti-pollution protest group to see if she’s there, but she’s not. However, one of them named Chet says he can take them to her. He leads them to the newly burnt-down home of Amelia’s boyfriend named Dean who died in the fire. Amelia and Dean were working with Misty on an “experimental film”  that combines pornography and investigative journalism they titled “How Do You Like My Car, Big Boy?” Oddly enough, those were the last words Misty spoke before she died.

While this looks like a dead end, the Guys learn of the film’s financier Sid Shattuck. Later that night, they infiltrate a party he’s throwing to question him. While Healy looks around, he discovers that the film is missing. March gets blackout drunk, and falls over the hill-top home’s balcony before crashing into a tree. On the other side of it, Shattuck sits dead. As he discovers the body, he crosses paths with Amelia, but he doesn’t know that it’s her.

Meanwhile, March’s daughter, Holly, has managed to sneak into the party, and she stops Blueface from killing Amelia. Blueface pursues them, but a car hits him before driving off as Amelia flees.

Back at the house, Healy takes out Older Guy after a fight, and only stops after Older Guy says he’s going to go back to Michigan. Healy catches up to Holly where and finds Blueface dying in the street. Blueface uses his last words to tell him that his boss has called a hit man named John Boy to kill Amelia, March, and all the other witnesses. Healy shoos Holly away before discreetly strangling him to death.

Soon, Amelia’s mother, Judith shows up to talk to March and Healy. She’s a high-ranking official in the United States Department of Justice, and believes Amelia is delusional that Judith wants her dead. Concerned for Amelia’s well-being, Judith hires the Guys to find her daughter too.

Next, March and Healy make their way to an airport hotel where they believe Amelia is meeting with distributors for the film. Unfortunately for them, John Boy arrives first, and he’s busy slaughtering those distributors. The Guys wisely retreat. As Healy and March debate rushing back to save Amelia, she lands on their car, and takes a shot at them before getting knocked unconscious herself. They then take her to March’s house.

Eventually, Amelia wakes to reveal that that her mother is part of a secret faction of Detroit automakers. After she uncovered evidence that these people are actively suppressing the use of the catalytic converter; allowing for the car to regulate its exhaust emissions, Amelia created the film to expose their collusion. Meanwhile, her mother used her resources to kill anyone connected to the film.

Back at her office, Judith has her assistant, Tally, whom March has the hots for, arrange for the Guys to deliver a briefcase of $100,000 after March tells her they found Amelia. On the drive to deliver the money, March falls asleep while driving it, and crashes. The briefcase flies open to reveal shredded paper neatly cut in the shape of $100 bills.

With the delivery as a diversion to leave Amelia unprotected, John Boy arrives at March’s house. He attacks her and Holly, but the Guys, realizing Judith duped them, return, and get in a gunfight with John Boy. Amelia flees during the carnage—only to flag down John Boy’s car as he flees the scene himself too. He immediately shoots and kills Amelia before driving away in the night breeze.

The Guys next head back to Misty’s house with her aunt. They quickly discover that Mrs. Glenn, who is nearsighted, did see her niece after her death. However, it was projected footage from the missing film, and not the living girl herself.

This leads them back to Chet who is currently a projectionist at the Los Angeles Auto Show, and he’s going to try a gorilla screening of the film to the show’s attendees. Unfortunately for the Guys, when they arrive, Tally holds them at gunpoint. Holly throws coffee at Tally as a distraction, but it’s cold, and doesn’t scold her. When she turns to kill the girl, she slips on the mess, and knocks herself out when she falls.

Healy tracks Chet down to learn that the film was spliced into one of the auto show presentations. The film eventually plays for the entire auto show to see; thus implicating the auto executives also in attendance.

Meanwhile, March is up on the roof fighting the Older Guy. As the two fall from its heights, the Older Guy falls to his death while March lands safely in the pool. Holly manages to stop Tally from reaching the film while Healy gets the better of John Boy on a separate roof top. Holly guilt trips Healy into not killing him so Healy spares his life. The police arrest him instead. March, who’s now convinced he can’t die after falling off the building snatches the dirty film up for a happy ending.

The film closes with Healy and March deciding to work together as private eyes, and name their new agency The Nice Guys.