A traveling preacher named Harry Powell has nefarious motives for marrying a fragile widow. Her young children, whom he terrifies, discover his plot, and they try to save the family. 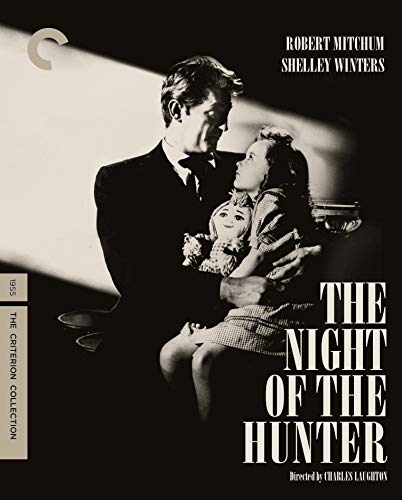 The Night of the Hunter [Blu-ray]

‘The Night of the Hunter’ Movie Summary 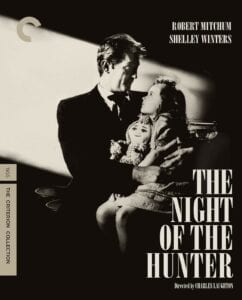 The Night of the Hunter takes place in West Virginia during the depression. The self-appointed preacher, Harry Powell, roams the countryside along the Ohio River looking for single women so that he can marry them, steal their money, and kill them.

While the Reverend states that he is carrying out God’s will, it appears that he is the only one who profits from the killings. After his most recent murder, the police arrest him in a small town when they find him in a stolen car. The state quickly tries the Reverend for murder, and then sentences him to the Moundsville Penitentiary. There he shares a cell with another man recently sentenced for murder named Ben Harper.

The day Harper helped rob a bank, two men were killed during it. Harper then fled the scene, and returned home in time to hide his $10,000 booty from the police. He then swore his two children, John and Pearl, to secrecy before the police took him into custody.

Now in prison, Harper talks in his sleep about the money, and the Reverend takes a keen interest in it. He tries to convince Harper to tell him where the money is, but Harper refuses; taking his secret to the grave once the state executes him. Eventually, the Reverend finishes his sentence, and the warden releases him from prison. Powell immediately makes a bee line to Harper’s wife, children, and their hidden treasure.

Once there, Powell charms everyone in town with his forked tongue, except for John Harper who apparently senses the Reverend’s true evil nature. Eventually, the Reverend convinces John’s mother, Willa, to marry him. Now he has complete access to John and Pearl.

The Reverend uses that access to find out where Harper hid the money as he believes the kids know. However, they consistently frustrate his efforts…that is until John lets it slip that he knows the location of the money; causing the Reverend to double down on his efforts to find it.

After one such inquisition, Willa overhears the Reverend asking Pearl about the money and becoming cross with the young child. When Willa asks Harry about why he is asking about the money, the Reverend becomes angry. He kills Willa in a rage, ties her body to the car, and sends it into the river.

The Reverend then tells everyone in town that Willa ran out on him, and that he’s now going to take care of John and Pearl. John knows they are in trouble, and he tries to hide with his sister from the Reverend. Unfortunately, Harry still finds them.

When he threatens to kill John, Pearl reveals that the money is in the doll. Ecstatic that he has finally learned the secret, the Reverend mistakenly lets the kids to escape his clutches. The two run off with Pearl’s doll to their father’s row boat, and make their getaway on the river. The Reverend chases after them, but can’t catch them before they get out into the water.

The two float down the river, making various stops for food and supplies, but the Reverend is never far behind. Eventually, they hit upon Rachel Cooper’s property. She’s an old woman who constantly takes in children who are down on their luck. She feeds the two, and gives them clean clothes all-the-while trying to get John to trust her. However, John never does, and spend his time keeping an eye out for the good ol’ Reverend.

Eventually, the Reverend tracks them down at Rachel’s farm. When he tries to convince Rachel that he’s their father, she doesn’t believe him. Eventually, John tells her that the Reverend is not his father, and Rachel pulls a shotgun on the man to shoo him away. The Reverend makes a passing threat to them all before retreating to a distance just outside of the shotgun’s range. There, he waits for nightfall.

Of course, nobody can sleep that night while they wait for the Reverend to make his move. Eventually, when he does come near, Rachel shoots him. Wounded, the Reverend runs off to the barn to hide.

Finally, Rachel calls the police, and when they arrive, they take the Reverend into custody. They inform him that he’s wanted for the murder of Willa whose body has just been discovered. As police wrestle to handcuff the Reverend, John has a flashback of his father’s arrest. He swings Pearl’s doll at him, and when the blow lands, the doll bursts open and spills out the hidden money.

The film ends after the Reverend’s found guilty of murdering Wilma. Rachel gets the kids out of the courthouse as a lynch mob forms for the Reverend’s head. A parting shot reveals John and Pearl’s first Christmas with Rachel as one new family. John now fully accepts Rachel symbolizing his trust in her, and his overwhelming feeling that he is safe at last.