Cabiria is a wide-eyed streetwalker who lives in a poor section of 1957 Rome. While she’s managed to buy herself a little house and has some money in the bank, she still dreams of a miracle to save her from her current plight. After her unscrupulous boyfriend steals 40,000 lire from her, and then tries to drown her, she meets a movie star on the Via Veneto. He sweeps her off her feet for the night, and takes her home for a quick fling. Then, at a local shrine where Cabiria seeks the Madonna’s intercession, she meets an accountant who’s smitten with her. He spotted her when a vaudeville hypnotist made her act out her heart’s longings, and he begins courting her. Finally this young prostitute has a man who appreciates her for who she is. 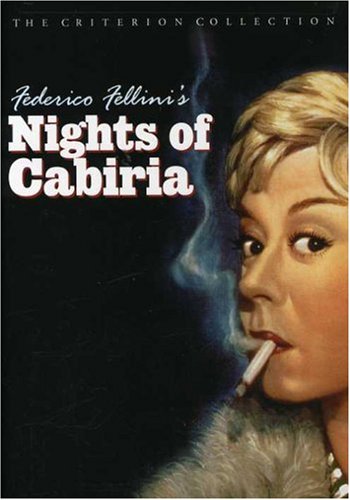 Nights of Cabiria (The Criterion Collection) 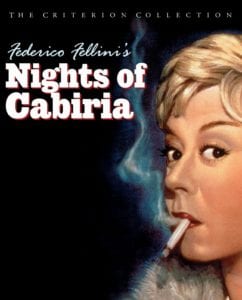 In the United States, The Nights of Cabiria is full of the stuff country western songs are made of. In Italy, it’s the stuff of Neorealism drama.

The tough, but vulnerable Cabiria is robbed, and thrown into a river by her boyfriend, Giorgio, whom she adores. Cabiria can’t swim, and nearly drowns, but some boys save her at the last minute.

She storms off from her saviors; looking for Giorgio, but he is nowhere to be found. Her neighbor and best friend, Wanda, tries to console Cabiria, but she doesn’t want to hear it. Instead, Cabiria returns to work as a prostitute.

One night at the “office,” Cabiria meets the movie star, Alberto Lazzari after he fights with his girlfriend. He takes Cabiria around town before ending up at his mansion. The poor girl is in awe of his luxury, even though she is very proud of her own, simple home. Alberto’s girlfriend returns home, and confronts him. The two make sweet, sweet love while Cabiria hides overnight in his bathroom.

Some days later, Cabiria hangs out in a park with her coworkers as a Church procession passes by. Cabiria entertains the thought of joining them, but a john comes along, and picks her up instead.

Apparently, Pound Town is in the middle of nowhere, because after the john does his deed, Cabiria finds herself on the outskirts of town. There are many caves in the area where the poor live, including an old prostitute whom Cabiria knows. Once again, Cabiria takes comfort that she at least has a home to sleep in.

Cabiria ends up at a magic show a few days later where the magician drags her up on stage. While under hypnosis, she reveals her venerability, and her desire to be happy and married.
One of the men in the audience, Oscar, is moved by her revelation, and he seeks Cabiria out.

Oscar too is lonely, and he believes fate has brought them together. While Cabiria is suspicious of his intentions, she eventually falls in love with him. After a few weeks of romance, Oscar asks her to marry him, which she accepts. Cabiria sells everything she owns for money to start her new life with Oscar, including the home which gives her so much pride.

The day they run off to be married, Cabiria offers Oscar her dowry of 700,000 lira cash. He doesn’t take it, and asks her hold on to it while at lunch. The two then head off for a walk in the forrest, but as they progress, Oscar becomes more distant and nervous. When they get to a tall cliff with the ocean below, Cabiria realizes that this lover too intends to rob her, and throw her into the water.

She gives Oscar her purse, and falls to the ground in hysterics. Oscar grabs the money, and runs away. After crying for some time, Cabiria does the only thing she knows, she picks herself up, and walks back to a life of turning tricks. On her way back into town, she is surrounded by a parade of young gypsies. Their joy and innocence of youth is a stark contrast to Cabiria’s pain. They dance and sing around her until Cabiria smiles through her tears.