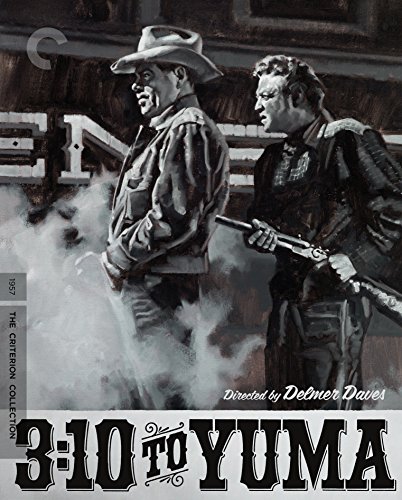 The Criterion Collection has announced that they are bringing the original 3:10 to Yuma to Blu-ray. The film is directed by Delmer Daves and stars Glenn Ford, Van Heflin, Felicia Farr, Leora Dana, and Henry Jones. 3:10 to Yuma will be available online and in stores on May 14, 2013.

In this beautifully shot and acted, psychologically complex western, Heflin is a mild-mannered cattle rancher who takes on the task of shepherding a captured outlaw, played with cucumber-cool charisma by Ford, to the train that will take him to prison. This apparently simple plan turns into a nerve-racking cat-and-mouse game that will test each man’s particular brand of honor. Based on a story by Elmore Leonard, 3:10 to Yuma is a thrilling, humane action movie, directed by the supremely talented studio filmmaker Daves with intense feeling and precision.

The Criterion Blu-ray will include several special features, including: a new high-definition restoration of the film, with uncompressed monaural soundtrack; an alternate 5.1 surround soundtrack, presented in DTS-HD Master Audio; new interviews with author Elmore Leonard and Glenn Ford’s son and biographer, Peter Ford; and a booklet featuring an essay by critic Kent Jones.

Disclaimer: Affiliate links are contained in this post. This means when you click a link, and purchase an item, Movie House Memories will receive an affiliate commission. Advertisers and Affiliate Partnerships do not influence our content. See our Terms of Use about the inclusion of affiliate links on this site for more information.
February 20, 2013
1 minute read
Show More
Back to top button
Close
Close