In The Outlaw Josey Wales, Josey Wales is looking to avenge his family’s brutal murder while on the lam from the law and under pursuit from a gang of killers. While he prefers to travel alone, and Indian and a woman join his campaign. 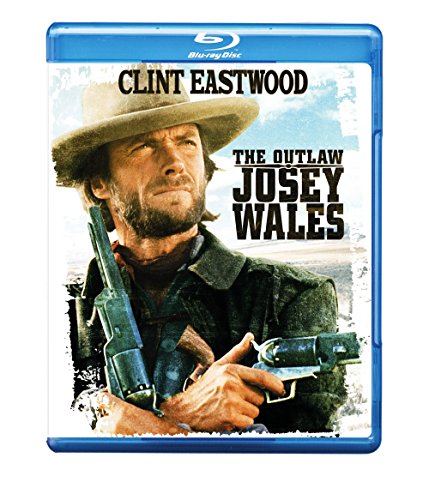 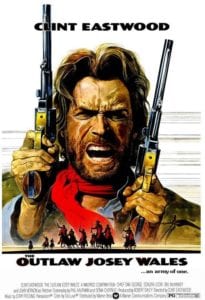 The Outlaw Josey Wales is the story of an innocent Missouri farmer forced onto a path of revenge and murder during and after the American Civil War. Josey Wales works on his plot of land with his young son and wife far removed from the War Between The States, until a group of renegade North soldiers called the Kansas Redlegs under Captain Terrill suddenly appear to burn, rape and kill Josey’s wife and son and leave Josey for dead.

When Josey recovers, he buries his family and picks up an old revolver out of the charred building. He teaches himself to shoot with his right hand, then his left hand, then both hands, growing faster, deadlier and more accurate with each shot, becoming a bonafide gunfighter.

When a Confederate patrol happens by led by Bloody Bill Anderson, Josey joins them on several bloody raids on Union encampments for the next few years. Once the war is over and Anderson died from his wounds in the war, Josey’s patrol is instructed to surrender by new commander, Colonel Fletcher.

Under Fletcher, the entire patrol rides into Union headquarters except Josey stays behind. From distance, Josey realizes it’s a trap and Fletcher has sold them out to the Redlegs. The entire patrol is mowed down by Terrill’s men with gatling guns before Josey arrives and turns the guns onto the Union soldiers before escaping with one last wounded Confederate soldier.

With the entire Union army, Terrill and Fletcher hot on their trail, and a $5,000 bounty on his head, the outlaw Josey Wales and the young soldier disappear into the backwoods; dodging soldier patrols and bounty hunters at every turn.

The young soldier finally dies from his wounds, so Josey finds an old cabin that is occupied by an even older Indian, Chief Lone Walie. Chief and Josey make wary friends, and take off together toward Mexico. Along the way, Josey stops at a trading post as two criminals are raping an Indian squaw named Moonlight.

Josey kills the two low-lifes and Moonlight joins Josey and the Chief as they head into Texas and the Indian Territory. As they stop for supplies and watch a family of snobs from Kansas tell anyone who will listen how anything that isn’t from Kansas isn’t worth horse spit, four Union soldiers recognize Josey and pull their guns on him.

Before their dead carcasses can hit the ground, Josey and Chief are chased out of town again, and disappear into the desert. As they backtrack to escape, they come across that same Kansas family who has been attacked by Comancheros and are nearly killed an/or raped before Josey shows up and kills every one of the low-lifes.

Heading to the homestead that was well-fortified to withstand Indian attacks, the band starts a new life of peace, until the Comanches under Chief Ten Bears takes two of Josey’s men hostage.

Josey’s group prepares to repel the inevitable attack, but Josey rides into the Comanche camp, and through honest talk and iron words creates an unbreakable bond of friendship with the Comanche chief. Josey returns to the homestead with his men as the Redlegs and Captain Terrill arrive to kill Josey.

A huge battle sequence occurs with Josey’s adopted family coming to his aid; killing all the soldiers, but after being shot, Terrill disappears on his horse with Josey giving close chase.

Josey, wounded himself, corners Terrill in Santa Rio, but he is out of ammo, and fires empty pistols over and over. Terrill pulls his sword, but Josey uses it to impale Terrill. Josey steps into the saloon, only to realize two Texas Rangers are there looking for him, along with Fletcher.

The townspeople call Josey “Mr. Wilson” and claim Josey is dead in Mexico. The Rangers ride away as Josey exits to the street followed slowly by Fletcher. As Josey waits for the final duel, Fletcher, having grown weary of the war, calls Josey “Mr. Wilson” and tells him the war is over Fletcher heads to Mexico to “search” for Josey. Josey climbs on his horse, and rides off toward the homestead into the sunset.