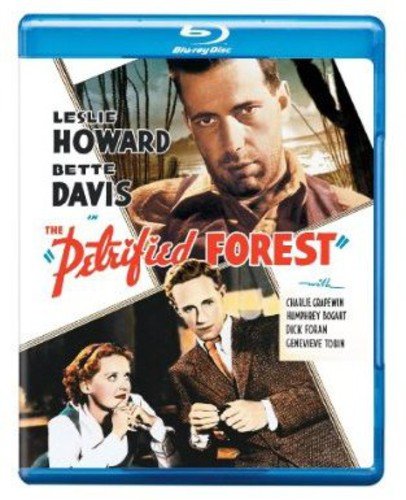 Warner Bros. Home Entertainment has announced that they are bringing The Petrified Forest to Blu-ray this May. The film was directed by Archie Mayo and stars Leslie Howard, Bette Davis, Genevieve Tobin, Dick Foran, and Humphrey Bogart. The Petrified Forest will be available individually and as part of The Ultimate Gangster Collection Classic set, which will include White Heat, Little Caesar, The Petrified Forest, The Public Enemy, and a fifth disc that includes a feature-length documentary “Public Enemies: The Golden Age of the Gangster Film”. The film will be available online and in stores on May 21st.

The Petrified Forest tells the tale of a rundown diner bakes in the Arizona heat. Inside, fugitive killer Duke Mantee sweats out a manhunt, holding disillusioned writer Alan Squier, young Gabby Maple and a handful of others hostage. As trapped as his captives, Mantee admits: “It looks like I’ll spend the rest of my life dead.” The Petrified Forest, Robert E. Sherwood‘s 1935 Broadway success about survival of the fittest in the modern world, hit the screen a year later with Howard (Squier) and Bogart (Mantee) magnificently recreating their stage roles and Davis (Gabby) ably re-teaming with her Of Human Bondage co-star Howard. Sherwood initially wanted Bogart for a smaller role. “I thought Sherwood was right,” Bogart said. “I couldn’t picture myself playing a gangster. So what happened? I made a hit as the gangster.” So right was he that Howard refused to make the film without him…and helped launch Bogey’s brilliant movie career.

Disclaimer: Affiliate links are contained in this post. This means when you click a link, and purchase an item, Movie House Memories will receive an affiliate commission. Advertisers and Affiliate Partnerships do not influence our content. See our Terms of Use about the inclusion of affiliate links on this site for more information.
March 23, 2013
2 minutes read
Show More
Back to top button
Close
Close