In this parody of Gilbert and Sullivan’s Pirates of Penzance, Mabel is a modern-day misfit who finds herself attracted to a handsome American. When she has an accident at sea, she has a vivid dream that she is the youngest daughter to Major-Stanley Stanley in the age of pirates. Mabel falls passionately in love with Frederic, an ex-Pirate of Penzance. When Frederic’s former shipmates arrive on Mabel’s island, Mabel and Frederic must find a way not only to fight off the pirates, but to overcome a marriage custom that prevents Mabel from marrying the man of her dreams. 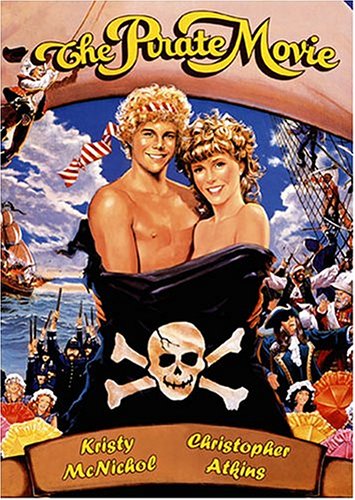 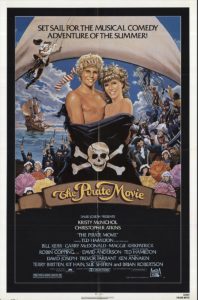 The film begins in a seaside community in 1980’s Australia. Mabel Stanley (Kristy McNichol) is an awkward teenage girl who walks the boardwalk with her boombox. She attends a local pirate festival with a group of extrovert girls in bathing suits. They all watch a swordplay demonstration that is led by a handsome American (Christopher Atkins). The American takes an interest in Mabel and invites her to take a ride on his boat with him. Unfortunately, he also invites Mabel’s companions, the extrovert girls. Once at the dock, the other girls hijack the boat with the handsome American and leave Mabel stranded on the dock by herself. Mabel rents her own boat and tries to catch up with her “friends”. Unfortunately, a sudden storm throws her overboard and she washes up on a beach unconscious. While on the beach she begins to dream of a different life.

In the dream, Mabel is the youngest daughter of Major-General Stanley (Bill Kerr). She dreams of adventure and love, but she cannot get married until all her sisters are married due to her father’s marriage custom. Not far off in the ocean, a pirate ship led by the Pirate King (Ted Hamilton) is celebrating the 21st birthday of Frederic (Christopher Atkins), the young apprentice of the Pirate King who resembles the handsome American. Frederic refuses an invitation from the Pirate King to become a full pirate. Frederic states that his parents were killed by pirates, and Frederic swears to avenge their deaths. The Pirate King forces Frederic off the ship onto a small dingy and leaves him adrift at sea .

While at sea, Frederic spies Mabel and her older sisters on a nearby island and swims to shore to greet them. Mabel’s sisters run in fear, but Mabel is unafraid of Frederic. Frederic and Mabel quickly fall in love with each other. Frederic just as quickly proposes marriage, but Mabel informs him that the local custom requires that all her elder sisters will need to marry first. Nevertheless, they plan to ask Mabel’s father for permission to marry.

Soon, the Pirate King arrives with his crew. They look to pillage and rape the inhabitants of the island. The Major-General arrives and convinces the Pirate King to free his daughters and leave in peace. However, the Pirate King anchors his ship just outside the harbor instead of leaving. Mabel talks to her father about marrying Frederic, and she convinces her father that Frederic will help to recover the family fortune that was stolen by the pirates years before. Unfortunately, Frederic informs Mabel that the treasure was lost at sea, and the location where it was lost was tattooed as a map on the Pirate King’s back.

Mabel and Frederic sneak onto the pirate ship so that they can copy the map. Mabel feigns sexual interest in the Pirate King while Frederic secretly draws the map on paper. Mabel sneaks out of the Pirate King’s cabin in the dark, and the pirate leader has sex with Ruth (Maggie Kirkpatrick), the pirate ship’s nurse, believing that it is Maple. Frederic and Mabel jump overboard and swim back to shore. Before leaving, Frederic sabotages the ship causing it to sink.

The next day, Mabel and Frederic recover the stolen treasure and present it to her father. Although appreciative of the treasure’s return, the Major-General believes that the treasure will simply be stolen again by the pirates once they realize that it has been recovered. Mabel sends Frederic to raise an army for their protection. However, Frederic encounters the Pirate King, and the two men engage in a fight. The fight is stopped by Ruth who reminds the Pirate King of Frederic’s apprenticeship contract. Since Frederic’s birthday is on February 29th, the extra day in a leap year, Frederic is only five years old, not twenty-one. Therefore, Frederic is still bound by his contract to remain a member of the pirate crew.

Frederic reluctantly informs Mabel of his commitment and his intent to honor his contractual obligation. Mabel is devastated, realizing that she not only needs to find an army to fight the pirates by herself, but that she is losing the love of her life. Mabel sets out to organize the local constables as her army. The constables are reluctant to follow a woman, but she soon shames the cowardly constables into assisting her family.

That night, the pirates raid the Stanley property and overwhelm Mabel, the constables, and the rest of the Stanley family. Frederic switches sides in the middle of the fight and stands with Mabel. The Pirate King orders their execution. In response, Mabel demands a happy ending, acknowledging that the entire sequence is a dream. Everyone, including the pirates, cheers their approval. Mabel pairs all her sisters up with pirates so that she can honor the marriage custom and marry Frederic. The Pirate King agrees to marry Ruth as well. The fantasy sequence ends with a song and dance number involving Mabel, Frederic, all the pirates, the Mabel family, and the constables.

Next, Mabel awakens back on the beach in modern times. She discovers that she is wearing the wedding ring that Frederic had given her in her dream. The handsome American arrives and lifts her to her feet. He passionately kisses Mabel, who believes that she might still be dreaming. She asks if his name is Frederic, to which he replies no. He then carries her off to marry her. The film ends after the marriage ceremony which occurs on a pirate ship docked in an Australian harbor. The attendees are made up of the people in her dream in their modern-day positions.