Oscar winners Steven Spielberg, Meryl Streep, and Tom Hanks team up for the first time in this thrilling film based on a true story. Determined to uphold the nation’s civil liberties, Katharine Graham, publisher of The Washington Post, and hard-nosed editor Ben Bradlee join forces to expose a decades-long cover-up by the Federal government. But the two must risk their careers –– and their freedom –– to bring truth to light in this powerful film with a celebrated cast. 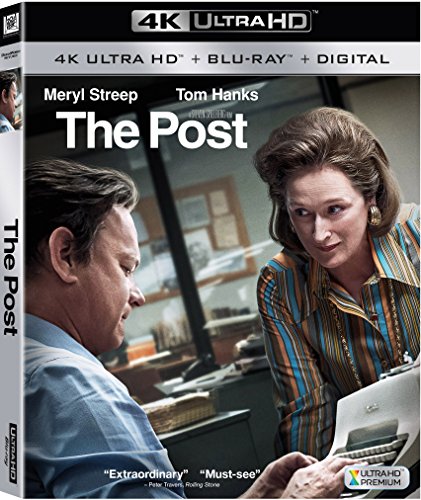 In The Post, State Department military analyst Daniel Ellsberg (Matthew Rhys) is imbedded with troops fighting in Vietnam in 1966. His assignment is to document the United States military progress in the region for the Secretary of Defense, Robert McNamara (Bruce Greenwood). On the flight home, McNamara privately tells Ellsberg and William Macomber (Cotter Smith) that he believes the war is unwinnable. However, McNamara tells the media that he has every confidence in the war effort while deplaning.

Ellsberg becomes disillusioned with McNamara and the war effort. Several years later, Ellsberg is working for the RAND Corporation as a civilian military contractor. Ellsberg surreptitiously photocopies thousands of pages from classified reports concerning the United States involvement in Vietnam, dating back to the Truman administration. Ellsberg leaks a copy of the documents to The New York Times.

In 1971, newspaper heiress Katharine Graham (Meryl Streep) tries to balance her busy social life with her responsibilities as owner and publisher of The Washington Post. Katharine took over the paper after both her husband, Phil Graham, and her father, Eugene Meyer, passed away. Katharine is also trying to prepare for the newspaper’s initial public offering of stock which is designed to financially stabilize the paper. Katharine is generally uncertain when it comes to her decision making. She is frequently overruled or bullied by her male advisers. The Post’s editor-in-chief Ben Bradlee (Tom Hanks) and board member Arthur Parsons (Bradley Whitford) each pull Katharine in different directions with their domineering style.

McNamara pulls Katharine aside at a dinner party and informs her, as his long-time friend, that The New York Times is publishing a negative story about him the next day. The story is one of the first from the Pentagon Papers. It describes the government’s long running deception regarding the Vietnam War. Specifically, it names McNamara as a person who doesn’t believe the war is winnable. The Times plans on running a continuing series about the top-secret documents, but a court injunction halts any further publication by the paper.

The Post follows up on The Times’ first story. The assistant editor Ben Bagdikian (Bob Odenkirk) suspects his former colleague Ellsberg is the source for the story. Bagdikian tracks down Ellsberg who is living in a motel room. Ellsberg provides Bagdikian with several thousand pages of the copied documents after the newspaperman promises that they will publish. Bradlee pulls a team of reporters together at his home to work on the stories without drawing too much attention at the office. Bradlee contacts the lawyers for the paper to get their recommendations on publishing. The attorneys strongly advise against publishing the material, fearful that criminal charges could be filed against everyone involved.

Bradlee also notifies Katharine of their intent to publish. She confers with McNamara, Bradlee, and her good friend and advisor Fritz Beebe (Tracy Letts) as she agonizes about the decision. She is informed that the legal entanglement that would follow publication could jeopardize the initial public stock offering. Unsurprisingly, Bradlee advocates for publication, arguing that their politician friends lied to them and the American people and should be held accountable. The decision becomes more difficult when the lawyers learn that the Post’s source is the same as the Times’ source. The Times’ restraining order forbids the Times’ agents, Ellsberg, from having the story published at another paper. If the courts find that Katharine and Bradlee violated the court order, they could go to prison. Katharine’s family legacy could be put into jeopardy. Nevertheless, Katharine gives Bradlee permission to run the story.

In the fall out, the Post is included in the Times’ federal court case. The United States Supreme Court immediately takes the case due to the constitutional ramifications. In the meantime, other national newspapers pick up the story in solidarity. On June 30, 1971, the Supreme Court rules in favor of the newspapers by a 6-3 vote.

In the aftermath, President Richard Nixon orders that all Washington Post personnel be barred from the White House and other presidential events. One year later, on June 17, 1972, security guard Frank Wills discovers a break-in at the National Democratic offices at the Watergate Hotel.