Severe, pale-eyed, handsome, Phil Burbank is brutally beguiling. All of Phil’s romance, power and fragility is trapped in the past and in the land: He can castrate a bull calf with two swift slashes of his knife; he swims naked in the river, smearing his body with mud. He is a cowboy as raw as his hides. The year is 1925. The Burbank brothers are wealthy ranchers in Montana. At the Red Mill restaurant on their way to market, the brothers meet Rose, the widowed proprietress, and her impressionable son Peter. Phil behaves so cruelly he drives them both to tears, reveling in their hurt and rousing his fellow cowhands to laughter – all except his brother George, who comforts Rose then returns to marry her. As Phil swings between fury and cunning, his taunting of Rose takes an eerie form – he hovers at the edges of her vision, whistling a tune she can no longer play. His mockery of her son is more overt, amplified by the cheering of Phil’s cowhand disciples. Then Phil appears to take the boy under his wing. Is this latest gesture a softening that leaves Phil exposed, or a plot twisting further into menace? (Courtesy of Netflix)

‘The Power of the Dog’ Movie Summary 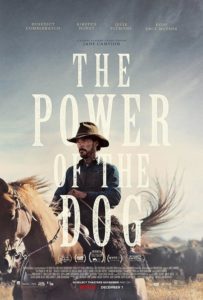 Brothers Phil (Benedict Cumberbatch) and George Burbank (Jesse Plemons) are wealthy ranch owners in 1925 Montana. Phil is a highly intelligent but antisocial individual who is the exact opposite of his kind brother. During a cattle drive, George meets widow and inn owner Rose Gordon (Kirsten Dunst). George is immediately smitten, but Rose is none too fond of Phil as he makes fun of her quiet and slightly effeminate son Peter (Kodi Smith-McPhee).

George and Rose soon marry which displeases Phil. Phil perceives Rose as marrying George for their family money. Rose uses some of George’s money to send Peter to college to study medicine and surgery. Rose moves into the Burbank ranch house with George and Phil. Phil is openly hostile with Rose and takes every opportunity to antagonize her. George plans a dinner party with his parents (Peter Carroll and Frances Conroy) and Governor Edward (Keith Carradine). George wishes to introduce Rose to his family and asks her to play on a new piano that he has purchased for her. Rose struggles to practice the piece of music while Phil instantly plays it on his banjo in an act of intimidation. The night of the dinner party, Rose is overcome with nerves and cannot play the music. Her failure is commented on by Phil. Rose begins drinking at the party, something that she has never done before.

Sometime later, Peter comes to the Burbank ranch to stay for the summer. At that point, Rose is a full-blown alcoholic, a fact that is noticed by Peter. Phil and his cattlemen taunt Peter which causes the young man to hide in his room dissecting animals. One day, Phil enters a secluded clearing where he masturbates with the handkerchief of his mentor, the deceased Bronco Henry. Peter ventures out and comes across the same clearing. He finds a stash of magazines with photos of nude men with Bronco Henry’s name on them. He sees Phil bathing in a pond with the handkerchief around his neck. Phil notices the intruder and yells at Peter to get the hell out of there.

Bronco Henry told me that a man was made by patience in the odds against him. Phil Burbank (Benedict Cumberbatch)

Not long afterwards, Phil suddenly warms to Peter and offers to plait a lasso from rawhide for the young man. He offers to teach Peter how to ride a horse. One day, Peter rides out on his own and finds a dead cow. Presuming that the cow died from anthrax infection, Peter puts on gloves and cuts pieces of the cow’s hide off. Later, Peter helps Phil with a fencing job. The two men corner and kill a rabbit. Phil injures his hand during the endeavor, resulting in an open wound. Afterwards, Peter tells Phil about finding the body of his alcoholic father, who had hanged himself. Peter confesses how he had to cut his father’s dead body down all by himself.

Rose is disturbed about Phil and Peter’s growing relationship which only worsens her alcoholism. A drunk Rose learns that Phil has a policy of burning the cow hides that he does need for himself. Rose decides to give the left-over hides to a group of local Native American traders who thank her with a pair of gloves. A few moments later, Rose collapses in front of the cattlemen. George has her brought inside the house and begins to tend to her.

Phil and Peter return a brief time later. Phil is furious that his cow hides are gone and prepares to berate Rose for her defiance. However, George stops him and informs his brother that Rose is ill. Phil calms down but is frustrated that he no longer has sufficient hides to finish Peter’s lasso. Peter offers him the hides that he cut from the dead cattle, but he neglects to inform Phil that the animal died of disease. Phil is moved by the offer and promises Peter that they will have a much better relationship from that point on and offers to finish the lasso that night. Phil begins soaking the hides in water to soften them. Using his injured hand, Phil begins manipulating the hides in the water, unaware of the disease that it is entering his body.

Phil tells Peter the story of how Bronco Henry saved his life when he was a boy. The two men were caught in a severe snowstorm. Phil tells Peter that he and Bronco Henry lied together body to body in a bedroll to stay warm. Peter asks them if they were naked in the bedroll, and Phil merely smiles and does not answer the question. Phil and Peter share a cigarette together. The next morning, Phil fails to attend breakfast, and George finds him sick in his bed with a severely infected hand. George tries to rush his brother to the doctor, but a delirious Phil desperately looks for Peter to give him the finished lasso. George drags his brother away before he can give Peter the rope.

Sometime later, George is shown buying a coffin for Phil. At the funeral, a doctor informs George that Phil most likely died from anthrax. George is baffled by the diagnosis and states that his brother always avoided diseased cattle. Peter does not attend the funeral. He is shown reading a Book of Common Prayer. He quotes Psalm 22:20 “Deliver my soul from the sword; my darling from the power of the dog.” A short time later, Peter handles the finished lasso with gloved hands before he puts the rope under his bed. He looks out the window and watches George and a sober Rose return home and embrace. Peter turns away and smiles, knowing that his mother’s tormentor can do no more harm.