The Prestige begins at the end of the nineteenth century in London. Robert Angier, his beloved wife, Julia McCullough; and Alfred Borden are friends and assistants of a magician. When Julia accidentally dies during a performance, Robert blames Alfred for her death. From that moment forward, the two are mortal enemies. In time, both become famous magicians themselves. As their rivalry increases, so does their sabotaging performances of the other. However, when Alfred becomes famous for once specific trick, Robert’s obsession kicks into overdrive to one up the man. In the end, their rivalry leads to tragic consequences for both men. 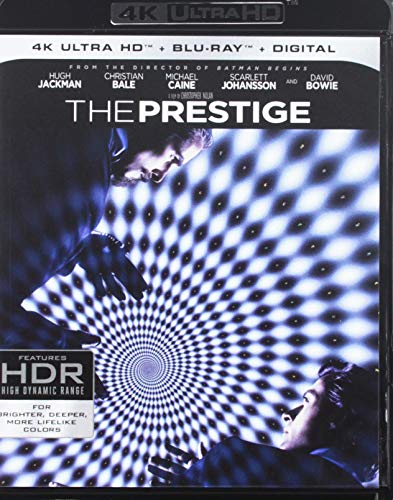 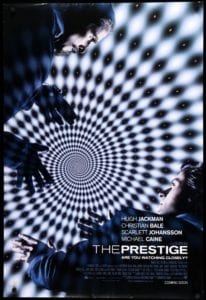 The Prestige begins with an array of identical hats strewn across the ground outdoors, and the voice of Alfred Borden asking if we are watching closely. Next, John Cutter explains the form of an illusion to a little girl. He reveals how each illusion requires three parts: The Pledge, where the audience is presented with an ordinary object; The Turn, where the object is turned into something extraordinary; and The Prestige, where the object is brought back.

From there, we see Alfred Borden tried and convicted for the death of rival magician, Robert Angier who drowned in a tank of water beneath the stage at his performance. From his prison cell, the agent of a mysterious wealthy man named Lord Caldlow approaches Borden. Lord Caldlow wants to buy Borden’s most successful illusion, the transporting man, but Borden won’t sell the trick. As a show of good faith, Caldlow’s man gives Borden Angier’s diary before leaving. As Borden reads Angier’s diary, he recalls the events that led up to Angier’s death.

Once upon a time, Borden and Angier worked together with Cutter as young magicians. Angier’s wife, Julia, also worked alongside them. During one show, Borden tied Julia’s knots a bit too tight before they dropped her into what would ironically be the same tank of water that killed Angier later in life. Julia is unable to slip the knot, and she drowns on stage in front of her husband. Thus begins Angier’s obsession for revenge on Borden as he views Borden as indifferent towards Julia’s death.

Soon after, Borden meets Sara, and he falls in love with her while he starts a solo career with his mysterious ingeniur Fallon. When Angier slips a live bullet into a pistol during Borden’s show, it results in Borden losing two fingers when he tries to catch it for a trick.

Angier continues his work with Cutter and Cutter’s foxy new stagehand, Olivia. Angier’s career takes off until Borden sabotages an illusion of his that injures a member of the audience. The rivalry between the two men heats up.

Eventually, Borden marries Sara, and then gains success with his illusion called The Transporting Man. His illusion is not only awesome, but it’s so mysterious that nobody can guess how he does it.

Extremely jealous, Angier sends Olivia to work for Borden as his spy so he can steal his trick. However, Olivia falls in love with Borden and winds up double crossing Angier. She gives Angier a trick diary from Borden which sends him on a trip to Colorado to meet Nikola Tesla. He wants Tesla to make a machine that will not only allow him to perform the Transporting Man illusion, but also upstage Borden once and for all. Tesla warns Angier not to accept the machine, but Angier persists, and takes it with him. The machine works all too well.

By now, Sara has grown unhappy with her marriage to Borden; finding his seemingly dual personality and affair with Olivia more than she can handle. She hangs herself in Borden’s shop which leaves Borden alone to raise their daughter, Jess.

One night, after Borden sneaks backstage to see if he can learn the secret to Angier’s illusion, he finds Angier falling into the tank of water from the beginning of the film. That’s where he is framed for murdering Angier.

At this point, the diary that Borden is reading in prison says that Angier, the writer of the diary, indeed framed Borden for his murder. In fact, Angier is still alive and well; enjoying his victory over Borden. Having taken custody of Borden’s daughter, Lord Caldlow visits him. We find that Lord Caldlow and Angier are one in the same. This revelation that his greatest enemy is now raising his daughter breaks his heart.

On Fallon’s last visit to see Borden, he tells Fallon to live for both of them. Soon after Borden is dead; swinging from the gallows pole. Fallon eventually finds Angier at his secret warehouse where he learns Angier’s secret method to his Transporting Man illusion. Tesla’s invention didn’t transport Angier. It merely duplicated him.

Each time Angier performed the trick, his duplicate self would appear in another location while the other one drowned to death in the tank of water he fell into below the stage. Ironic as Fallon reveals a trick of his own. He and Borden are twin brothers, and each twin is both Fallon and Borden; switching as necessary to carry on their illusion that there is only one Fallon and one Borden.

Fallon then shoots Angier dead for the murder of a man for whom he has already been convicted. He then reunites with his daughter to complete Christopher Nolan’s illusion called the Prestige.