The Pride of the Yankees is a biopic that tells the life of baseball player Lou Gehrig—who played in 2130 consecutive games before dying of to ALS—a deadly nerve disease which now bears his name—at the age of 37. The film follows Gehrig from his childhood in New York until his famous ‘Luckiest Man’ speech during his farewell in 1939. 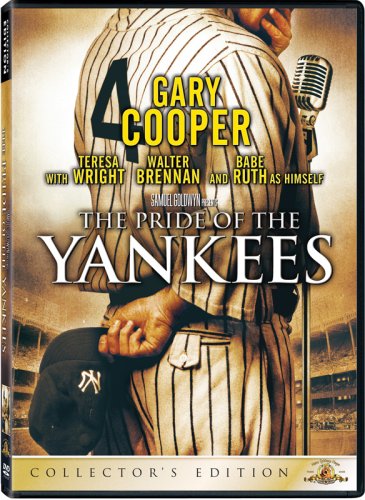 The Pride of the Yankees (Collector's Edition)

‘The Pride of the Yankees’ Movie Summary 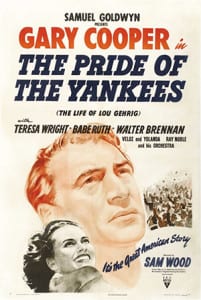 The Pride of the Yankees is a biography of Lou Gehrig, the New York Yankee baseball legend who died way too young from Amyotrophic Lateral Sclerosis, now known as Lou Gehrig’s disease.

The film opens with a young Lou longing to play in a neighborhood game in the middle of New York City. He gets his chance at bat and hits so well, he breaks a window.

The naïve Lou is devoted to his Mom. He goes off to college and tries to refrain from baseball to please her. Eventually baseball wins out and Lou is invited by a Yankee scout to try out and makes the team.

Lou Gehrig was known for his strong character. He was kind to fans, promising and delivering home runs to an ill child in the hospital. His nickname was ‘The Iron Horse’ because of his endurance and strength.

The film also chronicles some of Lou’s personal life, such as his relationship with his family, wife, college friends, and teammates.

Tragically, Lou’s natural gift began to fail him and he started to miss catches and at bat. He was diagnosed with the disease that would end his baseball career and cut his life short.

The climax of the film is Lou’s famous speech in Yankee stadium, where he declares himself “the luckiest man on the face of the earth.”