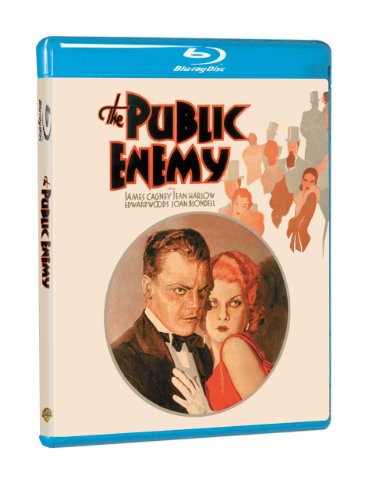 Warner Bros. Home Entertainment has announced that they are bringing The Public Enemy to Blu-ray this May. The film was directed by William A. Wellman and stars James Cagney, Jean Harlow, Edward Woods, and Joan Blondell. The Public Enemy will be available individually and as part of The Ultimate Gangster Collection Classic set, which will include White Heat, Little Caesar, The Petrified Forest, The Public Enemy, and a fifth disc that includes a feature-length documentary “Public Enemies: The Golden Age of the Gangster Film”. The film will be available online and in stores on May 21st.

The Public Enemy showcases James Cagney’s powerful 1931 breakthrough performance as streetwise tough guy Tom Powers — but only because production chief Darryl F. Zanuck made a late casting change. When shooting began, Cagney had a secondary role, but Zanuck soon spotted Cagney’s screen dominance and gave him the star part. From that moment, an indelible genre classic and an enduring star career were both born. Bristling with ’20s style, dialogue and desperation under the masterful directorial eye of William A. Wellman, this is a virtual time capsule of the Prohibition era: taut, gritty, hard-hitting — even at breakfast when grapefruit is served. The film was nominated for an Academy Award for Best Writing – Original Story (John Bright and Kubec Glasmon).

The Blu-ray edition of The Public Enemy features English DTS-HD Master Audio Mono; English SDH, Spanish and French subtitles; and the following extras: Leonard Maltin Hosts Warner Night at the Movies 1931 with Newsreel, Comedy Short The Eyes Have It, Cartoon Smile, Darn Ya, Smile!, and theatrical trailers; feature film commentary by film historian Richard B. Jewell, Beer and Blood: Enemies of the Public featurette; and a 1954 re-release foreword.