The Punisher is based on the enormously popular 80’s Marvel comic book. Dolph Lundgren is Frank Castle, an ex-cop who is believed to have been killed with his wife and kids from a gangland hit by a local mafia boss. Now he lives in the sewers and acts as judge, jury, and executioner to the city’s criminals in retaliation for the unpunished murders of his family. Frank’s ex-partner Jake finally catches up with the vigilante as he tries to stop the Japanese mob, which is trying to take over the city’s deteriorating mafia operations. 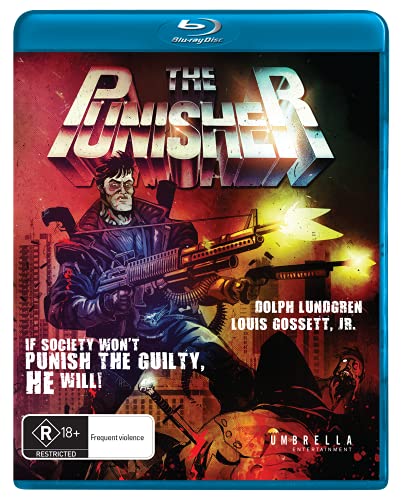 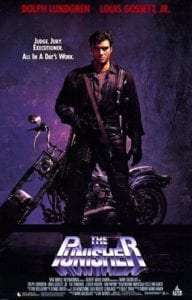 Dino Moretti (Bryan Marshall) is released from prison after his conviction is reversed for the murder of Frank Castle (Dolph Lundgren) and his family. Moretti is unapologetic for the murders, nor is he afraid of the mysterious Punisher, the scourge of the underworld who has killed 125 criminals in the five years since Castle’s death. Moretti returns to his home, but the Punisher, who is the still breathing Frank Castle, kills all of Moretti’s guards and Moretti in front of a drive way full of reporters and paparazzi.

Castle is an ex-police officer who is haunted by the murder of his family during a mob hit. The investigation of Moretti’s death and the Punisher is assigned to Detective Jake Berkowitz (Louis Gossett Jr.). Jake believes that Frank Castle is the Punisher, but his chain of command finds no merit to his claims. Jake is approached by Sam Leary (Nancy Everhard), an investigator who wants to team up with Jake and believes that Castle is the Punisher. The two investigators decide to work together. Sam brings a fresh perspective to the investigation.

With Moretti’s death, Gianni Franco (Jeroen Krabbé) returns to the city to lead the criminal underground after retiring some years before. Franco is organizing a shipment of 600 hundred kilograms of drugs into the city. Franco wants to unify the crime families together to combat the Punisher, as well as turn a tidy profit.

Castle’s only friend is an old alcoholic named Shake (Barry Otto). Shake is a former stage actor who helps keep Castle informed of the criminal underworld, including drug shipments. Castle goes to intercept Franco’s drug shipment, but he is beaten to the punch when a group of Yakuza gang members arrive before him. Franco’s men are all killed, and Castle is injured during the battle.

After the battle, Castle returns to his secret lair in the sewers. He patches himself up and prepares to fight again. Lady Tanaka (Kim Miyori) is the leader of the Yakuza and wishes to use her organization to take over the Mafia families and all their financial interests. Tanaka has her soldiers kidnap all the children of the heads of the Mafia and holds them for ransom to ensure that the Mafia complies with her demands.

Shake informs Castle about the kidnapping of all the children. The alcoholic tells him that the children will likely be sold into the slave trade regardless of whether the Mafia families give into the Yakuza’s demands. Castle is initially unsympathetic to the Mafia members’ plight, but reconsiders and gets involved. All the Mafia leaders decide to agree to Tanaka’s ransom terms except Franco. Meanwhile, Castle begins attacking Yakuza businesses and warns the gang that for every day the children are held in captivity, he will inflict heavy costs on them in property damage. The police investigate Castle’s handiwork, and when they learn of the kids being kidnapped, some officers believe that the Punisher is the most likely suspect. Jake disagrees.

Soon after, Shake receives information that the kids are being held at a fun park, and he and Castle go to investigate. The lead turns out to be trap set by the Yakuza, and they capture and torture the two men. Castle frees himself and he and Shake escape after torturing one of Tanaka’s men for information concerning the children. Meanwhile, Jake and Sam begin searching the sewers believing that they will find Castle’s secret hide out. Jake reveals to Sam that he used to work with Castle when he was police officer and that they became friends. At the same time, Tanaka meets with the Mafia heads who agreed to her ransom and has them all killed.

Castle decides that the only way to save the children is a direct assault. He saves most of the children and drives them to safety on a stolen bus. However, Tommy Franco (Brian Rooney) is not with the other children due to him attacking Tanaka when she visited the kids. Castle leads the Yakuza in a car chase using the stolen bus. Eventually, Castle drives the bus into a police road block. Castle is arrested, and Jake comes to interrogate him. Jake expresses his frustration that Castle didn’t reach out to him for help before killing all the criminals. He also informs Castle that he is likely going to receive the death penalty for his crimes.

Soon after, Castle is being transported to a more secure location. Sam accompanies him and informs him that Jake resigned from the force after talking to Castle in jail. Their conversation is interrupted when Franco’s men hijack the police truck and kidnap Castle. They take the Punisher back to Franco’s headquarters. Franco asks Castle to help him save his son, and when the Punisher says no, he threatens to kill Jake, whom Franco’s men have kidnapped. Castle reluctantly agrees but informs Franco that he will kill him after they are done.

Castle and Franco raid the Yakuza headquarters, using Shake to detonate timed explosives from the sewer. They kill all the Yakuza, including Tanaka and her adult daughter (Zoska Aleece), and free Tommy. Castle is severely wounded from the raid. Franco attempts to kill Castle, and the two men get into a prolonged fight, ultimately struggling for the lone gun in the room. Franco is shot in the side of the chest during the struggle and dies. Tommy picks up the gun and threatens to kill Castle in revenge. Castle tells the young boy to do it, but Tommy ultimately cannot bring himself to pull the trigger. Castle embraces the boy and warns him to stay good or that he will back for him.

Jake and the police finally arrive. Jake looks for Castle and follows a blood trail to the roof. However, Castle is gone. The film ends with Castle meditating in the nude in his sewer hideout. Castle swears to continue the fight to punish the guilty.