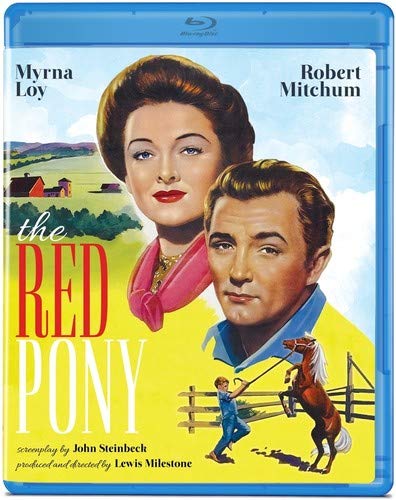 Olive Films has announced that that they are bringing Lewis Milestone‘s The Red Pony to Blu-ray. The film stars Myrna Loy, Robert Mitchum, Louis Calhern, and Shepperd Strudwick. The Red Pony will be available online and in stores this April.

The Red Pony is based on three of John Steinbeck‘s classic short stories, which are combined to create a powerful family portrait. Young Tom Tiflin (Peter Miles) is unable to find the love and guidance he needs from his parents (Loy and Strudwick). For friendship and support, he turns to easy-going hired-hand, Billy Buck (Mitchum). In an attempt to become closer to his son, Tom’s father gives him a red pony to raise. As the horse becomes the focus of Tom’s life, it ultimately drives the family further apart as Tom turns to Billy for help in rearing his beloved pet. Family ties and Tom and Billy’s friendship are put to the test when the red pony becomes sick and disappears. Directed by Oscar-winning director Milestone with an evocative, rich musical score by Aaron Copland, The Red Pony is one of Republic Pictures’ most distinguished and celebrated productions.

The Red Pony was released in March of 1949 by Republic Pictures. Exact technical specs and supplemental features to be included with this upcoming release are yet to be officially detailed.

Disclaimer: Affiliate links are contained in this post. This means when you click a link, and purchase an item, Movie House Memories will receive an affiliate commission. Advertisers and Affiliate Partnerships do not influence our content. See our Terms of Use about the inclusion of affiliate links on this site for more information.
February 17, 2013
345 1 minute read
Show More
Subscribe
Login
0 Comments
Inline Feedbacks
View all comments
Most Recent Posts
Facebook Twitter LinkedIn Tumblr Pinterest Reddit
Back to top button
Close
wpDiscuz
0
0
Would love your thoughts, please comment.x
()
x
| Reply
Close