In The Ref, when a cat burglar abandons his partner, Gus, in the middle of a heist, Gus takes an irritating Connecticut couple, Caroline and Lloyd, hostage. Gus’ in more than he bargained for when the couple’s blackmailing son and despicable in-laws join the fracas. Quickly, the whole family drives Gus crazy from their petty quarrels. It turns out that for him to get through it is to become the ref and resolve their differences—before the police nab him of course. 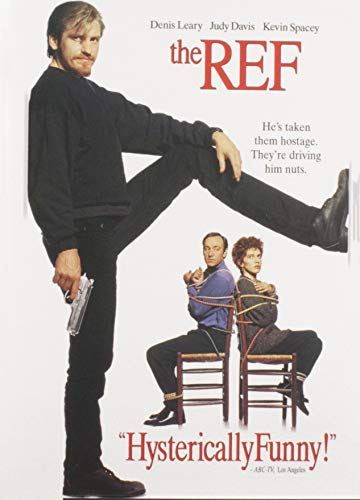 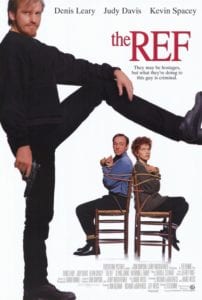 In 1994’s The Ref, Gus is a down-on-his-luck cat burglar. On Christmas Eve, he barely escapes from a house robbery when the alarms there sends him scurrying away. Under extreme pressure, Gus then kidnaps a couple in their own car, and orders them to take him to their home. The three of them will then hideout from the police’s search party.

The kidnapped couple, Caroline and Lloyd incessantly bicker, and we see pretty quick that they basically hate each other; neglecting family members along the way. While keeping them hostage, Gus is not prepared for the verbal abusive assault these two have towards each other and to make it worse, their relatives are on the way to the house.

The extended family members are taking their time getting there because the know Caroline can’t cook to save her life. So they stop off to eat elsewhere first.

The police pick up the search

With the police now nearby; doing house calls in the local vicinity, Gus begins to get to know his trapped couple more than he’d ever care to know and vice versa. Not able to handle their fighting, he basically tells them to follow his rules while the relatives are there to celebrate festivities.

Murray is the mate of Gus who is looking for a way out for his criminal buddy (even though Gus abandoned him earlier in the middle of the heist). He decides a boat is a good idea, albeit rundown and not reliable. The wayward son, Jesse, despises his parents, Caroline and Lloyd, wholeheartedly, and he takes a shine to Gus.

Eventually, Jesse helps him escape, as do the whole family after Gus takes them hostages themselves for a short period, as the truth of Gus’s big heart is revealed. Caroline and Lloyd reconcile, and per the Christmas spirit, alls well that ends well. Gus escapes authorities on the rickety boat with Murray; leaving the family closer together than they were when he first arrived while also probably rectifying his thieving ways.