Everyone`s favorite muck-encrusted plant-man is back in this tongue-in-cheek action-adventure starring Louis Jourdan and sex kitten, Heather Locklear. Sequel to the original cult classic Swamp Thing and based on the award-winning D.C. Comics series, this visually dynamic film plants our moss-infested superhero in a dangerous love affair. 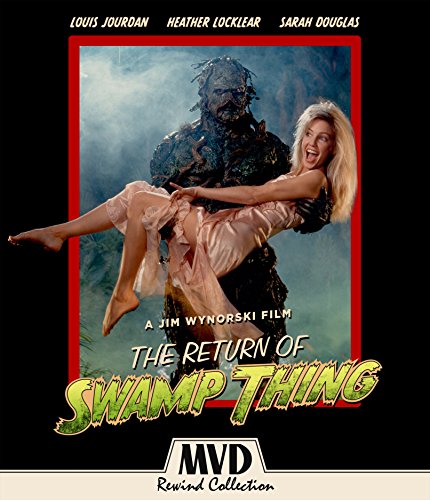 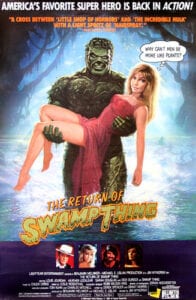 The Return of the Swamp Thing begins in the dark swamps of the American Southeast. A group of five United States Treasury agents are attempting to conduct a night time raid on some illegal moonshiners. The five men have gotten themselves lost in the swamp and can’t find the moonshiners’ stills. One of the agents stops to urinate and is attacked by a giant man-leech. The agent is pulled under the water and disappears.

The other four agents go to investigate and another agent is attacked and killed by the man-leech. The remaining three agents retreat and attempt to get back to their vehicle. Two of them run into Mr. Gunn (Joey Sagal) and Miss Poinsettia (Monique Gabrielle), two employees of Dr. Anton Arcane (Louis Jourdan). Gunn and Poinsettia tranquilize the two agents and take them back to Arcane’s laboratory. The sole remaining agent is attacked by the man-leech, but Alec “Swamp Thing” Holland (Dick Durock) arrives and saves him.

Next, we see Arcane at his mansion in the swamp. Somehow Arcane has survived the events of the first Swamp Thing movie where it appeared that Swamp Thing killed Arcane. He is conducting genetic experiments with Dr. Lana Zurrell (Sarah Douglas) and Dr. Rochelle (Ace Mask). The trio are trying to splice human subjects with various animals and plants in the hopes of finding a subject that shows extraordinary regenerative abilities. The two captured Treasury agents are just the latest subjects. The scientists have not been successful so far. Arcane stills wishes to capture Swamp Thing and has his men conduct various searches for the elusive hero.

Arcane is visited by his estranged step-daughter Abigail “Abby” Arcane (Heather Locklear) who is trying to find out why Arcane did not inform her of her mother’s death. Arcane believes that he might be able to use some of Abby’s DNA to help with his experiments. He convinces her to stay and gives her an expensive ring that cuts her finger. Arcane and Zurrell use the blood to run some preliminary tests.

Meanwhile, the man-leech creature attacks two kids, Omar (RonReaco Lee) and Darryl (Daniel Taylor), who have been left alone at their home in the swamps. The two kids are about to be killed when Swamp Thing arrives to save them. The two swamp creatures battle causing both homes and all the cars surrounding them to burst into flames. Eventually, the man-leech catches on fire and has to flee to the swamp to put out his fiery body.

One night, Abby goes for a walk in the swamp by herself. She is followed by Mr. Gunn and Miss Poinsettia who have been tasked by Arcane to surveil her. Abby runs into a couple of drunk moonshiners that wish to have their way with Abby. Swamp Thing shows up and saves her. He warns Abby that she should leave Arcane’s mansion because it is dangerous, but Abby insists that she will still stick around to find out what happened to her mother.

Suddenly, several of Arcane’s men jump out and capture Abby. The men proceed to shoot at Swamp Thing, and ultimately use an explosive projectile that blows the hero into small pieces. Arcane arrives and tells his men to find whatever remains of Holland and takes Abby back to his mansion. He tells Abby that her mother died working on an experiment with him, and that Abby’s genetic makeup makes her the perfect candidate to help him continue with the experiment.

Abby is placed in a cell guarded by Gunn. She is able to talk her way out of the cell by implying that she will provide sexual favors. She is able to escape from Gunn and tries to get out of the mansion. Rochelle informs Arcane that they may need to use and kill Dr. Zurrell to complete Arcane’s experiments. Zurrell overhears the conversation. Feeling betrayed, Zurrell helps Abby escape by giving her car keys. She later injects Rochelle with the transformation formula and places him in a cell. Swamp Things enters the mansion through the pipes from the swamp. As liquid goo, he is able to slide into a bathtub and reform. Swamp Thing helps Abby get out of the mansion and they escape by car.

In the swamp, Abby confesses her affection for Swamp Thing, and he begins to reciprocate her feelings. She asks if he can have a sexual relationship, and he responds by giving her one of tubular appendages to eat. The appendage acts as a hallucinogenic, and she dreams about having sex with a human Holland. She asks if it was real when she awakes, and Swamp Thing says it is as real as she wishes it to be.

The next day, Omar and Darryl are in the swamp trying to get a picture of Swamp Thing when they are harassed by Gunn and Arcane’s men. They call for help, and Swamp Thing arrives and takes out the men with a baseball bat. However, Arcane and Poinsettia are able to abduct Abby while Swamp Thing is preoccupied. They take her back to Arcane’s mansion.

Once at the mansion, Arcane and Zurrell hook Abby up to a machine that will suck out her life essence and place it into Arcane who needs it to stay alive. They drain Abby completely and she dies on the table. Arcane feels better than ever but realizes that something is wrong when he sees unusual growths in his palm. He realizes Zurrell has betrayed him and changed something in the process. He shoots and kills her. Swamp Thing shows up to rescue Abby, but finds her dead. He attacks Arcane, who is pinned under a heavy metal door when a transformed Rochelle breaks out of his cell and attacks Swamp Thing.

Swamp Thing throws Rochelle into the incinerator chamber, killing Rochelle. However, the chamber goes into overload and the entire mansion is threatened with self-destruction. Swamp Thing collects Abby’s body and escapes just in the nick of time. Arcane presumably perishes in the fire. Once in the swamp, Swamp Thing uses some of his life essence to bring Abby back to life. She awakens and they embrace. Abby decides to stay in the swamp with Swamp Thing, who warns her that there may be some side effects from her receiving his life essence. The film ends with a close up on Abby’s feet as a flower blooms out of the top of her foot.