Audrey Stockman and Morgan Freeman are two thirty-year-old best friends/roommates who live in Los Angeles. Audrey’s boyfriend Drew has recently broken up with her, via text. She is extremely depressed and believes that her life is very stagnant. However, she and Morgan are soon thrown into an international conspiracy when Drew returns and tells her that he is a spy who needs to have a fantasy football trophy delivered to Vienna. Soon after, the girls find themselves being pursued by international spies and assassins in a constant fight for their lives. 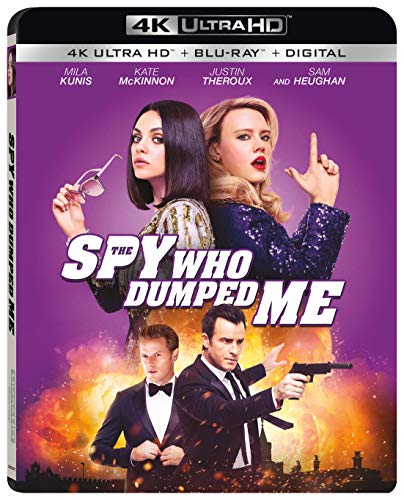 SPY WHO DUMPED ME [Blu-ray]

‘The Spy Who Dumped Me’ Movie Summary 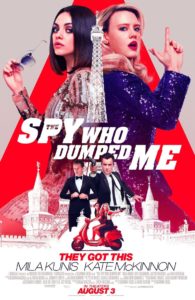 Audrey Stockman (Mila Kunis) is celebrating her birthday party with her best friend and roommate Morgan Freeman (Kate McKinnon). Audrey has recently been dumped by her boyfriend Drew Thayer (Justin Theroux) via a text message. Morgan spends the evening trying to convince Audrey to burn all of Drew’s things, and eventually, Audrey gives in. They send a text message to Drew informing him of their plans. Unbeknownst to Audrey, Drew is an actual government agent. He is in Vilnius on the run from armed men. He calls Audrey in Los Angeles and promises to return for his things, especially his fantasy football trophy.

One day at work, Audrey flirts with a customer who unexpectedly forces her into a van. The man identifies himself as Sebastian Henshaw (Sam Heughan) and tells Audrey that he and his colleague Topher Duffer (Hasan Minhaj) work with Drew in international intelligence. They inform Audrey that they are attempting to locate Drew and ask her to inform them if Drew contacts her. Audrey returns home, and Drew arrives shortly afterwards. Suddenly, a sniper opens fire on the apartment and Audrey and Drew duck and cover. Drew grabs his trophy and asks Audrey to give it to his contact at a café in Vienna. A man that Morgan brought home from Audrey’s party the night before suddenly comes out of Morgan’s room naked and with a gun. He shoots Drew in the head. Morgan pushes the naked man off the balcony, killing him. Audrey and Morgan flee the apartment as federal agents begin to raid their place. Morgan convinces Audrey to deliver the trophy to the contact in Vienna. They fly to Vienna with a suitcase of decoy trophies.

At the café, Sebastian appears again and demands the trophy at gunpoint. Audrey complies, but Morgan causes a scene that allows her and Audrey to escape the café. The pair outmaneuver armed motorcyclists after their rideshare driver is killed. Audrey reveals to Morgan that she still has Drew’s trophy. Sebastian realizes that Audrey gave him a decoy while he is on a video call with his MI-6 superior Wendy (Gillian Anderson). Meanwhile, an unknown person contacts Russian assassin/runway model Nadedja (Ivanna Sakhno) and hires her to kill Audrey and Morgan and retrieve the trophy. At the same time, Audrey and Morgan steal passports from another pair of women and board a train to Prague. On the train, the girls accidentally break the trophy and discover that it contains a USB flash drive inside.

Once in Prague, Morgan calls her parents, Arnie and Carol Freeman (Paul Reiser and Jane Curtin), who are attorneys. They tell their daughter to seek out their friend Roger in Prague. At his apartment, Audrey discovers that “Roger” (Fred Melamed) is yet another spy who killed the real Roger and has been hired to capture the girls. Nadedja arrives at Roger’s apartment, and she and Roger drug Audrey and Morgan. The girls awaken in an abandoned gymnastics training facility and are confronted by a couple that Audrey believes are Drew’s parents (James Fleet and Carolyn Pickles) but are actually buyers seeking the hard drive. They threaten the girls to learn the location of the flash drive. Audrey tells them that she flushed it down the toilet at Roger’s place. The buyers depart and leave the girls to be tortured by Nadedja. However, Sebastian arrives and saves the girls, despite his orders to the contrary from his superiors.

Audrey and Morgan are taken to Wendy in Paris. They once again explain that they flushed the flash drive in Prague, and Wendy orders them to be placed on a plane back to the United States and places Sebastian on administrative leave. Sebastian is given the task of taking the girls to the airport. During the drive, Audrey confesses that she hid the drive in her vagina. She turns the drive over to Sebastian. The trio contact Morgan’s friend Edward Snowden (Tom Stourton) in Russia, who helps them hack and decrypt the flash drive. They discover that the drive contains a universal backdoor and that the couple seeking it are the heads of the Highland crime syndicate.

The trio travel to a hostel in Amsterdam, where they are attacked by Duffer, who wants to acquire the flash drive for himself so that he can sell it. The traitor is killed by the trio’s hostel roommate, who assumes they were being robbed. Audrey uses Duffer’s phone to send a text message to the mysterious person trying to acquire the drive. The party agrees and directs them to a private party in Berlin to make the exchange. The trio kidnap the Canadian ambassador and his wife so that Audrey and Sebastian can impersonate them to get into the party undetected. Morgan poses as a member of an acrobatic troupe to get in. Sebastian is attacked at the party. Morgan is also attacked by Nadedja while she is on the trapeze. Morgan knocks the assassin off the high wire, and Nadedja is impaled on an anchor after the fall.

Meanwhile, Audrey meets the unknown buyer, who is revealed to be a very much alive Drew. Drew tells Audrey that Sebastian is working for Highland. A moment later, Sebastian arrives when he is brought in at gun point by Drew’s “parents”. Drew kills his fake parents. Both he and Sebastian accuse each other of betraying Audrey. Drew shoots Sebastian. Audrey pretends to be glad before grabbing Drew’s gun. Drew attacks her, but she is saved by Morgan who subdues Drew with a cannonball. Drew is arrested a short time later.

Sebastian survives the gunshot wound. Morgan uses Sebastian’s phone to call her parents to let them know she is alive. She answers a call from Wendy to Sebastian. Wendy informs her that Sebastian’s suspension is lifted. Morgan begs her for a job as a spy. Meanwhile, Audrey and Sebastian share a kiss together. A year later, Morgan and Audrey celebrate Audrey’s birthday in Tokyo. They are revealed to be on an assignment with Sebastian as they are all working as international spies.