The Suicide Squad is back with another mission to save the world. This time the team is led by Bloodsport, a reluctant villain who just wants to protect his daughter. He is joined by prior Squad members Harley Quinn, Captain Boomerang, and Rick Flag as well as new members Polka-Dot Man, King Shark, Ratcatcher II, and Peacemaker. They are sent to the South American island nation of Corto Maltese where they are tasked with destroying a secret, scientific facility before the new government of Corto Maltese can use it against the world. 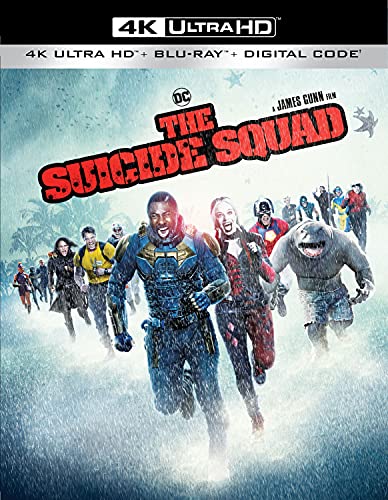 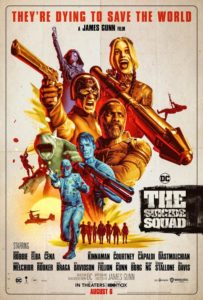 Amanda Waller (Viola Davis) dispatches her infamous Task Force X aka the Suicide Squad to the South American island nation of Corto Maltese. The government has been overthrown by an anti-American regime and Task Force X has been given the assignment of destroying the Jötunheim laboratory which holds a secretive experiment known as “Project Starfish.” The team, led by Colonel Rick Flag (Joel Kinnaman), consists of Harley Quinn (Margot Robbie), Captain Boomerang (Jai Courtney), Savant (Michael Rooker), Blackguard (Pete Davidson), T.D.K. (Nathan Fillion), Javelin (Flula Borg), Mongal (Mayling Ng), and Weasel (Sean Gunn). The team is ambushed on the beach by Corto Maltese forces led by Major General Mateo Suárez (Joaquín Cosío) after Task Force X is betrayed by Blackguard who happens to be the first to die. Everyone is killed except Harley, who is captured by Mateo, and Flag, who escapes. However, the entire team was a diversion for a second Task Force X team to safely land on a different part of the island with the same mission. This team is led by Bloodsport (Idris Elba), Peacemaker (John Cena), King Shark (Sylvester Stallone), Ratcatcher II (Daniela Melchior), and the Polka-Dot Man (David Dastmalchian). The second team successfully lands unmolested on the island and begins their mission.

I love the rain, it’s like angels are splooging all over us! Harley Quinn (Margot Robbie)

However, a short time later, Waller redirects Bloodsport to lead his team on a side mission to rescue Flag. Waller informs Bloodsport that Flag has been captured by enemy forces. Task Force X enters the camp and kills nearly everyone present as Bloodsport and Peacemaker make a competition of who can kill the most people. They find Flag in a tent with Sol Soria (Alice Braga), the leader of the rebel forces standing against Mateo. Task Force X realizes that they just massacred an entire platoon of friendly forces. Despite this, Flag convinces Sol to collaborate with the Squad to accomplish their mutual goals.

Sol helps the Squad infiltrate the Corto Maltese capital. They implement a plan to capture the Thinker (Peter Capaldi), the metahuman scientist in charge of Project Starfish. Meanwhile, Harley awakes to find herself imprisoned in the Presidential Palace with the acting dictator of Corto Maltese, Silvio Luna (Juan Diego Botto). Silvio attempts to woo Harley, believing a marriage between the famous American anti-hero and himself would be popular with the people of Corto Maltese. The couple has sex, but Harley kills Silvio afterwards indicating that she is done being someone else’s kept woman and not wanting to be involved with Silvio’s plans to use Project Starfish against other nations. Harley then works her way out of the palace, killing every soldier that she encounters with Javelin’s javelin, a weapon he bequeathed to her when he died at the beginning of the film. Discovering that Harley is in the palace, Flag organizes the Squad to rescue her, but finds that their efforts are not necessary as she walks out on her own.

Using the Thinker to gain access into Jötunheim, most of the Squad begins placing explosives throughout the facility to destroy it. Flag, Ratcatcher 2, and the Thinker enter the underground laboratory. It is revealed that Project Starfish is actually Starro the Conqueror, a giant alien starfish that can remotely control people by placing smaller versions of itself on their faces. Once a person is controlled by Starro they are effectively dead. The Thinker informs Flag that Starro was brough to Earth by the United States Government, who has been secretly funding the experiments on people in Corto Maltese for the past thirty years. Flag is angered that Task Force X has been dispatched to hide a U.S. Government black site project and decides to take a hard drive to leak to the media.

However, Peacemaker appears and informs Flag that Waller has sent him to make sure that information never sees the light of day. Flag and Peacemaker fight, and Peacemaker kills Flag by stabbing him through the chest. Ratcatcher II ends up with the hard drive and attempts to get away. At the same time, the Polka-Dot Man accidentally detonates some of the explosives prematurely destroying much of the facility. As a result, Starro breaks free from its enclosure, killing the Thinker and launching the mini versions of itself outside the Jötunheim.

Peacemaker corners Ratcatcher II and prepares to execute her when a portion of the facility drops from above and brings Bloodsport face to face with Peacemaker. Bloodsport kills Peacemaker and takes the drive. Outside the facility, Starro takes over the bodies of Mateo and his men. The giant alien begins to roam the island and enslave its inhabitants. With the Jötunheim destroyed and the drive seized, Waller orders the Squad to return to base. Bloodsport decides to lead his teammates in a battle against Starro and disobeys Waller’s orders. Waller prepares to execute the entire team until she is knocked unconscious by her subordinates, Emilia Harcourt and Flo Crawley (Jennifer Holland and Tinashe Kajese).

Polka-Dot Man unleashes all his power onto Starro, injuring the alien. However, he is immediately killed afterwards. King Shark and Bloodsport both attack, but they have minimal effect on the creature. Ratcatcher II summons millions of rats to attack Starro. At the same time, Harley uses the javelin to pierce the one eye of Starro which allows the rats to get inside the alien where the vermin begin to eat Starro from the inside. Starro dies, as do all those under its mind control. Sol and her rebel forces use the incident to seize control of the government and pledges democratic elections. Bloodsport forces Waller to release him and his surviving teammates from imprisonment in exchange for keeping the contents of the Jötunheim’s drive secret. Waller agrees, and the surviving members of Task Force X are airlifted out of Corto Maltese.

In a mid-credits scene, it is revealed that Weasel did not drown at the beginning of the film, but instead got up and walked away after the battle. In the post credits scene, Waller’s subordinates visit an unconscious Peacemaker at the hospital, indicating that his services are needed to save the world.