When Bat Haines steals the cattle from both the Lawsons and the Prestons, he blames the other family for the thefts to stir up trouble. Haines then blackmails the town’s ex-con sheriff into taking no action in the matter. He then attacks a stagecoach that’s transporting the lovely Nancy; the niece of Tex Preston. Buck Lawson rescues her, and the two fall in love. Billy then battles Haines to stop the feud and live happily ever after. 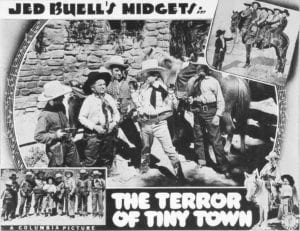 The Terror of Tiny Town begins with an MC introducing us to a novelty picture with an all midget cast…the first of its kind…ever to be produced. It has everything a western should have!

The film’s hero, Buck Larson, walks on stage, and interrupts the MC. He says the film is a serious one, and he will soon be the biggest star in Hollywood. Then the film’s villain, Bat Haines, interrupts Buck to say that HE will be the biggest star in Hollywood. The men start to fight, but the MC intervenes, and starts the film.

It opens with the townspeople singing a song about laughing their troubles away. Buck Larson’s dad, Pop, has his son head out to see why all his calves are disappearing. Bat Haines and his outfit are busy roping one as Buck rides up and spots them. The gang rides off on their Shetland ponies before Buck can identify them.

They leave behind the brand of a nearby rancher named Tex Preston to make it look like he’s the one rustling cattle. They then head to Tex’s place to tell him that the Larson outfit is shooting his cattle. You see, Pop Larson and Tex had fought to a standstill 15 yers earlier and Bat is using that bad blood to get both men to take each other out…and to steal both men’s cattle and land.

Tex goes to town to pickup his niece, Nancy Preston, arriving on a stagecoach that day. Tex is now her only living relative after losing her parents, and will live with Tex. In town, Bat shows up, and orders the sheriff to stay out of the new Larson/Preston feud, or he will have the sheriff sent back to prison.

Bat and his outfit plan to rob the same stagecoach that Nancy’s coming into town on because it’s hauling some money. Bat and the boys manage to kill the two stagecoach drivers, but Buck and gang see the attack, and run up to stop it. Bat flees as Buck stops the runaway carriage. Buck helps Nancy off the stagecoach, and the two begin a little romance on the way back to town.

Since Uncle Tex and Pop Larson are a fuedin, Buck and Nancy meet in secret when they can. However, Pop discovers the two together while they picnic on his land, and he orders them to stay away from each other.

Nancy begins to ride home alone, but Buck chases after her. Bat is always spying in the background, and he spots the lovebirds too. When he tells Tex that the two are a couple, Tex heads off to confront them himself. He orders Nancy home, but Buck stays to talk some sense into Tex.

The two forge a truce when Buck convinces Tex that someone else has stolen their calves. As Buck leaves to get his father on board with their truce, Bat shoots Tex in the back, killing him. Buck shoots at Bat, but he gets away, and heads off to tell Nancy and Tex’s men that Buck killed Tex.

Bat then forces his sheriff crony to arrest Buck for Tex’s murder. Buck heads to Tex’s plantation to convince Nancy he didn’t kill her uncle. It’s there he figures out it is Bat who’s causing all the trouble in town. So, he heads out to confront Bat.

Buck finds Bat in the saloon, and punches him in the kisser, but the Sheriff arrests him as ordered. Meanwhile, Bat hatches a plan to hang Buck without a trial and rallies the townsfolk for a bit of vigilante justice.

The people surround Buck to lynch him, but the Sheriff intervenes. Bat quickly shoots and kills him. He confesses that Bat is both the killer AND the town’s trouble maker before dying of his wounds. Bat escapes through a back window before Buck’s dad and outfit arrive.

Now free, Buck chases Bat to his (no longer) secret hideout. Before the two arrive, a dance hall girl named Nita lights some dynamite, and hides it under some floor boards in retaliation for Bat jilting her for Nancy.

Bat arrives with Buck following closely. The two have a fist fight in the cabin, and Buck is able to knock Bat senseless. As the cabin is about to blow up, Nancy arrives with Pop and his boys. She calls out to Buck, and he runs to her. Bat gets up, and takes aim at Buck. As he gets ready to shoot Buck in the back, the cabin explodes; killing the Bat man.

With the feud over, Buck and Nancy kiss; setting us up for the sequel, The Joy of Pound Town.