Nick and Nora Charles head to Nick’s hometown of Sycamore Springs with their dog, Asta, and without their son, Nick Jr, to spend some time with his parents who couldn’t care less to see their only grandson. Nick’s father is a prominent local physician who is quite disappointed with Nick’s choice of profession and his lifestyle in general. However, when Nick arrives, many of the townsfolk, including several local criminals, believe he’s there to work on a case despite his insistence that he’s just there for rest and relaxation. When an aircraft factory employee named Peter Berton winds up dead on his doorstep from a gunshot, Nick finds himself working on a case whether he wants to or not. After several more murders occur, Nick gathers everyone into the same room to reveal the true identity of the killer… leaving Daddy Charles impressed. 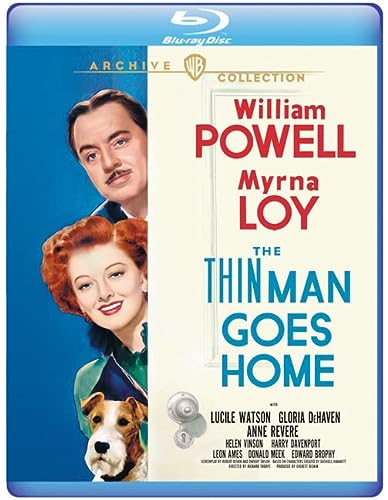 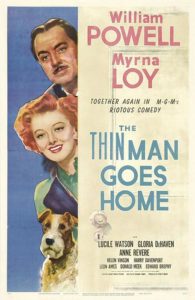 In The Thin Man Goes Home, Nick Charles (William Powell) takes his wife, Nora (Myrna Loy), to his childhood home in Sycamore Springs to visit his parents. Nick doesn’t visit much because he and his father, Dr. Bertram Charles (Harry Davenport), grew apart after Nick decided not to follow in his father’s footsteps and become a doctor—instead opting to be a detective which his father believes to be beneath him. He also doesn’t approve of Nick’s partying ways.

After Nora fails to impress Dr. Charles with tales of Nick’s famous cases, she wishes there would be a local case Nick could solve to prove to her father-in-law that Nick’s profession is not beneath him. Even without an existing case, the locals are already convinced that Nick’s in town on an investigation—even though he repeatedly denies it to them. However, when an aircraft factory employee named Peter Berton (Ralph Brooks) seeks out Nick for help, someone shoots him dead before he can reveal anything.

An old childhood friend named Dr. Bruce Clayworth (Lloyd Corrigan ) performs an autopsy and extracts a bullet from the dead man. Even though nobody heard a gunshot, Clayton reveals to Nick the path the .45 ACP took through Berton’s body. The murder brings in Police Chief MacGregor (Donald MacBride) who is stereotypically headstrong and doesn’t need a private dick butting in on his investigation, BUT Nick heads to Berton’s motel room before MacGregor can and switches room numbers before he arrives so that he can conduct his own investigation. However, a mentally unwell local woman named Crazy Mary (Anne Revere) is already in the room and she knocks Nick unconscious.

The next day, Nick questions the very dramatic Laura Ronson (Gloria DeHaven) who is the daughter of the local banking tycoon (and prominent member of the board of the aircraft factory) Sam Ronson’s (Minor Watson). She is somehow involved with Berton and her very jealous boyfriend, Tom Clayworth (Paul Langton). Tom is the brother of Dr. Clayworth, and he doesn’t seem to like Berton at all. Something about Nick’s line of questioning displeases Sam and he makes it known to Nick and that if he doesn’t stop, he will not agree to fund his father’s hospital. He even goes as far as threatening Dr. Charles the next dat that if his son doesn’t leave town soon, he will cancel Charles’ new hospital. Daddy Charles balks and tells him to pound sand and Nick continues on with his investigation.

Soon one of Nick’s men on the street, Brogan (Edward Brophy), provides him with records from a Boston orphanage which reveal Crazy Mary is Berton’s biological mother and she’s been watching over him since he moved to Sycamore Springs to work for Sam.

Meanwhile, in the side adventures of Nora Charles, Nora has bought Nick a painting at a local shop for his birthday that the deceased Berton painted. However, when Nick sees it, he tells her how much he hates the windmill in the picture. She asks the Charles’ maid, Hilda (Anita Sharp-Bolster), to burn it, but Nick’s mother (Lucile Watson) decides to donate it to a local charity for their bazaar. We find out that a man named Edgar Draque (Leon Ames) wants the painting and her offers Nora $500 for it when she gets stuck at a seedy pool hall while tailing Brogan, thinking hers the real killer.

Nora returns home to tell Nick about the offer and the two rush to the charity ball to get the painting back. However, Draque’s wife, Helena (Helen Vinson), winds up buying the painting first. When Nick pays her a visit in her hotel room, he finds someone has knocked her unconscious and robbed her of the. This leads Nick and Nora to head over to Crazy Mary’s shack, where they find Crazy Mary dead from a gunshot wound from her own rifle (which was burned in her own fireplace). The painting is hidden behind the door in her shack.

The next morning, Nick has all the information he needs and in his usual fashion, has the police invite all the suspects to gather in Dr. Charles’ lab. Using his father’s fluoroscope, Nick reveals a blueprint hidden underneath the picture’s paint. It’s part of a new aircraft propeller which is worth a great deal to foreign powers. Berton had copied the blueprints and concealed the copies under five paintings—which his boys in New York bought from a local “dealer” and returned to Sycamore Springs as the big reveal got under way.

It seems somewhere along the line, Berton had a change of heart and was going to confess everything to Nick, but someone killed him first—but who? Next Nick reveals that Berton was the illegitimate son of Sam’s playboy brother who ran off to Boston with his housemaid, Crazy Mary. Unfortunately, Sam’s brother died in a bar fight before they could get married. Sam found Berton in the orphanage and took him back to Sycamore Springs to look after him, but Berton managed to get himself killed anyhow.

Nick then proves that the Draques were buying Berton’s paintings and selling them for thousands in New York, but they were working for someone, and that someone killed Berton. Nick reveals that no one heard the shot that killed Berton because the murderer used a World War II Japanese Nambu sniper rifle equipped with silencer. Dr. Clayworth’s ids the gun as belonging to his brother, Tom, who was a World War II veteran in Southeast Asia.

But Nick says Tom isn’t the killer because Tom was in Boston, which Laura confirms. He says Dr. Bruce Clayworth killed Berton that night after he visited Bruce to tell him he was going to reveal everything to Nick. Clayworth’s first slip up was the bullet he showed Nick. He knew that the. 45 Clayworth says came out of Berton’s body would not have the power or position to penetrate into Berton’s body as the real one did. So Clayworth must have used the Nambu sniper rifle with a silencer and switched the bullet during the autopsy.

Clayworth confesses to the murder and immediately grabs the rifle in an attempt to kill Nick because he’s been harboring a deep hatred for him since youth when he always did better than him in everything. When he pulls the trigger, it only clicks… not bullet shoots out. That’s because Nick had Brogan remove the firing pin before arriving.

With the case wrapped up in a neat little bow, Nick’s father is finally impressed with his son and his line of work. He gives him a warm pat on the back which makes Nick’s buttons pop off his vest for a happy ending.