The world is stunned when a group of time travelers arrive from the year 2051 to deliver an urgent message: Thirty years in the future, humanity is losing a global war against a deadly alien species. The only hope for survival is for soldiers and civilians from the present to be transported to the future and join the fight. Among those recruited is high school teacher and family man Dan Forester. Determined to save the world for his young daughter, Dan teams up with a brilliant scientist and his estranged father in a desperate quest to rewrite the fate of the planet. (Courtesy of Skydance Media) 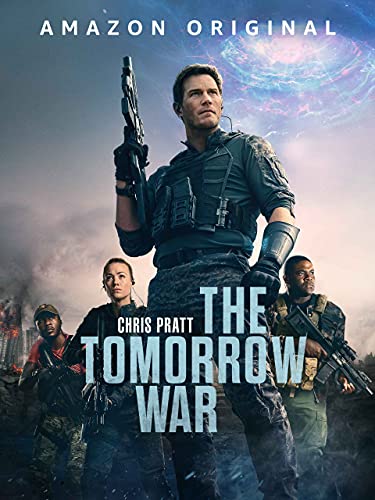 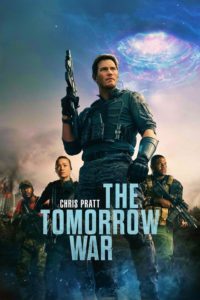 The world in December 2022 is a peaceful place with very pedestrian problems. Dan Forester (Chris Pratt), a high school biology teacher and a former Green Beret, attempts to get a job at a prestigious research center. However, he is dismayed to discover that he did not get the job. That night, during a Christmas party, Dan is watching the World Cup with his wife, Emmy (Betty Gilpin), and his young daughter Muri (Ryan Kiera Armstrong). Suddenly, a group of human soldiers from the year 2051 appear from a time portal in the middle of the field. The leader of the soldiers, Lieutenant Hart (Jasmine Mathews), informs the planet that in the future humanity is on the brink of extinction due to a war with alien invaders referred to as the Whitespikes. Lt. Hart tells everyone that the Whitespikes suddenly appeared in November 2048 and killed most of humanity within the next three years. The future soldier states that they have been sent back to bring human forces to the future to fight the aliens.

The world’s militaries react by sending forces into the future for a seven-day deployment via a wormhole device called the Jumplink, but fewer than 30% of the soldiers survive the deployment. As a result, the world institutes an international draft. Months later, Dan receives a notice that he has been drafted. The future military places a draft tracker band on his arm and gives him time to settle his affairs. Dan tells his wife, who encourages him to go on the run after seeing the effects of PTSD on the returning soldiers from the future. Emily tells Dan to visit his estranged father, James (J.K. Simmons), to help him remove the tracker from his arm. James left Dan and his mother after he returned from the Vietnam War because he felt it was dangerous for him to stay. James and Dan get into an argument that ends with Dan calling his father a coward and insisting that he does not want his father’s help.

Days later, Dan reports to basic training after promising his daughter that he will return. At training, the almost exclusively civilian soldiers are instructed on basic military techniques and what they can expect from Whitespikes. Dan befriends another draftee named Charlie (Sam Richardson) and they theorize that those drafted have already died before the war starts to prevent a potential time paradox. Dan and his fellow draftees are sent forward in time to a battlefield on Miami Beach. The draftees materialize several hundred feet in the air, and most of the draftees plunge to their deaths. Dan, Charlie, and others fall into a swimming pool which prevents their deaths.

They have no use for prisoners or government, technology, money… nothing. We are food. And they are hungry. Colonel Muri Forester

Dan and his group are contacted by Colonel Forester (Yvonne Strahovski) who orders the new soldiers to rescue nearby lab personnel and research before the area is sterilized by incoming aircraft. Dan and Dorian (Edwin Hodge), a draftee who has cancer and is on his third tour, lead the assault team to the facility but discover all the lab personnel are dead. They collect the research and then begin a hurried escape to an extraction point. Dan leads the group towards the extraction area, fighting Whitespikes continuously along the way. Dan often slows to help injured soldiers which costs the entire group precious time. Dan’s group does not get entirely clear of the area before the bombing, and everyone dies except Dan, Charlie, and Dorian.

Dan awakens at a military encampment in the Dominican Republic. He immediately reports to Colonel Forester who turns out to be his adult daughter Muri. Muri is distant from her father, but she does request that he accompany her on a mission to capture a female Whitespike. She explains that the females are rare and that they need one to continue their research. Muri and her team capture and cage the female with Dan’s help, but they are immediately attacked by hundreds of male Whitespikes. The helicopter with the female escapes, but Dan and Muri must escape on land. They make it to a nearby beach and radio for rescue. While waiting, Muri explains that in her past, Dan did not get the research center job and became dissatisfied with his life. Ultimately, he left Muri and Emily and died in a car crash in 2030. Haunted by memories of his own father’s abandonment, Dan is adamant that he would never abandon his family. He promises Muri that when he returns to the past that he will not leave his family. Muri and Dan are rescued and taken to a fortified oil rig close to Port Nelson where both the female Whitespike and the Jumplink are located.

On the oil rig, Muri works on a toxin that can kill the Whitespikes, both female and male. She and Dan work together and create a biological weapon. However, an army of Whitespikes rise out of the sea and attack the base. The male Whitespikes free the captured female and begin killing every human on the base. Muri gives the toxin to Dan and sacrifices herself to send Dan back to his time. Dan rematerializes in 2023 with the toxin. However, the Jumplink has been destroyed in the future, so no one else can travel to the future again. The world interprets the Jumplink’s destruction as a sign that the future war is lost.

Back in his own time, Dan begins to contemplate a way to prevent the future he experienced from ever happening. With the knowledge that no one in the future knew where the Whitespikes came from, Emily theorizes that they have been on the Earth much earlier than 2048. Dan consults with Charlie and one of Dan’s advanced science students, Martin (Seth Schenall), who produce the theory that the Whitespikes have been on the Earth since the year 946 and are buried in the ice in Siberia. The pair speculate that global warming allowed the aliens to emerge and take over the Earth.

Dan takes his theory to the Defense Secretary who declines to help Dan and his group with any military resources. Dan decides to go it alone and recruits Charlie, Dorian, a few other surviving future soldiers, and his father James to assist him in proving his theory. The plan is to find and destroy the alien threat with the toxin from the future.

Once in Siberia, they find the alien ship buried in the ice. They discover that the Whitespikes are not aliens themselves but rather a bioengineered weapon designed to clear a planet of indigenous species. The team injects five of the hibernating Whitespikes with the toxin, which kills them. However, the remaining hibernating Whitespikes suddenly awaken, including a queen. Most of the team is killed. Dorian, who wants to die on his own terms, stays behind with some of the soldiers to blow up the ship with explosives. However, one Whitespike, the female, escapes to the ice above. Dan and James team up to hunt and kill the female, injecting it with toxin as well. The only other survivor of the expedition is Charlie.

A few days later, Dan returns home having saved the future. He brings his father home with him to meet his wife and daughter for the first time. Dan begins to make good on his promise to his future daughter to never leave his family.