In the Charlestown section of Boston, Doug MacRay masterminds bank robberies with his three friends: the hotheaded Jem, Des, an electrician; and Al, their driver. After one such robbery doesn’t quite go as planned, Doug makes sure the female bank manager named Claire doesn’t know who they are as she too lives in Charlestown. Doug figures out a way to meet the woman, but he also seems to have ulterior motives. Soon, the FBI investigation zeroes in on the gang, and Doug wants out permanently. While Claire still doesn’t know who he really is, Jem and their money launderer / florist, insist that Doug do one more job (maybe) before he gives up his life of crime. 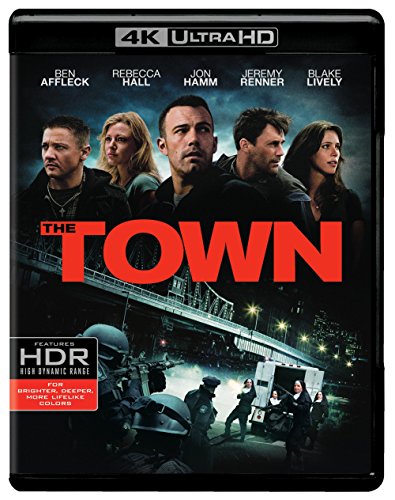 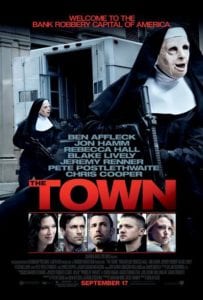 The Town begins in Charlestown, a Boston neighborhood, four men rob a bank. They take one manager, Claire, hostage, and give the other manager a sound beating with the butt of a rifle. After they get away, they leave Claire at the beach and flee.

The robbers are Doug, Jem, Gloansy, and Dez, four locals living a life of crime. Doug follows Claire after the robbery to find out what she knows and how much she’s talked to the police. The boys are pursued by FBI agent Adam Frawley. Doug’s co-conspirator and adopted brother, Jem, grows increasingly nervous with the loose end of Claire. Jem becomes suspicious of Doug after he and Claire nurture a budding romance.

The gang robs an armored truck that turns badly. One of the guards pulls his gun on them, and they shoot him and get away after a high speech chase, shooting police cars along the way. They leave no evidence behind, although FBI agent Frawley knows it was them.

Local Irish crime boss, Fergie, plans another big job for Doug and his gang. They’re going to rob Fenway Park after a big night. Doug is nervous after the last failed job, but Fergie persuades him to take the job, citing his mother’s addictions and his father’s incarceration as means to control Doug. Jem also gives Doug some gentle persuasion, citing the time he did in prison for Doug after shooting another local that intended to harm Doug.

After originally agreeing to run away with Doug, Claire learns that Doug was one of the robbers that kidnapped her. She is coerced into helping the FBI bust the gang. But she tips Doug, and Doug escapes the FBI. The gang is sold out, however, by Doug’s kind-of sister and baby mama, Krista, who is pressured into revealing the gang’s plans to rob Fenway when Frawley threatens to have her child taken by the authorities.

The FBI breaks up the Fenway robbery, but the gang won’t go quietly. One of them makes like he is fleeing so the others can slip out the back dressed like policemen. He speeds away in a van, but is instantly lit up by the police and killed quickly. Doug and Jem slip away, but Frawley follows Jem and kills him in a shootout in the street.

Doug pays Fergie a visit and shoots him dead, along with his bodyguard. Then Doug flees. Later, Claire is gardening. She finds a bag of money from Doug with a note, and she donates the money to refurbish the local hockey rink. Doug, seemingly safe, hides in Florida, alone.