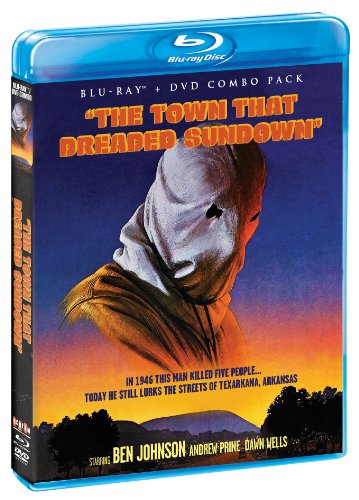 Scream Factory has announced that they are bringing The Town That Dreaded Sundown to Blu-ray this May. The film is directed by Charles B. Pierce and stars Ben Johnson, Andrew Prine, Dawn Wells, and Jimmy Clem.  The film will be released for the first time on Blu-ray and in a Blu-ray/DVD Combo Pack which contains director Pierce’s rare cult movie classic The Evictors as a bonus movie presentation on the DVD.  The Town That Dreaded Sundown will be available in stores on May 21.

In the film, two young lovers are savagely beaten and tortured on a back country road in Texarkana, leaving local police are baffled.  Three weeks later, two more people are slain in a similar setting and Deputy Norman Ramsey fears a pattern might be developing.  Texas Ranger J.D. Morales (Johnson) is brought in to help.  The two officers must find “the Phantom Killer” before he can kill again. The Town That Dreaded Sundown is based on one of America’s most baffling murder cases, this horrifying suspense thriller is a shocking experience you’ll never forget.

The film was released in December of 1976.  A remake of the film is currently under development.  Exact technical specs and supplemental features to be included with this upcoming release, other than The Evictors, are yet to be officially detailed.