Tromaville, New Jersey is a small American town that terrible criminals have overtaken. As the town’s corrupt mayor sits idly by, muggers, robbers, and teenage punks victimize its helpless citizens. Among the residents of Tromaville is a young man named Melvin—a nerdy, emaciated janitor who works at the local health club. That is he’s meek until a gang of thugs decide to toss the poor kid out a third story window into a vat of hazardous toxic waste. An unexpected metamorphosis takes place as the chemicals take hold of his body, and they transform him into the TOXIC AVENGER—doer of good, and brutal mauler of evil! The rest, as they say, is history as our hero sets out to single handedly wipe out the forces of evil that torment the good people of Tromaville. 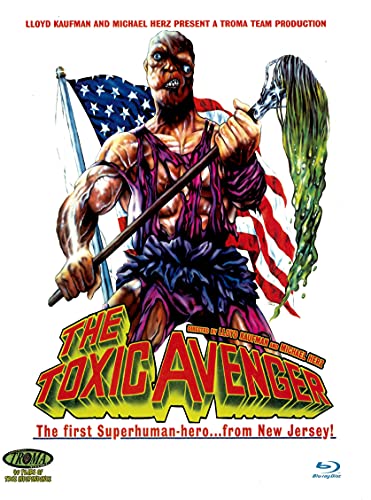 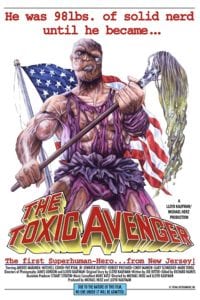 The Toxic Avenger, set in Tromaville, NJ, is about Melvin Ferd, a meek nerd, who works as a janitor at a health club. While he is of no threat to anyone, psychotic health club patrons: Bozo, Slug, Wanda, and Julie bully the kid because he doesn’t look pretty like them, and isn’t as smart as they are.

When the four aren’t tormenting little Melvin, they are busy screwing each other, or running over little boys on bicycles with their bitchen Camero; squishing their little heads. It’s the only way Bozo is able to relieve the stress of his life.

Eventually, the the four manage to humiliate Melvin to the point where he jumps out of a second story window at the health club, and into a barrel of toxic waste conveniently sitting open on a flatbed truck in front of the club. The toxic waste sets Melvin on fire, but also transforms him into a super-sized superhero/vigilante with a delightful voice.

Melvin first uses his super strength to save an Irish cop, named O’Clancy, from Cigar Face’s gang who aims to chop off his little boys when he refuses to take their bribe.

Unfortunately for our new hero, he has a face that his mother doesn’t even love, and she refuses to let him return home. So, Melvin does what we all would do in that situation. He finds the nearest dump with it’s own toxic waste, and builds a home fit for a hot blind girl.

Later that week, Melvin meets a hot blind girl named Sarah at The Mexican Place, Tromavilles’ only Mexican restaurant with a pizza oven and no Mexican workers. He saves Sarah from being raped by three robbers who like to point shotguns at toddlers. The men also shoot her guide doggie before Melvin can rip off their one-armed leader’s prosthetic arm and beat them all with it. Melvin then kills the thugs with the various appliances in the restaurant. Afterwards, Melvin puts his superhero moves on Sarah when he escorts her home, and they begin to fall in monster love.

Melvin returns to the health club to continue cleaning up the town with his fists…and mop. He kills the corrupt mayor’s drug dealer in a weight machine. He kills a pimp and his bodyguards for pushing a 12-year-old girl on him when he specifically gave the pimp instructions for little boys only, and then Melvin gets his final revenge on his original tormentors.

All this death alarms Tromaville’s Mayor Belgoody, but not because Melvin is doing all the work of his police. It’s because Melvin is killing all his hired thugs that bring him money. The mayor has Cigar Face take out Melvin, but Melvin outsmarts Cigar Face again, and he and five other thugs shoot themselves instead.

Melvin then washes, dries, and presses to death a seemingly sweet old lady at the cleaners, but is actually a secret leader of an underground white slave trade. Melvin must have psychic powers at this point too as that’s the only way to explain how he knows this about the women.

Mayor Belgoody uses this killing to call in the National Guard to save Tromaville, and his illegal racket, from Melvin. They track Melvin to a field in Pound Town where he’s pitched a tent with Sarah. The National Guard cock blocks Melvin and he surrenders, but the kids of the town form a human shield around Melvin to save him from being shot. The mayor then reveals his Sith ways to the people and tries to shoot Melvin himself, but Melvin rips out the mayor’s intestines first to see if he really has any guts.

The movie ends with Melvin saving Tromaville, and a promise that he, and his sexy voice, will continue bloody takedowns of unlucky criminals until there is no more crime.