Based on the classic play by William Shakespeare, Joel Coen brings the newest iteration of Macbeth to life. Macbeth is a Scottish lord who is a loyal soldier and friend to King Duncan. However, Macbeth encounters a trio of mysterious witches who inform him of a prophecy that he will become the next King of Scotland, but that his rule will end with him. Obsessed with the prophecy and encouraged by his wife, Macbeth kills his friend and king. However, his guilt over the deed and his desire to remain in power soon drive him mad.

‘The Tragedy of Macbeth’ Movie Summary 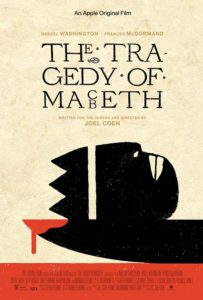 Macbeth (Denzel Washington) and Banquo (Bertie Carvel) are loyal soldiers to King Duncan (Brendan Gleeson). After successfully defeating the traitorous Thane of Cawdor, the two men encounter three mysterious witches (Kathryn Hunter) on the battlefield. The witches prophesize that Macbeth will be promoted from the Thane of Glamis to Cawdor. They also proclaim that Macbeth shall become King, but Banquo shall father an entire line of kings. Both men are dismissive of the witches. A brief time later, King Duncan orders the Thane of Ross (Alex Hassell) to execute Cawdor. The King also names Macbeth the new Thane of Cawdor, just as the witches predicted.

However, Macbeth becomes disenchanted with his king after Duncan names his son Malcolm (Harry Melling) as the Prince of Cumberland, placing Malcolm in a more direct line to the throne than Macbeth. Macbeth is disturbed by the appointment and his apparent obstacle to the throne. Macbeth writes a letter to his wife, Lady Macbeth (Frances McDormand), and informs her of the witches’ prophecies and the political developments that have interfered with his path to the throne.

Lady Macbeth supports her husband’s royal ambitions. Once Macbeth returns home, Lady Macbeth convinces her husband to kill the King so that he may rise to the throne. When King Duncan decides to spend a night at Macbeth’s castle, a hesitant Macbeth carries out the killing by stabbing Duncan in the throat while he sleeps. He frames two of the King’s servants for the murder by drugging them before the killing. The next morning, the Thane of Fife, Macduff (Corey Hawkins), discovers the body, and Macbeth murders the servants before they can speak, feigning anger over the death of his king. Malcolm and his younger brother Donalbain (Matt Helm) suspect foul motives, and the young Prince of Cumberland fears for his life. The two men flee to England, drawing suspicion from some as to Malcolm’s involvement in his father’s death. With Malcolm gone, Macbeth assumes the throne as the new King.

By the pricking of my thumbs, something wicked this way comes… Witch (Kathryn Hunter)

A short time later, Banquo struggles over his knowledge of the prophecy. Suspicious of Macbeth’s involvement in the King’s death, Banquo decides to take his son and leave Macbeth’s castle, aware that the prophecy also discussed his heirs. At the same time, Macbeth is disturbed by the very same thing. Concerned that his ascendency will be brief and will pass onto no heirs, Macbeth plots the death of his friend Banquo and his son Fleance (Lucas Barker). Macbeth hires two cutthroats to complete the task along the roadside. The two assassins are accompanied by Ross as the third killer. The trio is successful in killing Banquo, but Fleance escapes. While the hired assassins return to Macbeth to report their success, Ross pursues Fleance through a field until he finds the young boy. However, Ross does not kill the boy.

Back at the castle, Macbeth becomes increasingly paranoid and begins to hallucinate as a result of his guilt. At a royal banquet, Macbeth sees a vision of Banquo’s ghost and pursues it through the castle, rambling like a mad man. Lady Macbeth attempts to dismiss the incident as a minor affliction in front of their dinner guests. However, Lady Macbeth resorts to drugging her husband to keep Macbeth calm. During one of his drug induced trances, Macbeth is visited by the witches for a second time. The witches conjure a vision of Fleance, who tells Macbeth to beware of Macduff. They also tell Macbeth that he shall be King until Great Birnam Wood comes to Dunsinane Hill, and that he shall be harmed by no man born of a woman. As a result, Macbeth orders the entire Macduff household to be executed. The assassin (Wayne T. Carr) kills Lady Macduff (Moses Ingram) and his son (Ethan Hutchinson). However, Macduff survives having earlier fled to England to join with Malcolm.

Back at Macbeth’s castle, a guilt-ridden Lady Macbeth begins to slowly go insane. She begins sleepwalking and obsessing about the imaginary blood on her hands. Ross secretly visits England and informs Macduff of his family’s murder by Macbeth. Macduff vows revenge, and Malcolm, with the assistance of his England friends, raises an army to overthrow Macbeth. Malcolm leads the army Macbeth’s castle at Dunsinane using the Great Birnam Wood as camouflage, fulfilling one of the witches’ prophecies. Lady Macbeth dies which drives Macbeth further into madness. Macbeth’s madness includes his mistaken belief in his own invincibility. Macduff finds Macbeth and the two men duel. Macbeth states that he cannot be killed from any man born of a woman. Macduff declares he is not born of a woman but instead he was “untimely ripped.” Macduff defeats Macbeth and beheads him. Malcolm is crowned as the new King of Scotland. Shortly afterwards, Fleance is revealed to be alive. Ross secretly takes him away from Scotland so that he will presumedly fulfill the witches’ prophecy to Banquo.