During the 1968 Democratic National Convention in Chicago, there were massive demonstrations against the Vietnam War, which was reaching its peak. When a curfew was finally instated, this led to even further protests, eventually leading to a police riot. Following this, seven of the demonstrators (Abbie Hoffman, Jerry Rubin, Bobby Seale, John Froines, Tom Hayden, Lee Weiner, and David Dellinger) were tried for conspiracy to incite a riot. This is the story of the trial that followed.

‘The Trial of the Chicago 7’ Movie Summary 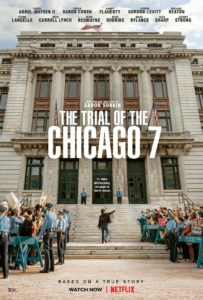 In the summer of 1968, Tom Hayden (Eddie Redmayne), Abbie Hoffman (Sacha Baron Cohen), Jerry Rubin (Jeremy Strong), Rennie Davis (Alex Sharp), David Dellinger (John Carroll Lynch), Lee Weiner (Noah Robbins), John Froines (Daniel Flaherty), and Bobby Seale (Yahya Abdul-Mateen II) all prepare to protest at the Democratic National Convention in Chicago. Although the men have the same agenda, they do not coordinate their plans or work together until they finally meet in Chicago. During the protests, a riot breaks out that throws the city of Chicago into chaos for a brief period. Five months after the incident, all eight men are arrested and charged with trying to incite a riot and conspiracy to use interstate commerce with intent to incite a riot. The United States Attorney General John N. Mitchell (John Doman) appoints Tom Foran (J. C. MacKenzie) and Richard Schultz (Joseph Gordon-Levitt) to act as prosecutors in the case. William Kunstler (Mark Rylance) and Leonard Weinglass (Ben Shenkman) represented all the defendants except for Seale, who was represented by Charles Garry. Garry becomes ill shortly before the trial and cannot attend. Seale is the only black defendant, and the only one to be held in custody during the trial.

The film begins at the beginning of the trial. Judge Julius Hoffman (Frank Langella) shows open contempt for the defendants and the defense in the courtroom as he tries to control the circus that the case has become. When Seale asks for a continuance due to his attorney not being present, Judge Hoffman constantly insists that Kunstler can represent him, something that Kunstler refuses to do. Judge Hoffman denies Seale’s request to represent himself as well. Seale receives support from his friend and fellow Black Panther Fred Hampton (Kelvin Harrison Jr), which Judge Hoffman assumes is legal advice.

Abbie openly antagonizes the Court throughout the proceedings, including dressing as the Judge and ruling on the objections from the defendants’ table. Kunstler and Weinglass are constantly fighting to get evidence in, but they are battling the Judge who continuously rules in favor of the State even when the evidence exonerates the defendants. Despite this, Kunstler and Weinglass believe they still have a good chance due to their read of the two jurors who appear to be sympathetic to the defense. However, the next day in court, the Judge informs the parties that the same two jurors have received death threats from the Black Panthers and that he is recusing them from the case. Kunstler and Weinglass know that the Black Panthers would never have done something so overt and that it was the government pretending to be the Black Panthers that sent the threatening letters. Kunstler believes that they are being bugged by the government that has a win at all cost mentality. Throughout the trial, Judge Hoffman cites the defendants and the defense attorneys with multiple counts of contempt.

We’ve dealt with jury tampering, wiretapping, a defendant that was literally gagged, and a judge who’s been handing down rulings from the bench that would be considered wrong in Honduras, so I’m a little less interested in the law than I was when this trial began. William Kunstler

During the trial, numerous undercover police officers and FBI agents testify as to what they are alleged to have witnessed, causing the defendants to wonder if the eight of them were the only protesters in Chicago during the convention. The film switches to a flashback where Hayden notices two police officers tailing Davis. Hayden tries to help his friend out by letting the air out of the undercover officers’ tires, but he is caught and arrested. Abbie leads a protest to the police station where Hayden is being kept. However, they encounter a police blockade and decide to return to the public park then engage in confrontation. Abbie and Dellinger go by themselves to bail out Hayden. Meanwhile, the protesters encounter another police force at the park when they return. The police order the group to disperse, but a riot ensues when the angry crowd challenges the police for the park. None of the eight defendants are shown to initiate the violence.

A few days later, the defendants learn that Hampton was killed during a police raid. Seale continues to antagonize the Judge with his constant requests for his attorney or to represent himself in the proceedings. Seale argues that Judge Hoffman is violating his constitutional rights. Judge Hoffman orders the marshals to take Seale to another room and subdue him. Outside the presence of the jury, Seale is beaten, chained, and gagged before being returned to the courtroom. The audience, jury, and the other defendants gasp upon his return. Seale’s treatment by the Judge causes Schultz to request that Seale be severed from the other defendants and granted a mistrial. Judge Hoffman initially resists, but ultimately grants the request. The crowd and Seale’s fellow defendants cheer the Judge’s order.

As the trial proceeds, Kunstler learns that the former U.S. Attorney General Ramsey Clark (Michael Keaton) conducted an investigation into the riots during the Lyndon Johnson administration. Kunstler and Weinglass go to interview Clark at his home and to see if he has any relevant testimony. When they arrive, two United States attorneys are present already. Clark informs the defense attorneys that the U.S. attorneys are there to inform him that he cannot testify in the criminal case. Despite this, Clark agrees to testify for the defense. However, the Judge does not allow Clark to testify in front of jury due to the State’s objections. Kunstler is allowed to voir dire Clark to see what he would testify to. Clark testifies that he declined to initiate prosecutions after the riots because the evidence overwhelming showed that the Chicago Police Department instigated them. The Judge rules that the testimony will not be presented to the jury and precludes Clark from testifying. In his frustration, the passive Dellinger openly expresses his frustrations about not receiving a fair trial to the Judge and punches a bailiff in the face, resulting in his arrest.

A short time later, Kunstler is provided with a tape from the State that includes Hayden inciting the crowd. Hayden wants to testify in his own defense, so Kunstler does a mock cross examination on him, which includes playing the tape. Flashing back to the night of the riot, Davis tries to calmly talk to police officers who are trying to arrest a minor who was climbing a flagpole. One of the officers clubs Davis in the back of the head, splitting his head open. Hayden is angered at the assault on his friend and gets on the microphone and states “If blood is going to flow, then let it flow all over the city!” The protesters begin to openly fight the police. The defendants try to escape the violence but find themselves cornered by police in front of a restaurant. The police remove their badges and proceed to assault the defendants who give little resistance. Returning to the mock cross-examination, Abbie deduces that Hayden misspoke at the rally. He concludes that Hayden meant to say “If our blood is going to flow…” Hayden asks Abbie to testify for the group.

In his testimony, Abbie reinforces that Hayden’s statement was misconstrued. Abbie testifies that he loves his country but believes that some evil people are running it currently. Abbie jokingly wonders why he would be on trial for his thoughts when cross examined by Schultz. The trial comes to an end. No one is convicted of the conspiracy, but the defendants are convicted of the inciting a riot charges. In addition, everyone, including the defense attorneys, are convicted of contempt of court. At the sentencing, Hayden is chosen to speak for the group. The Judge instructs him that if he speaks briefly, respectfully, and appropriately, then he may consider that when sentencing them. Hayden chooses to read the names of the 4,752 soldiers who were killed in the Vietnam War since the trial began. The act prompts many in the courtroom to stand and cheer. Schultz stands as the names of the fallen are read. The Judge struggles to regain control of the courtroom but cannot. The Judge hands down the maximum sentences for all the defendants.

In the epilogue, the audience is informed that all the convictions were overturned on appeal, including the contempt findings. The case was sent back for a new trial, but the Federal Government dismissed the cases against the defendants rather than proceed with a new trial. Hayden successfully became a politician, and Judge Hoffman received less than favorable judicial reviews the remainder of his career.