Truman doesn’t realize that his quaint hometown is a giant studio set run by a visionary producer/director/creator, and that the folks living and working there are Hollywood actors. Even his incessantly bubbly wife is a contract player. Gradually, Truman gets wise, and does something about his discovery. 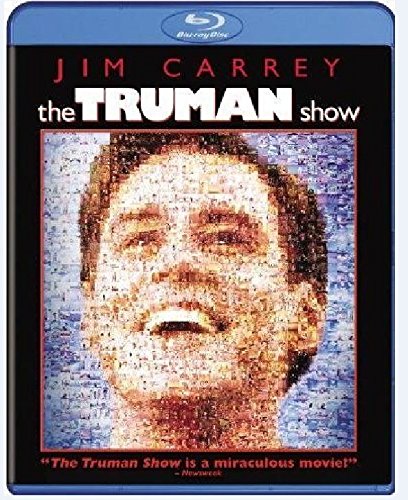 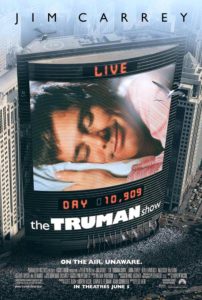 Welcome to The Truman Show! Truman Burbank is the most famous face on television, except he doesn’t know it. He is the unaware star of a 24/7 reality show where everything and everyone he knows is a paid actor, prop, or paid advertisement with every moment of his life broadcast worldwide for a rabid viewing audience to watch his every move!

Truman is married to his all-American high school sweetheart, Meryl, and he late-night golfs and drinks beer with his from-childhood BFF, Marlon in a “Leave It To Beaver” carefree environment. Surrounding Truman in the idyllic small town of Seahaven is a literal army of extra actors that make sure Truman’s life is front and center within a huge man-made dome with over 5,000 hidden cameras.

The entire operation is overseen by the egomaniacal god-like creator and producer, Christof. But all is not so perfect in Truman’s life when he starts realizing strange phenomena that makes him question if he’s somehow being watched. Stage lights fall randomly from the sky, rainstorms that drench only him, his deathly fear of water that surrounds the entire island preventing him from ever leaving…

Everyone he turns to assures him he’s being paranoid, even though people whom he has never met know everything about him. But as Truman starts to understand that strange and powerful things are determined to keep him in Seahaven forever, he plots a way to escape to find his one true love and to see what’s outside Seahaven. However, it may take a miracle as everyone in town, and even the weather itself seem willing to stop at nothing to keep Truman a prisoner in his own television show!