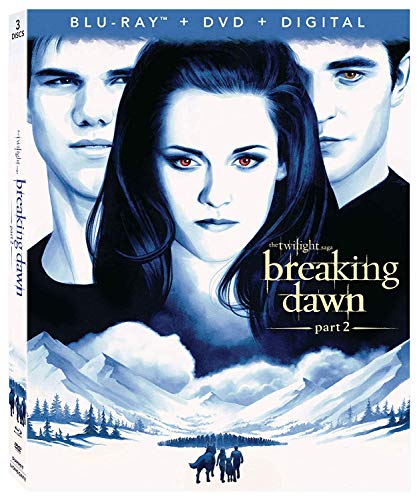 Summit Entertainment has officially announced that it will release The Twilight Saga: Breaking Dawn – Part 2 onto Blu-ray.   The film was directed by Bill Condon and is based on the novel written by Stephenie Meyer.  The films stars Kristen Stewart, Robert Pattinson, Taylor Lautner, Peter Facinelli, and Ashley Greene.  The Blu-ray release will feature hours of extensive bonus materials, and will be available for purchase on March 2, 2013.

Picking up where Part 1 left off, Breaking Dawn – Part 2 starts after the birth of Renesmee, the daughter of Bella (Stewart) and Edward (Pattinson).  The Cullens gather other vampire clans in order to protect the child from a false allegation that puts the family in front of the Volturi.  Meanwhile, the child brings conflict between Bella and her lifelong friend, Jacob (Lautner), and an all-out war between the Cullens and the Volturi.

Breaking Dawn – Part 2 was released in November 2012 and has grossed an incredible $290 million in domestic box office to date.  The Twilight Saga will become the top-selling home entertainment franchise since 2009, having already sold over 50 million DVD and Blu-ray copies to date.  Driven by an unbelievably enthusiastic and loyal fan base, Stephenie Meyer’s Twilight series has sold over 116 million copies worldwide while the global box office for the complete film series stands at over $3.3 billion, with Part 2 achieving the highest grosses of all with $821.8 million.

The Blu-ray will include several special features, including: “Forever: Filming Breaking Dawn Part 2” – Seven-part “making of” documentary; “Two Movies at Once” featurette; “The Forgotten” Green Day music video; “Jump to” features; and an audio commentary with director Condon.

Disclaimer: Affiliate links are contained in this post. This means when you click a link, and purchase an item, Movie House Memories will receive an affiliate commission. Advertisers and Affiliate Partnerships do not influence our content. See our Terms of Use about the inclusion of affiliate links on this site for more information.
January 16, 2013
1 minute read
Show More
Back to top button
Close
Close