The Unbelievable Truth takes place in a small community on Long Island. Josh is back from prison from crimes most in town cannot remember. When he takes a job at Vic’s auto repair shop, his daughter, Audry, falls head-over-heels in love with him. However, Josh rejects her because he’s neither ready for such a relationship, but alos fears Vic’s disapproval. Out of spite, Audry decides not to go to Harvard, and instead moves to New York to be a photographic model. She quickly transitions from modelling in lingerie to full nude portraits.

Of course, Audry’s family disapproves, and they send Josh out to bring her home. He gives up when he finds her living with her agent. On his return home, Josh comes across the daughter of the man he illegally killed in a scuffle. She says that she can testify that he’s innocent. Moreover, Audry is thrilled that Josh has returned to her. She gives all her money she earned posing naked to her father. Once again, she offers herself to Josh when she invites him to see the world with her. This time he requites her love. Unbelievable, isn’t it? 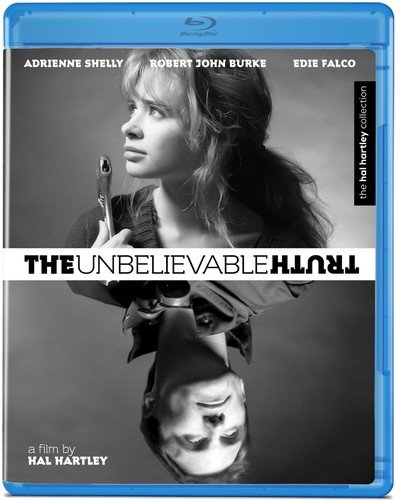 The summary below contains spoilers.
In The Unbelievable Truth, Josh doesn’t drive or drink. He’s a mechanic dressed as a priest coming back to his home town after prison time.

Teen Audrey, wakes up to the meandering of her parents on at her for missing school, not getting the kind of education to be accepted into college. Josh gets a job at the local auto shop which is actually operated by Audrey’s gestating cranky highly strung father.

Audrey takes a shine to Josh after he comes into the book store looking for George Washington literature where she sits and reads instead of actually working. Audrey believes the end of the world is looming not minding telling people who’ll listen.

The past catches up with Josh due to the town believing he’s a murderer after an incident some years back, the reason he went into jail in the first place.

Pearl, Audrey’s friend and associated reason Josh is frowned upon fears to tread around him but somehow it seems she is concealing something that needs to be told. The truth.
Josh is a no show to her Dad, his new boss’s birthday party and Audrey is accosted by multiple leeches for a one night stand so she grabs Pearl, leaving fast.

Reaching out to her Mum, Audrey asks about Josh’s history if he was actually responsible for the tragic circumstances for which the whole small town community believes he was.
Meanwhile Josh is talking opening to new friend Mike, co-mechanic and amateur guitarist.

Making top dollar modelling, Audrey is looked down upon even more by her Father, he goes further out of control after walking in just at the moment Audrey is kissing Josh.

She leaves town to model in New York City, but not before propositioning Josh on the step of his childhood home that he is fixing up, however immediately after seductively placing a band-aid on her scratched knee, he basically tells Audrey to bail. She does and extends her leave over to Europe.

A month or two later getting huge dollars for photography, Audrey’s mum tops off Josh that she may be returning to the city.

Love is never straightforward, the visit goes awry, but Josh’s history in unveiled as bogus and he did something that only Pearl knew which she has only just brought out to light.

Running back into town to find him, Audrey invites Josh to see the world, with her, love conquers all, my heart skipped a beat when Josh admits he doesn’t trust anybody, but we know he certainly will trust Audrey.

Suddenly a disrupting noise can be heard from above, they look up (is it the end of the world) fade to black.