In The Whole Nine Yards, Oz is a Montréal dentist in a loveless marriage with a woman named Sophie. She might hate him more as she wants Oz dead so she can collect on his life insurance policy. When the two learn that their new neighbor is a hit man named Jimmy “the Tulip” Tudeski, with a price on his head, Sophie sends Oz to Chicago to earn a finder’s fee. To get his wife off his back, Oz agrees to go. Meanwhile, his perky dental assistant, Jill, urges him to get laid while there, but in reality, Sophie hired her to kill Oz.

In Chicago, one of Yanni’s men, Frankie Figs, waits for Oz in his hotel room. Oz has second thoughts on telling Yanni what he knows, but there’s no turning back now. Meanwhile, Oz’s wife rats Oz out to Jimmy in hopes Jimmy too will kill Oz. When Oz meets Jimmy’s wife, he falls head over heals in love with her, and that complicates matters more. Soon, everyone heads back to Montréal to settle some scores. 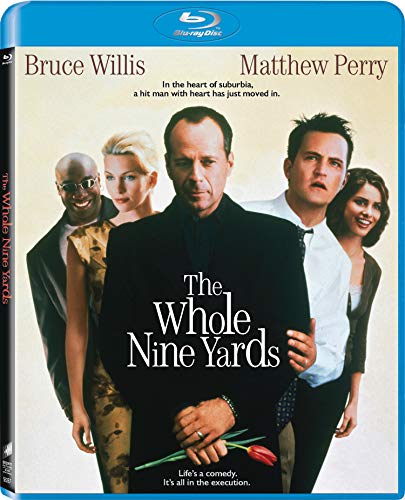 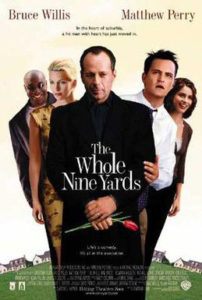 In the city of Quebec, lives dentist Nicholas “Oz” Oseransky (Matthew Perry). He’s a miserable man trapped in a loveless marriage to a woman named Sophie (Rosanna Arquette); the daughter of his deceased ex-partner. Unfortunately for Oz, he can’t divorce her because her father embezzled from the dental practice, leaving Oz owing a lot of money

On his way to work, Oz finds Sophie and her mother having breakfast. She needs $5000, but won’t tell him what for. Frustrated, he heads to work. Once there, we meet his assistant, Jill (Amanda Peet). At lunch, Jill tells Oz that his wife is a terrible person, and he jokes about having her killed. Jill tells him to name his price.

Later that day when Oz returns home, he finds a new man moving in next door. Always neighborly, Oz goes to say hi to the man but quickly realizes from the tulip tattoo on the man’s forearm that his new neighbor is actually the dangerous Jimmy “the Tulip” Tudeski (Bruce Willis); a contract killer from his native city of Chicago. Jimmy’s in hiding for ratting out Lazlo Gogolak and other members of the Gogolak gang. Oz runs home in a panic to tell Sophie they’re moving.

However, Sophie hates Oz, and she insists Oz fly to Chicago to collect a finder’s fee for giving up Jimmy’s whereabouts to Lazlo’s son, Janni (Kevin Pollak). Once he leaves, she runs to Jimmy to tell him what her crazy husband has done.

In Chicago, Oz has lunch with an old friend and tells him that he has no intention of meeting with Janni. He’s just doing it to humor his wife. However, when Oz returns to his hotel room, he finds Janni’s enforcer, Frankie Figs (Michael Clarke Duncan), waiting for him. Frankie roughs Oz up to get the truth out of him before meeting Janni. At Janni’s, Oz meets Jimmy’s estranged wife, Cynthia (Natasha Henstridge) and he’s smitten. Janni orders Frankie to take Oz back to Canada and keep an eye on Jimmy until he and his boys arrive to kill him.

Back at the hotel, Cynthia pays Oz a visit to find out if he really knows Jimmy’s whereabouts. She tells him both Janni and Jimmy both want her dead as much as they want each other dead in order to collect on $10 million dollars held in a trust in their names. Using puke breath and scotch, Oz “seduces” Cynthia and the two have a night of passionate sex. From then on, Oz vows to protect Cynthia from Jimmy.

Frankie takes Oz back to Quebec, and when they get to their hotel room, Jimmy’s waiting for them. Turns out, Frankie and Jimmy are old friends and have a plan of their own to kill Janni, his men, and Cynthia when they come to town.

When Oz returns to work, he tells Jill about what transpired in Chicago, and that he got laid. That excites Jill, but she becomes extremely excited when she finds out Jimmy the Tulip is Oz’s neighbor. She demands Oz take her to meet him.

Once there, Jill tells Jimmy that not only is he her hero, but he’s the reason she wants to be a contract killer. That $5000 from the beginning of the movie Sophie needed, was to pay Jill kill Oz. Luckily for him, Jill ended up liking Oz and refused the contract. (Big mistake in killer class.) Jimmy and Jill discuss Janni’s arrival, but it makes Oz angry. He won’t stand by and let them kill Cynthia.

All this time, Sophie has been looking for a new hitman, and has found one (Harland Williams). She’s convinced him to do the job for $5000 and a trip to pound town. Oz returns home to warn Cynthia back in Chicago, but Janni has already left town with her to track down Jimmy. When they arrive at Oz’s house, he’s able to warn Cynthia. However, she has a warning of her own; Janni will kill him after killing Jimmy. The two watch from Oz’s garage as Janni’s gang walks into Jimmy’s trap.

Down the street, Sophie and her hitman make final plans in his car. She goes over the payment to him and promises her mother will pay the remaining fee once Oz is dead. However, the hitman is undercover special agent, Steve Hanson. He immediately recognizes Janni Gogolak heading toward Jimmy’s house. Sophie tells him whose house it is, and he figures what’s about to go down. He pulls out his gun and leaves the car while Sophie sits confused.

When Janni enters the house, Jill, buck naked, distracts him. Jimmy and Frankie easily kill Janni and his men. Outside, Oz’s car peels out and as Oz and Cynthia make a break for it. The ruckus catches Jimmy’s attention, and when he looks out the window, he spots Hanson snooping around. He has Jill distract Hanson before killing him. When Sophie sees this, she runs off, screaming. Once Jimmy gets the body inside, he learns Hanson is/was an undercover cop.

While disposing of the bodies, Oz calls. During this call, Jill learns Cynthia was the woman Oz slept with in Chicago. While she’s really excited for him, this pisses off Jimmy. However, Oz has a plan that will benefit everyone. He’ll alter the cop’s teeth to exactly match Jimmy’s. Then they can take his body along with Janni’s, put them in Oz’s car, and set it on fire. With the remains charred beyond recognition, only dental records could id the bodies.

The plan works. The investigators believe Janni and Jimmy are both dead which allows Cynthia to collect the $10 million. In exchange for her and Oz’s lives, Cynthia agrees to transfer all the money to Jimmy. Meanwhile, the investigators have found Agent Hanson’s undercover cop car. Inside the car is a tape recorder. The tape has more than enough information to put Sophie and her mother in prison for attempted murder… and all Oz needs to successfully divorce her once and for all.

The next day, Cynthia and Jill go to the bank to transfer the money while Oz and Jimmy head to an art museum where they will be around people (Oz thinks he’ll be safe that way). Jimmy has other plans though. He takes Oz and Frankie Figs to a private yacht instead.

At the bank, Jill asks Cynthia if she’s tempted to take the money and run. Cynthia says no because she loves Oz and can’t leave him knowing Jimmy will kill him. This excites Jill, and she tells Cynthia that Jimmy wants her and Oz to have $1 million as a wedding gift. She then has the banker make two transfers.

Back on the boat, Jimmy gets the call that the money is now his. He pulls out a gun and points it at Oz. As Frankie looks on, Jimmy turns the gun on Frankie and shoots him instead. Oz tells Jimmy that it’s obvious he’s in love with her, but Jimmy’s confused because he thinks Oz is referring to Cynthia. However, when Jill arrives, she jumps into Jimmy’s arms. That’s the “her” Oz was referring to.

Oz leaves to meet Cynthia and when he arrives, he asks her to marry him. She’s disappointed because she thinks Jimmy told him about the money, and that’s his only reason for asking. Since Oz doesn’t know what she’s talking about, she happily agrees to marry him.

The film ends with the newlyweds at Niagara falls as the credits roll.