The World According To Garp chronicles the life of T. S. Garp; a sweet-natured writer whose life is a weird minefield of violence, adultery, fatherhood, rampant feminism, and eerie coincidence. Although he sees himself as a “serious” writer, when his mother Jenny Fields writes a feminist manifesto at an opportune time, she finds herself as a magnet for all manner of distressed women like the transsexual ex-NFL receiver Roberta Muldoon. 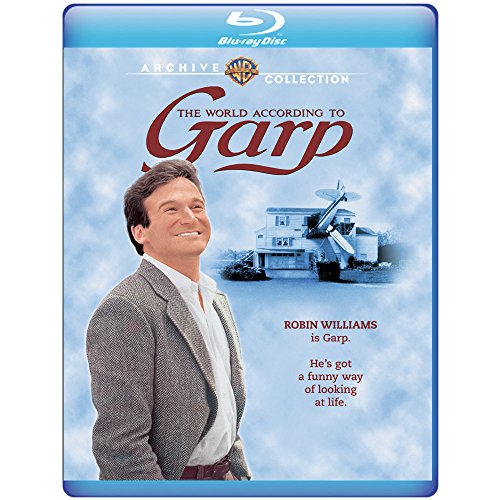 The World According to Garp [Blu-ray]

‘The World According to Garp’ Movie Summary 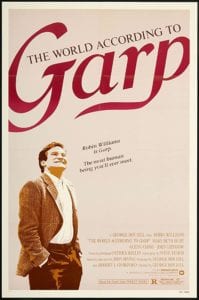 The World According to Garp begins with a young nurse, Jenny Fields, introducing her parents to her new born son, T. S. Garp. Jenny calmly, yet very graphically, describes how she had herself impregnated by a dying soldier while serving as a nurse during World War II.

Jenny, who always wanted a child without the burden of dealing with its father, details how the soldier, a technical sergeant who could only say his last name, Garp, had a constant erection due to priapism. Shortly before his death, Jenny decided to remove her undies, mount the brain dead ball turret gunner, and use his sperm complete her mission. It must have been a direct hit, or else this movie never would have happened.

Jenny begins working at an all-boys prep school. She has her hands full raising Garp, who is forever curious about the fighter pilot father he’ll never know. Garp pursues amateur wrestling because he sees wrestlers wear head gear similar to a pilot’s helmet. Garp, when not trying to be his father, spends time playing with two sisters, Cushie and Pooh Percy. Cushie, the slut of the duo, teaches Garp about “lust,” while, Pooh, who could be described as pure evil, teaches Garp what it’s like to be viciously attacked by their family dog.

As a teen, Garp dedicates himself to becoming a famous writer. He meets and becomes immediately smitten with Helen Holm, the daughter of his wrestling coach. Helen tells Garp that she doesn’t like wrestlers or writers but would marry someone who is good at both.

Amazed by New York’s eccentricities, Jenny has coffee with a hooker to talk about “lust.” Ms. Fields wants to know if the hooker gets any physical or emotional enjoyment from her job. Jenny is shocked to learn that prostitution is actually illegal, believing women should be able to do whatever she want with her bodies. Then, like all loving, mothers, Jenny pays for Garp to have sex with the hooker.

This incident inspires Jenny, who begins to write a novel called A Sexual Suspect. At the same time, Garp continues penning his first own novel. Helen falls in love with the story and decides to marry Garp, who is now a real writer.

A Sexual Suspect becomes a nationwide bestseller and feminist manifesto, making Jenny the figurehead of the feminist movement. So much so, a man attempts to assassinate her at a book signing. All of the attention Jenny gets not only worries Garp, but infuriates him, because his first novel is critically acclaimed, but a slow seller, while Jenny’s book has taken over the world.

Garp, Hellen and their son, Duncan, take a holiday to Jenny’s house. While there, Garp discovers Jenny has opened her home to women needing a safe haven from physical and emotional abuse. When Garp tries to speak with one of the women, he quickly learns she has no tongue and “speaks” via a small pad of paper. Garp then meets a transsexual woman by the name of Roberta Muldoon. She opens up to Garp, informing him that she is the former tight end for the Philadelphia Eagles. Roberta informs Garp the women with no tongues are part of The Ellen James Society.

This sorority voluntarily removed their own tongues as a sign of support for an 11 year old girl who was brutally raped by two men. These men cut out Ellen James’ tongue so she would not be able to report on them. As an adult, living incognito, Ellen James asked the society to disband; preventing other women from mutilating themselves, but the society refused to listen. Garp, never understanding why these women would intentionally harm themselves, was adamantly against it and having his mother involved with them.

After Garp and Helen have their second son, Walt, Helen begins teaching graduate school classes. She is tempted by the advances of a young student named Michael Milton. Believing Garp had an affair of his own, which he did, she decides to pursue an affair Michael. Michael’s scorned girlfriend Marge delivers a letter to Garp, exposing Helen and Michael’s affair. Garp, mad as hell, takes their sons and leaves the house. Helen comes home to find an empty house and Marge’s letter sitting on the kitchen table. Garp calls Helen, telling her that she has to break it off with Michael immediately and no “one last fucks for the road.”

While Helen is going down on Mike, Garp and the boys “fly” into the driveway at full speed in Garp’s car. To make a bad situation horrifying, the car crashes into Mike’s car. Michael has his tallywacker chomped off by Helen. Garp breaks his jaw and lacerates his tongue. Duncan loses an eye. And Walt, tragically, dies in the crash.

Garp, Helen and Duncan physically and emotional rehabilitate at Jenny’s house. Garp and Helen reconcile, have a baby girl. Rejuvenated by the love for his family, Garp starts writing a controversial book about Ellen James and the Society. This book, ELLEN, explains how the Society goes against Ellen James’ wishes, continuing to mutilate themselves.

Jenny and Roberta attend a political rally, where Jenny is the keynote speaker. As Jenny introduces herself, Roberta spots a sniper hiding nearby. She isn’t fast enough to prevent the gunman from shooting Jenny, taking her life.

Now a prep school wrestling coach, Garp has gotten his life back to normal. One day during practice, a woman dressed as a nurse walks into the wrestling room and shoots Garp three times in the chest. This woman turns out to be the bane of Garp’s existence, Pooh. Our last images are of Garp flying through the air to an area hospital. Flying just like the father he never knew.