Packard Walsh and his bumbling gang terrorize an Arizona town; forcing drivers to drag-race as part of their ‘racing for pink slips’ money-making scheme. However, things get out of control for the boys when they kill Jamie Hankins for having sex with the only woman Packard obsesses over. Soon after, a mysterious young man named Jake Kesey arrives as does a souped-up Dodge with an unknown driver. As Jake befriends Keri Johnson (the young girl Packard would kill for), Packard’s gang begins to lose their lives one by one racing the unknown driver, and Sheriff Loomis is hot on everyone’s tail. 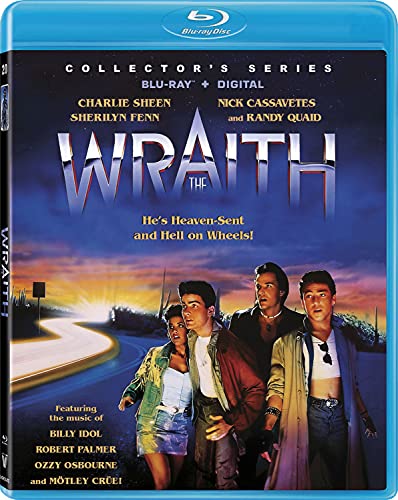 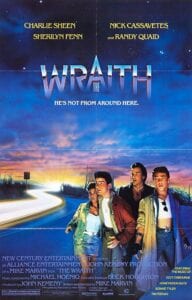 The Wraith begins with four brightly-colored spheres descending into the night sky. They collide at a crossroads in the Middle of Nowhere, Arizona. From it, we see a helmeted figure emerge before driving off in an all black Dodge M4S Turbo Interceptor.

We next head to the small town of Brooks, Arizona. There, Packard Walsh (Nick Cassavetes) leads a gang of car thieves that coerces people into racing them for their their car’s pink slips. Packard rules the town through intimidation, and even views some people as his own property like the beautiful Keri Johnson (Sherilyn Fenn). This obsession led to someone recently murdering her boyfriend, James “Jamie” Hankins without a trace. Although Keri was with him at the time of his death, she doesn’t have any recollection of the incident after her hospitalization.

Coincidentally at the same time, Packard begins to lose all control of his illegal race scheme when that Turbo Interceptor appears out of the blue. Black body armor, complete with a black race helmet, covers the car’s mysterious driver. Looking closer, metal braces, similar to what victims with severe physical trauma would wear, also adorn that armor.

This unknown driver challenges Packard’s gang to race. The result is the explosive deaths of gang members, Oggie Fisher (Griffin O’Neal) and Minty (Chris Nash), from the high-speed accidents while they raced the unknown driver. However, these fiery crashes unexpectedly leave the victim’s bodies untouched except for their burnt-out eye sockets. Sheriff Loomis (Randy Quaid) and his lawmen take chase of the Turbo Interceptor, but it quickly vanishes into a cloud of brilliant light.

Later, two more gang members, Skank (David Sherrill) and Gutterboy (Jamie Bozian), fall victim to this so-called Wraith after he drives full speed into Packard Walsh’s isolated garage; resulting in a huge explosion. It blows them all to bits and pieces. That leaves Packard and Rughead (Clint Howard), the gang’s tech-man, and the only one who didn’t participate in Jamie’s murder, alive. Rughead theorizes why this mysterious driver has targeted for death except for himself. Once Sheriff Loomis arrives at still burning garage, Rughead rambles to the Sheriff his theory.

Meanwhile, that possessive Packard is out stalking Keri, and after he spots her kissing Jake, he kidnaps her from Big Kay’s while she works. He gives Billy a beatdown on his way out when he tries to stop him. After Packard tells her they are going to California, Keri says she will never love him. Pissed at this revelation, Packard gets out of his car and pulls a knife.

The Turbo Interceptor slides up next to him, and challenges Packard to a race. He agrees, and after a quick chase, Packard dies in a fiery explosion just like the rest of his gang. Sheriff Loomis arrives to the aftermath, and calls off the hunt for the driver of the car because he thinks roadblocks won’t stop something that can’t be stopped.

Later that night, when Keri arrives home, the Turbo pulls up. The driver gets out, and he transforms back into Jake. It’s then that Keri realizes Jake is actually a version of her dead boyfriend, Jamie. He says that this form is as close as he could come to what he once was. He then asks her to wait so he can do one last thing.

Jake drives the Turbo to Big Kay’s, and hands Billy the keys. When he tells Billy that his work is finished. Billy replies, “Who are you, bro?” Jake answers, “You said it, Billy.” As Jake rides off on his dirt bike, Billy yells, “Jake,” before realizing who he really is, and exclaims, “Jamie!”

Jake picks up Keri while Sheriff Loomis watches from a distance. The two lovebirds ride off into the desert night for a happy ending.