Johnny Yune is a Los Angeles cook everyone refers to as “Bruce” due to his uncanny resemblance to a certain martial arts legend. When “Bruce” unwittingly becomes a cocaine smuggler for the mob, he finds himself on a zany cross-country trek as he tries to move his stash of “Chinese flour” to New York City. 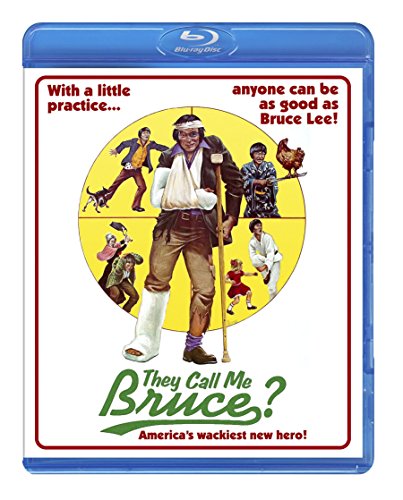 They Call Me Bruce? [Blu-ray]

‘They Call Me Bruce?’ Movie Summary 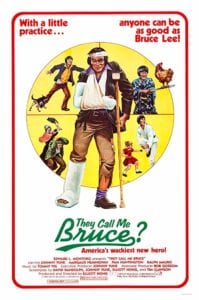 They Call Me Bruce? begins with little boy running through the hills outside his rural village, and down a winding dirt road to inform his dying grandfather that he can’t find a doctor to help him. The boy asks his grandfather who will take care of him once he dies.

His grandfather tries to put his grandson’s mind at ease, and tells him to go to America. When he was a young merchant marine himself, he met one of the most beautiful ladies there. He says if the boy finds her, that she will take very good care of him. As the little boy asks him how to find this lovely lady, he gives him a scroll with directions to find her. He asks the boy to tell the lady her he loved her before dying.

Much time passes, and the little boy is now a grown man living in Los Angeles. He works as a chef serving dog meat to gangsters with a side of badly-dubbed Italian singing. They call him Bruce because they think he looks like martial arts legend, Bruce Lee.

While eating at Spumoni Ristorante Italiano, a fight breaks out, and the FBI arrests the mobsters for selling cocaine. The mob bosses then meet with Lil Pete to discuss how to keep both the Feds off their back and the Boss of Bosses happy. The Boss of Bosses calls to tell them how they have embarrassed him, and he threatens to make their families widows and orphans if they screw up one more time.

We cut to your humble cook, Bruce, loudly making spaghetti for Lil Pete. While Bruce tries to stay out of trouble, trouble seems to find him. While out on a delivery, Bruce comes across a purse thief in action, and he jumps in to stop it. He tells the little old lady to give the nice black man his purse back.

The man then threatens Bruce, but he replies that with his right foot, he can knock the guy’s knife out of his hand. With his left, he can kick his nose. With one hand, he can poke out his eyes, and with his other, he can break his neck. He then invites the punk to take a good look at his face. He’s an oriental! The thief backs down.

Bruce delivers some noodles to Porky at a pool hall, and meets Anita there. He asks her if she’s from New York because she’s beautiful, and he’s looking for a beautiful lady from New York. Three pool hustlers try to fight Bruce, and he sneaks out the lady’s restroom through a window to avoid them beating him up.

He returns home where he dreams of beating up those men just like Bruce Lee could while Anita and Porky cheer him on. We cut back to reality, and Bruce has broken everything in his apartment during this daydream. He vows to be just like Bruce Lee…and Rocky. Rocky’s strong. He grabs raw eggs, puts them in a glass, and then tries to drink them. However, that shit is nasty. He cooks the eggs in a wok instead.

He then heads over to a kung fu dojo to be a student. The teacher starts him with a white belt, and tries to teach him, but Bruce flunks out first lesson. His teacher picks up a sword, and tries to kill him before kicking him out. That night, a sad Bruce goes to a corner market, and interrupts a stick up. He knocks the robber out (and himself) with nunchucks. Bruce ends up a hero.

The next morning, Lil Pete reads about it all in the local newspaper. Thinking Bruce is a kung fu master (or not), Pete calls up the Boss of Bosses to tell him Bruce will be his new delivery boy to move all their cocaine for him.

Bruce heads to work in the morning, and some local bullies try to fight Bruce because they know he doesn’t know kung fu. Bruce remembers his grandfather telling him to use his brain instead of his fists, which he does. He talks his way out of it.

The cops then harass Bruce for carrying nunchucks while he waits for his food at a roach coach, but he claims that the nunchucks are chopsticks. The cops give him a pass when he actually uses them as chopsticks.

Lil Pete recruits Freddy, one of the drug lord’s stooges, to be Bruce’s limo driver while Big Al spies on them. Big Al goes to Karmen, and tells her that he know’s Lil Pete’s plan, and if he screws up one more time, the Boss of Bosses will take him out. He wants Karmen to switch the cocaine for flour any chance she can on his way to New York. When the Boss of Bosses takes out Lil Pete for incompetence, he and Karmen can control the west coast.

As Bruce walks down Huston Street, Anita drives up behind him, and asks to be his girlfriend. She gives him a necklace to wear to remember her, and then gives him a kiss. She says as long as he wears the necklace, she will not make love to another man. Bruce says he won’t either. Really Anita is a FBI agent looking to bust Lil Pete, and the necklace has a microphone in it.

First stop, Las Vegas. Karmen and Anita both tail him there. The Jewish boss of Vegas, Deli Lama, orders his men to take Bruce out for delivering drugs in his territory, and to bring the coke to him. Bruce makes his first delivery anyway, and then learns how to play blackjack.

Freddy then picks up a prostitute, while Bruce plays penny slots. Karmen introduces herself to him, and he wins the jackpot on the machine. As he tries to pickup his winnings, Deli Lama’s men show up. Karmen goes back with Bruce to his room where Lama’s men attack him. Karmen takes them out.

Back on the road, the cops pull the two over. Bruce gives the cop some Chinese flour to taste while Freddy tries to keep cool. The cop won’t eat it because he hates Chinese food; a half hour later, you’re hungry again.

Bruce gives the cops a bag of money. Thinking Bruce is trying to bribe them, the cops arrest them, but Anita arrives in a van. She distracts them long enough for her FBI agents to knock out the cops, and for Freddie to drive him and Bruce away. A few miles down the road, the car’s engine overheats, and Freddy tries to fix it. Bruce flags down a cowboy who shoots the handcuff off his arm, and then rides away.

After a successful delivery in Texas, the boys go to a cowboy bar called Spurs. Bruce and Freddy stick out like a sore thumb. Bruce takes a shot of Saki Natural, and starts a barroom brawl with a cowboy over a girl named Suzie.

Once again, Anita shows up; this time dressed as a ninja, to bail him out. Karmen shows up too, and tries to steal Bruce’s flour, but Anitas knocks her out. Bruce backhands a cowgirl as the cops show up, and arrest everyone.

At the jailhouse, the guard serves the prisoners crappy food, and they bitch about it. Bruce offers to cook them some noodles using his Chinese flour in the jail’s kitchen. Freddy tries to stop him, and a bag of it rips open. A fan conveniently placed right next to them blows it all over the jail cells; fucking everyone up! The guard sets everyone free, and he, Bruce, Freddy and two cowboys run off to catch some real criminals. They swerve down the road in the cop’s car with siren blasting.

Eventually, Bruce and Freddy make it to Chicago; the last delivery before New York. The Polish boss there, Leo De Lyon, hires his own Polish killer to take the boys out. Bruce arrives to the Japanese home of the local mobster to give him the flour. His geisha girls give Bruce a warm welcome. The Polish assassin shows up, and takes out the mob bosses men while Bruce and everyone eats. As he’s about to shoot Bruce from behind, Bruce accidentally stabs him with a samurai sword, and kills him.

After dinner, Bruce gets a massage from a geisha girl as Karmen shows up again. She knocks out the geisha girl, and continues his massage, and then knocks Bruce out with a properly placed acupuncture needle. She then swaps out the last bag of cocaine with real flour.

The Boss of Bosses goes to shoot Bruce, but Freddy stops him. There is a struggle, and Bruce and Freddy run off. Everyone chases after them through the streets of New York. Bruce flees to a Hairotorium where the woman working there tries to hide Bruce, but the mobsters search her place at gunpoint anyway.

Bruce runs out of the store, and into a black church in the middle of a service. The reverend has Bruce tell the congregation his story. He recounts that his grandfather said that “broads” were the most important thing in life. The reverend doesn’t like that kind of language being used towards women, and he kicks Bruce out.

Bruce finds a friendly gang of brothers chasing after Freddy. They speak jive back and forth, and the brothers agree to protect Bruce and Freddy. They take them to the Majestic Hotel in Brooklyn, maybe Harlem. There’s a knock on the door, and Anita is standing in the doorway. She reveals she’s a Federal Agent, and she tells Bruce that Lil Pete and Freddy used him as a stooge to deliver drugs cross country. She asks Bruce to help her catch the gangsters. He quickly agrees.

The next day, Freddy and Bruce return to the Boss of Bosses to give him his cocaine. As Bruce goes to give him the cocaine, the Federal agents jump out to arrest everyone, but the Boss of Bosses escapes. Bruce chases after him, and follows him to a closet. Once he comes out of the closet, the cops put him in cuffs, and toss him into a cop car. They arrest Freddy too, and before they drive him to jail, Bruce gives him the necklace as a token of remembrance.

Later, Anita and Bruce use his grandfathers scroll to track down the lady he loved so much; the one that would take care of Bruce for the rest of his life. The directions lead to the Statue of Liberty—the most beautiful lady in the world. As Anita and Bruce walk away, Lady Liberty calls out to him below, and says to to him with a wink, “Bruce, don’t forget the most important thing in life.”