Things to Come begins at Christmastime, 1940 in Everytown. While the people enjoy the holiday season, war comes to them—shattering the peace. Many see war as a necessary evil, however, John Cabal knows there’s always a steep price to pay for war.

The war wages on for decades, and by the time the 1960s arrive, a disease called the Walking Sickness has killed half the world’s population. By the 1970’s, the disease is gone, and society tries again to rebuild itself. Eventually John Cabal returns to Everytown with hope for the future, but by 2036, there are still those who are willing to die to stop peace and progress. 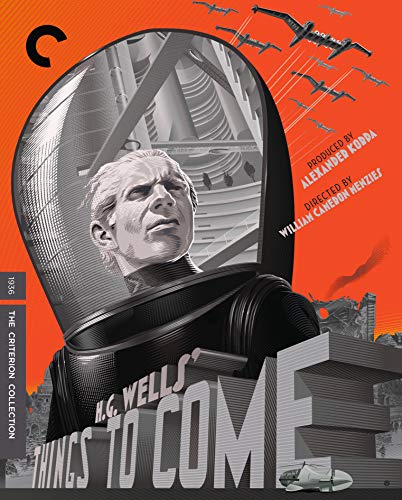 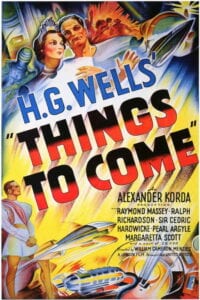 Things to Come begins in the city of Everytown in southern England. There, the businessman, John Cabal, finds himself unable to enjoy Christmas Day, 1940 as the newspapers report war could break out at any moment.

With him is a guest of his, Dr Edward Harding. He too shares Cabal’s fears while a more optimistic one named Pippa Passworthy believes war most likely will not happen. On the slight chance it does, he feels that with the day’s technological achievements, the war will be brief. However, that night, their city finds itself under a surprise an aerial bombing. This results in Britain’s mobilization to begin a global war.

Months pass, and Cabal finds himself a Royal Air Force airman. As he pilots a Hawker Fury, he shoots down an enemy aircraft dropping gas on the British countryside. He lands so he can pull out the badly injured enemy pilot from its wreckage.

The two chat about the madness of war as they whip out their gas masks from the poison gas drifting in their direction. They turn to spot a young girl running towards them, and the wounded pilot insists she take his mask.

As Cabal takes the girl to his airplane, he pauses, and returns to the dying pilot to give him his revolver. The pilot comments on the irony that he most likely gassed that child’s family, and then sacrificed his own life in order to save hers. A gun shot then pierces the air.

Years pass, and it’s now been so long that the world has forgotten why they are fighting. With all the destruction around, the planet has fallen into another Dark Age. Every city in the world is now in ruins, and hyperinflation has destroyed all economies. Any technological advancements over the years are used only for weapons of war.

By the time 1966 hits, the enemy’s armies and navies are no more. However, they still have an adequate air force that drops a nasty biological weapon called the Walking Sickness with hopes that it will finally give them total victory. Dr. Harding and his daughter do their best to find a cure, but with little equipment available, it all seems hopeless. This results in a plague which kills off half of humanity, and snuffs out the last remaining governments.

Next we come to the year 1970. A warlord named Rudolf (a.k.a. The Boss) is Everytown’s chieftain. His method to rid the town of the plague is to shoot dead anyone infected with it—brutal, but effective. He decides to start a new war with the Hill People of the Floss Valley to obtain their resources of coal and shale. That way, he will have a source of gas to fly his ragtag collection of prewar planes again.

A sleek new airplane lands in Everytown which alarms the locals as they haven’t seen a new machine in many, many years. When Cabal emerges from it, he lets it be known that the last surviving band of engineers and mechanics known as “World Communications” have formed a civilization of airmen based in Basra, Iraq.

There, they outlawed war so they can rebuild civilization throughout the Near East and the Mediterranean. While Cabal considers the Boss and his band of warlords to be criminals, he offers them the opportunity to join them in rebuilding the world. The Boss rejects such a foolish idea, and immediately imprisons Cabal. Now he must work with the Boss’ mechanic, Gordon, who tries his best to keep the old biplanes airworthy. Once Gordon takes an Avro 504K up for a test flight, he defects to Iraq to alert World Communications.

Soon, gigantic flying wing aircraft from World Communications’ Wings Over the World arrive over Everytown where they saturate the local population with sleeping gas. While the Boss orders his air force to attack, his obsolete fighters can not inflict any noticeable damage on the new armada.

As the townsfolk wake shortly thereafter, they find themselves under the control of Wings Over the World. The Boss is now dead after suffering a fatal allergic reaction to the sleeping gas. With that, Cabal notes, “Dead, and his old world dead with him…and with a new world beginning…and now for the rule of the Airmen and a new life for mankind.”

We next see one final montage where the world experiences decades of technological progress. Cabal explains Wings Over the World’s global plans for consolidation. By the time 2036 rolls around, mankind lives in modern underground cities—including the new Everytown.

While humanity now dedicates itself to peace and scientific progress, all is not well. The sculptor Theotocopulos convinces the populace to demand a rest from all this progress—progress culminating in the first manned flight around the Moon.

Oswald Cabal, the head of the governing council (and grandson of John Cabal) opposes these modern-day Luddites. Oswald’s daughter Catherine and Maurice Passworthy insist on manning the capsule to the Moon. After a mob later forms, they rush to destroy the space gun which will be used used to propel the projectile toward the Moon. Instead, Cabal launches it ahead of schedule.

Later, after the projectile is just a tiny speck in the night sky, Oswald delivers a final philosophical monologue about what is to come for mankind to his troubled friend, Raymond Passworthy (Maurice’s father). He speaks for progress—for humanity’s unending quest for knowledge and advancement as they journey out into the stars. “All the universe or nothingness? Which shall it be, Passworthy? Which shall it be?”