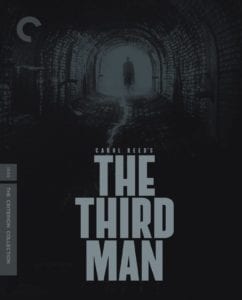 The Third Man is a 1949 film noir classic starring Orson Welles, Joseph Cotten, and Alida Valli. Carol Reed directed the film, and Graham Greene wrote both the screenplay and novella. Anton Karas wrote and performed the score, which was played on a zither.

The film takes place in post-World-War-II Vienna amongst bombed-out buildings and barren streets. Robert Krasker’s black-and-white expressionist cinematography uses harsh lighting and the “Dutch angle” camera technique to create a maddening unease that draws you into the exhausted world that the people in Vienna experience daily.

Calloway informs Martins that Lime was a criminal, and that he should take the next plane out of town. Martins prepares to leave, but an official of the British occupying forces (Wilfrid Hyde-White) asks Martins to give a lecture.

When he offers to pay for Martins’ lodging, Martins agrees to stay for the lecture, and uses his free time to clear Lime’s good name. Along the way, Martins meets Lime’s associates and girlfriend, Anna Schmidt (Alida Valli). Eventually, Martins learns that Lime may not be the outstanding citizen he grew up with, and when he comes face to face with Lime himself, things take a turn for the worse.

What happens next is what makes The Third Man one of the best examples of cinema from the 1940’s.

In many ways, The Third Man was ahead of it’s time; capturing the feel of a movie made in the 1960s or 70s. The story draws you in from beginning to end, and both Joseph Cotten and Orson Welles give outstanding performances. Alida Valli, as Anna Schmidt, Lime’s girlfriend, also gives a great performance as a woman who stands by her man when it’s clear her man has no loyalty towards her.

The soundtrack, which only uses a zither, is both haunting and jarring, and it compliments the cinematography to create this gloomy and distressed world.

The Third Man is one of the finest examples of film noir ever created, and the film itself is one of the best ever made. Fans of this genre must see this film if they haven’t already, and that is why this film is MHM’s May pick for the 12 Retro Movies Everyone Should See In 2017.

Pulp novelist, Holly Martins, travels to postwar Vienna, only to find himself investigating the death of his old friend, Harry Lime.