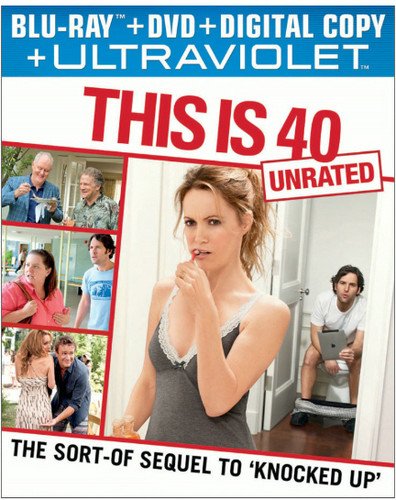 The comedy is an indirect sequel to Knocked Up.  It expands upon the story of Pete (Rudd) and Debbie (Mann) and how they are dealing with their current state of life as well as reaching the big 4-0.  This Is 40 is an unfiltered, comedic look inside the life of an American family.  After years of marriage, Pete (Rudd) and Debbie (Mann) are approaching a milestone meltdown.  As they try to balance romance, careers, parents and children in their own hilarious ways, they must also figure out how to enjoy the rest of their lives. This Is 40 is a candid and heartwarming comedy about the challenges and rewards of marriage and parenthood in the modern age.

This Is 40 was released in December of 2012 and has grossed over $66 million at the box office to date.

The Blu-ray edition of This is 40 will offer both an R-Rated theatrical version and Unrated Cut of the film, as well as a standard DVD and UltraViolet digital copy.  It will include several special features, including: a feature commentary with writer/director Judd Apatow; The Making Of This Is 40 featurette; This Is Albert Brooks (At Work) featurette; Graham Parker & The Rumour: Long Emotional Ride featurette; Brooks-O-Rama; Biking With Barry; Triumph The Insult Comic Dog; Kids On The Loose 3; Bodies By Jason Commercial; Fresh Air With Terry Gross; deleted, extended, and alternate scenes, gag reel, and more.