The world has many heroes… but only one is a god. When the arrogant warrior Thor is banished to Earth from his home world of Asgard, he must fight to reclaim his lost powers. Pursued by an invasion force sent to destroy him, the fallen God of Thunder must rise to the battle and learn what it takes to become a true hero. 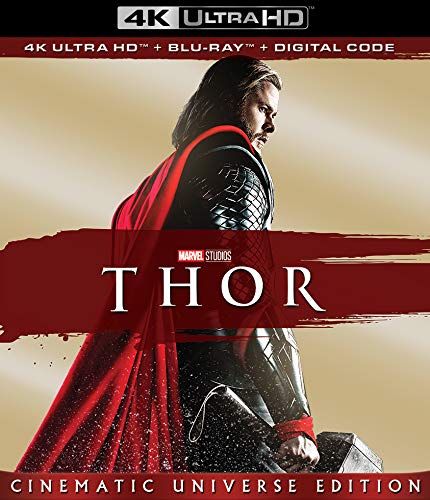 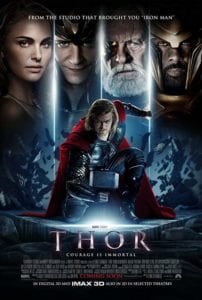 Over a thousand years ago, Odin, king of Asgard, fought the Frost Giants to prevent them from conquering the nine realms. His Asgardian warriors defeat the Frost Giants in Tønsberg, Norway, and capture the source of their power called the Casket of Ancient Winters.

Cut to the present day, and Odin’s son, Thor, prepares to ascend the throne. However, when the Frost Giants return for their Casket, Thor, his brother Loki, Sif, and the Warriors Three confront the Giant’s leader, Laufey…against Odin’s wishes.

Odin must intervene to save the Asgardians which ends the truce between the two peoples. For his defiance, Odin strips Thor of his godly powers, and exiles him to Earth with his hammer the Mjölnir.

Thor winds up in New Mexico, where Dr. Jane Foster, Dr. Erik Selvig, and Darcy Lewis find him. After the locals discover Thor’s hammer, S.H.I.E.L.D. agent Phil Coulson takes possession of it AND Dr. Foster’s data about the wormhole that brought Thor to Earth. Thor finds his hammer, but can not lift is as his father placed a spell on it where only someone worthy can wield it.

Meanwhile, Loki discovers that he is actually Laufey’s biological son. Odin adopted him after the war ended. He confronts Odin about it, and takes his throne when Odin enters a deep sleep. Loki then offers Laufey the chance to kill Odin, and retrieve his Casket. Sif and the Warriors Three don’t like this, and attempt to bring Thor back from Earth to stop Loki.

Loki sends the Destroyer after all of them. It’s only after the Destroyer defeats them all, and Thor sacrifices himself for the others that he proves himself worthy to wield his hammer. It restores Thor’s powers, and he defeats the Destroyer. Thor, Sif, and the Warriors Three then leave to take down Loki.

Back home, Loki kills Laufey, before Thor arrives to fight him. Odin wakes from his long sleep to prevent the two from falling into an abyss. However, Loki allows himself to fall anyway after Odin rejects him. Thor and Odin make up, but Thor isn’t ready to be king. Back on Earth, Dr. Foster tries to open a portal to Asgard.

In a post-credits scene, Dr. Erik Selvig is brought to a S.H.I.E.L.D. facility, where Nick Fury asks him to study a mysterious cube which Fury says may hold untold power. An invisible Loki uses a Jedi mind trick to force Selvig to agree to help.