Thor is imprisoned on the other side of the universe without his mighty hammer and finds himself in a race against time to get back to Asgard to stop Ragnarok—the destruction of his homeworld and the end of Asgardian civilization—at the hands of an all-powerful new threat, the ruthless Hela. But first he must survive a deadly gladiatorial contest that pits him against his former ally and fellow Avenger—the Incredible Hulk! 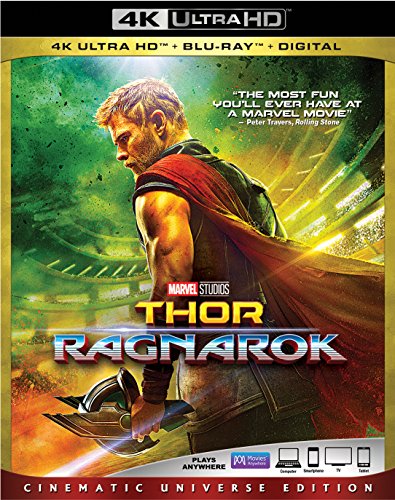 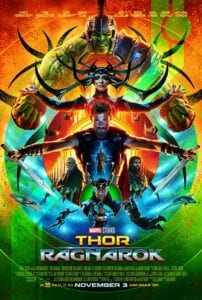 Thor: Ragnarok takes place two years after the battle of Sokovia. We find the fire demon Surtur has imprisoned Thor, and that his father Odin is not on Asgard. Once Surtur unites his crown with the Eternal Flame that burns in Odin’s vault, it will bring upon the prophesied Ragnarök, and destroy the entire realm.

Thor is able to free himself, take down Surtur, and steal his crown in one fair swoop; thus preventing the aforementioned Ragnarök. However, when Thor returns to Asgard, Heimdall is missing, and his brother, Loki, is posing as Odin. Thor exposes Loki’s fraud, and then forces him to help find Odin. Using the directions Stephen Strange gave him on Earth, they find their father near death in Norway.

He tells Thor that despite his best efforts, Ragnarök will soon be upon us. When he passes away, that will allow his firstborn child, Hela, to escape from a prison she was sealed in long, long ago.

Once upon a time, Hela was the leader of Asgard’s armies. She helped Odin conquer the Nine Realms, but he imprisoned her, and wrote her out of history when she became too ambitious and too powerful. As Odin dies, Thor and Loki watch on. Hela appears, and destroys Thor’s hammer Mjolnir.

The two brothers flee through the Bifröst Bridge. Hela takes chase, and forces them into space. She then heads to Asgard, and quickly defeats its army. She kills the Warriors Three, and resurrects the ancient dead. Amongst those who once fought for her is her giant wolf Fenris and her executioner, Skurge. Hela intends to use the Bifröst to expand Asgard’s empire. However, Heimdall steals the sword that controls it, and starts hiding as many Asgardian survivors as possible.

Meanwhile, Thor has crash landed on the planet Sakaar known for its immense garbage. A slave trader and old Valkyrior warrior named Scrapper 142, who was once part of a legendary army of female fighters Hela killed eons ago, takes Thor down with an obedience disk. He’s then sold as a gladiator to Sakaar’s ruler, the Grandmaster. When we meet the Grandmaster, we see Loki there, and is already BFFs with the ruler.

The Grandmaster forces Thor to compete in his Contest of Champions against the Hulk. The two battle until Thor summons lightning to get the upper hand. However, the Grandmaster sabotages their fight to make sure the Hulk wins.

After the fight, Thor tries to recruit Hulk and 142 to help him save Asgard. Both say no. So, Thor escapes the palace where he finds the Quinjet that the Hulk used to come to Sakaar. When the Hulk follows Thor to it, a recording of Natasha Romanoff calms him down enough to transform himself back into Bruce Banner.

The Grandmaster demands 142 and Loki bring back Thor and Hulk, but they can not work together. Loki, ever the dick, makes her relive Hela’s destruction of the Valkyrior warriors. So, 142 decides to help Thor instead, and she captures Loki.

Loki now wants to come along instead of getting left behind. He helps them steal one of the Grandmaster’s ships, and then helps free some other gladiators; Korg and Miek where they start a little revolution.

Once again, Loki betrays Thor, but Thor’s ready for it. He leaves Loki behind for Korg, Miek, and their merry gladiators to find him. Thor, Banner, and 142 next use a wormhole to return to Asgard. There, they find Hela’s forces attacking Heimdall and the few remaining Asgardians. However, Hela still doesn’t have the sword that controls the Bifröst.

Banner transforms into Hulk again, and takes on Fenris. That leaves Thor and 142 to fight Hela and her warriors. Loki and the gladiators arrive from Sakaar to rescue the Asgardian citizens; only to find Skurge’s help where he sacrifices himself to aid their escape.

Thor takes on Hela…and loses his right eye. A vision of Odin suddenly strikes him where he realizes that only Ragnarök can stop Hela. Loki then retrieves Surtur’s crown, and places it in the Eternal Flame. When Surtur is reborn, he destroys Asgard and kills Hela.

With Thor now king, he boards the Grandmaster’s spaceship, and takes the remaining Asgardian citizens to Earth.

In a mid-credits scene, Loki visits Thor, and asks if going to Earth is a good idea as a large spaceship appears in front of theirs.

In a post-credits scene, the overthrown Grandmaster declares the revolution a draw in a feeble attempt to placate the citizens of Sakaar.