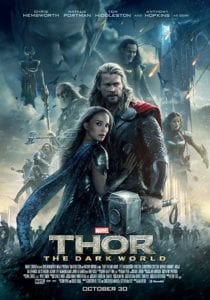 Thor: The Dark World begins before Odin with his father, Bor. Once upon a time, he battled the Dark Elf Malekith to keep him from unleashing a weapon known as the Aether on the nine realms. Eventually, Bor goes to their home world of Svartalfheim where he defeats Malekith and his armies; including a group of super warriors called the Kursed. Bor then safeguards the Aether within a stone column. What Bor doesn’t know is that Malekith, his lieutenant Algrim, and a handful of Dark Elves escape into suspended animation…

We flash forward to present-day Asgard where Loki is in prison for his war crimes against Earth. Thor, Fandral, Volstagg, and Sif are on Hogun’s home world of Vanaheim taking on various marauders in what will wind up the final battle in the war to pacify the Nine Realms. This battle comes two years after the Bifröst, the Rainbow Bridge, connecting the realms was destroyed and rebuilt.

It’s also at this time that the Asgardians discover that the Convergence, a rare alignment of the Nine Realms, is on the horizon. This results in many portals randomly appearing that link the various worlds together.

Out in London, astrophysicist Dr. Jane Foster and her intern Darcy Lewis head over to an abandoned factory to see some of these portals that have appeared. When Foster gets sucked into one, she’s sent to another realm where the Aether infects her.

When Heimdall lets Thor know that Foster is no longer in his all-seeing sights, Thor goes to Earth to find her. Once Thor tracks her down, Foster accidentally releases the Aether into the world again when she heads to Asgard with him. Odin recognizes the Aether, and he warns that it will not only kill Foster, but also set into motion a catastrophic prophecy.

The Aether’s release rouses Malekith from his slumber, and he turns Algrim into a Kursed, and they attack Asgard. As the battle wages, Malekith and Algrim search for Foster as Malekith senses that she contains the Aether. Thor’s mother, Frigga, dies protecting Foster before Malekith and Algrim flee without her.

Although Odin’s orders Thor not to leave Asgard, he does so anyway; enlisting the help of Loki because he knows of a secret portal to Svartalfheim. There they can use Foster to lure out Malekith, and take him down away from Asgard. In return for his help, Thor promises Loki to help avenge their mother’s death. Volstagg and Sif stall the Asgardian soldiers while Fandral assists their escape. Thor, Loki, and Foster head out to Svartalfheim.

Loki manages to trick Malekith into drawing the Aether out of Foster, but when Thor tires to destroy it, he fails. Malekith uses the opportunity to become one with the Aether, and then leaves the scene in his ship. Loki tries to help stop him, but winds up mortally wounded as he kills Algrim. Thor takes Loki in his arms, and promises to tell Odin of his sacrifice.

Next, Thor and Foster catch a portal in a nearby cave, and return to London to meet with Lewis and Foster’s mentor Dr. Erik Selvig. Selvig had a brief stint in the loony bin because of Loki’s attack in the previous Thor film.

Malekith looks to unleash the Aether at the epicenter of the Convergence in Greenwich; thus restoring the Dark Elves’ domination over the realm. Thor must now battle him through various portals on multiple worlds. When one portal separates the two, leaving Malekith unopposed on Earth, shit goes down. However, Thor returns in just time to help Foster and Selvig use their fancy dancy scientific equipment to transport Malekith back to Svartalfheim. Once there, his very own damaged ship crushes him to death.

With this battle now over, Thor returns to Asgard victorious. Odin offers Thor his throne, but he declines. Instead, he tells his father of Loki’s sacrifice for the greater good, and then turns to leave. As he does, Odin transforms into Loki who is alive and well. He was only impersonating Odin to test Thor.

In a mid-credits scene, Volstagg and Sif visit Taneleer Tivan. With the Tesseract already in Asgard, having two Infinity Stones so close together would not be a smart move. As they leave, Tivan states his desire to acquire the other five Stones.

Finally, in a post-credits scene, Jane Foster entertains some colleagues in her London flat. A portal opens on her balcony where she finds Thor waiting for her, and the two share a hug. Meanwhile, a Jotunheim Beast, accidentally transported to Earth, cuts through the tranquility of the city, and rampages through it.