Smokejumper Hannah Faber is a senior firefighter who is struggling with post traumatic stress disorder after failing to prevent the deaths of three young campers. Relegated to the ground duty, she is posted to a remote fire lookout tower in Park County, Montana. She encounters Connor, a young boy who has witnessed his father’s murder and is being pursued by two assassins. Now, Hannah must not only help Connor escape the two killers, but a raging forest fire that threatens to consume them all. 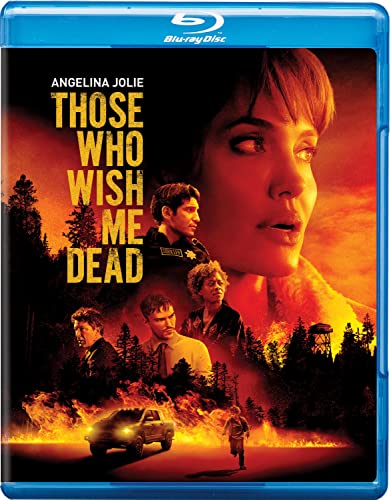 Those Who Wish Me Dead (Blu-ray + Digital)

‘Those Who Wish Me Dead’ Movie Summary 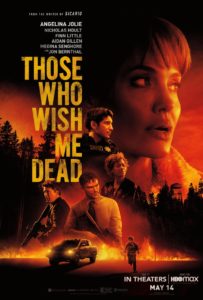 Smokejumper Hannah Faber (Angelina Jolie) is a senior firefighter who is struggling with post traumatic stress disorder after failing to prevent the deaths of three young campers and a fellow smokejumper in a forest fire. As a result, she has been taken off her smoke-jumping assignment and posted alone in a remote fire lookout tower in Park County, Montana.

In Miami, forensic accountant Owen Casserly (Jake Weber) learns that his boss and his family have been killed in a mysterious gas explosion. In reality, they were murdered by assassins Jack and Patrick Blackwell (Aidan Gillen and Nicholas Hoult). Owen is suspicious of the deaths and believes he is the next target based on the information he knows. Widower Owen grabs his son Connor (Finn Little) and goes on the run. Owen formulates a plan to hide out with his brother-in-law, Ethan Sawyer (Jon Bernthal), who is a Deputy Sheriff in Park County. However, Owen and Connor are ambushed by the Blackwells as they near Ethan’s home. Owen’s car is forced off the road, and Owen is severely injured. Owen tells his young son to run and hide in the forest and gives him evidence against Blackwells’ employer, the evil mob boss Arthur Phillip (Tyler Perry). As Connor runs off, Owen is killed by the Blackwells.

While patrolling the forest, Hannah stumbles upon a visibly shaken Connor. She takes him back to the tower to attempt to contact help but discovers that the radio equipment has been damaged by a lighting strike. At the same time, Ethan discovers Owen’s car wreck along the road. Meanwhile, the Blackwells report back to their boss, who orders them to find Connor and kill him. The hitmen decide to create a diversion to keep law enforcement preoccupied while they hunt for the boy. They use roadside flares to start a forest fire.
The Blackwells first stop at Ethan’s house and pose as federal agents. They encounter Ethan’s pregnant wife, Allison (Medina Senghore), who immediately sees through their ruse. The Blackwells begin to interrogate Allison and force her to call Ethan. She gives her husband a duress code, but Jack figures it out. Allison manages to fight off the hitmen, and severely burns Jack. She escapes into the forest.

Back in the forest, Hannah attempts to take Connor back to civilization by hiking out of the forest. However, they are forced to turn back when the forest fire that the Blackwells started blocks their path. At the same time, Ethan returns home with the Sheriff in the hopes of saving Allison. However, the Blackwells ambush the two lawmen and kill the Sheriff. The hitmen force Ethan to guide them through the woods, starting at the site of Owen’s car crash. Ethan tries to mislead them, but the Blackwells discover his deception and force him to comply.

A reluctant Ethan leads the hitmen to Hannah’s fire tower, and the hitmen force Ethan to search it as they watch him from a nearby tree. Hannah and Connor see them coming and hide. Ethan finds them in the tower but attempts to make it appear to the Blackwells that the tower is empty. Using a rifle scope, Patrick sees Ethan talking to someone in the tower, so the hitmen open fire. Ethan is hit, but Hannah and Connor manage to escape in the darkness. The Blackwells attempt to follow Hannah and Connor, but they are stopped when Allison arrives and begins to open fire on them with a high-powered rifle. The hitmen separate, with Patrick pursuing Hannah and Connor towards the fire and Jack staying to fight Allison. However, Allison gets the better of Jack and kills him.

Hannah has Connor run ahead while she turns to fight Patrick in the hopes that it will distract the hitman from killing the boy. However, Patrick easily defeats Hannah and threatens to kill her if Connor doesn’t return and reveal himself. Connor comes back to help Hannah, but before Patrick can kill the young boy, Hannah severely injures Patrick with her climbing axe. Hannah and Connor run off as the fire approaches, and the injured Patrick is killed by the fire.

Nearby, Allison finds her injured husband at the top of the fire tower. The two of them are trapped at the top due to the fire. They put on oxygen masks and hold each other as the fire burns below them. At the same time, Hannah and Connor attempt to outrun the fire on foot. They jump into a stream and watch from under the water as the fire engulfs the forest.

The next morning, the fire has passed, and Hannah’s old smoke-jumping team arrives to survey the damage. They find a badly injured Hannah and Connor, both survivors of the fire. Unfortunately, Ethan has died from his gunshot wounds, but Allison and her unborn baby survived. Connor is nervous about sharing his father’s evidence against Arthur with the media, but Hannah promises to help him through the uncertain future that awaits him.