When a silent film studio fires Lucky Day, Dusty Bottoms and Ned Nederlander, they take a job offer from Mexico to perform a show for their most famous actor, El Guapo. Once they arrive, they learn El Guapo is not an actor, but a cruel bandido terrorizing a poor village. When he abducts the mayor’s beautiful daughter in revenge for the people hiring the Amigos, the Amigos spring into action in hopes of saving the day for real. 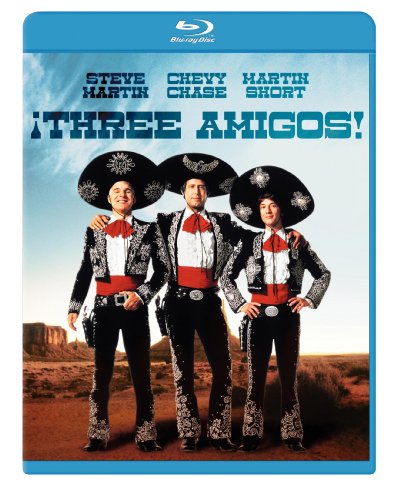 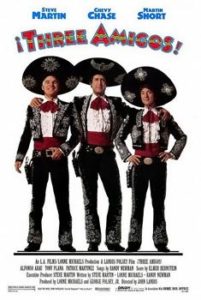 In 1916,  a bandido named El Guapo (Alfonso Arau) terrorizes the Mexican village of Santo Poco with his gang. They have collected so much protection money from the village, everyone is now dirt poor. Carmen (Patrice Martinez) is daughter of the village’s mayor and she’s in search of anyone who can help rescue her town.

When she goes to church in search of a miracle, she watches a silent film featuring the Three Amigos. They are a trio of gunfighters who protect the peasants from evil; kind of like the Lone Ranger, but there are three of them. Not understanding the film is fiction, Carmen telegrams our heroes to stop El Guapo.

We meet Lucky Day (Steve Martin), Dusty Bottoms (Chevy Chase), and Ned Nederlander (Martin Short)—collectively known as THE THREE AMIGOS! The men are Hollywood’s newest unemployed actors because they demanded a salary increase. It’s not too long after when they receive Carmen’s telegram. However, because Carmen had limited money to send the telegram, the message was edited to the point our amigos misinterpret it as a job offer to perform a little show in Santo Poco.

They accept and return to the studio to retrieve their costumes. Once they do, they hightail it to Mexico. At a lone cantina outside of Santo Poco, the locals confuse the three for the associates of a German pilot (Kai Wulff) who are scheduled to arrive at the same time. The boys still think they are only there to perform so they give the borrachos a stirring rendition of My Little Buttercup; leaving everyone confused but entertained.

When the German’s real associates (Norbert Weisser and Brian Thompson) arrive at the cantina, everybody laughs at them. So the men shoot up the place. By now, Carmen has spotted the Amigos and she takes them to the village. She sets them up in the best house in town to pamper them before their battle.

The next morning, three of El Guapo’s men, led by his right hand man, Jefe (Tony Plana), raid the village. The Amigos do their Hollywood-style stunt show which amuses Jefe. The bandidos ride off, and the villagers celebrate. However, the Amigos haven’t defeated anyone. When Jefe informs El Guapo of the strange men, he decides to return the next day to kill the Amigos.

The next morning, El Guapo and his gang come to town and call out the Amigos. The three show up, thinking it’s just another show. When El Guapo has one of his men shoot Lucky, the Amigos finally understand El Guapo means business and they are in real mierda. The Amigos cry and beg for mercy. El Guapo allows the Amigos to live, and then orders his men to the village for everything they have as punishment for hiring the Amigos. El Guapo then kidnaps Carmen before leaving Santo Poco a broken town.

However, Ned won’t give up. The Amigos have nothing to return home to anyhow. He persuades Lucky and Dusty to go after El Guapo and be real heroes for once. When the German’s plane flies overhead, the Amigos follow it.

Turns out the German is in Mexico to deliver a shipment of rifles for El Guapo. Additionally, it’s El Guapo’s 40th birthday, and he’s preparing a big fiesta to celebrate which will culminate in his taking Carmen’s flower from her.

The Amigos attempt to sneak into the hideout, but the bandidos capture Lucky and chain him up in the dungeon. Dusty crashes into Carmen’s room, and Ned gets stuck in the air when he swings across the plaza and his spurs catch on a piñata. Ned eventually falls to the ground and hits a table attracting the bandidos attention, and they also capture Dusty. However, Lucky finally makes it out of the dungeon.

When the German spots Ned, he recognizes him as his childhood idol. He learned to draw a gun as quick as Ned and even mimic his gun spinning skills… then he learned about trick photography, and was disappointed in his idol wasn’t who he thought he was. The German challenges Ned to a shootout. However, Ned’s skills are legitimate—no trick photography—and he kills the German. Lucky then shows up and holds El Guapo at gunpoint long enough for Carmen and the Amigos to escape in the German’s plane.

Once back in Santo Poco, the Amigos inform the town El Guapo and his gang are in hot pursuit. The Amigos take inspiration from one of their old films, and have the villagers improvise Amigos costumes to confuse El guapo. When the bandidos arrive, Amigos shoot at them from all sides. Scared and confused, El Guapo’s men either ride off or the villagers shoot them. They mortally wound El Guapo, and as he dies, the villagers, all dressed as Amigos, surround him in victory. El Guapo congratulates the Amigos before shooting Lucky in the foot. He then dies.

With the town saved, the villagers give the Amigos all the money they have, but the Amigos refuse it with their signature movie line: “Our reward is that justice has been done.” A sexy señorita (Rebecca Ferratti ) not seen before in the village gives Ned a passionate kiss and the Three Amigos ride off into the sunset.