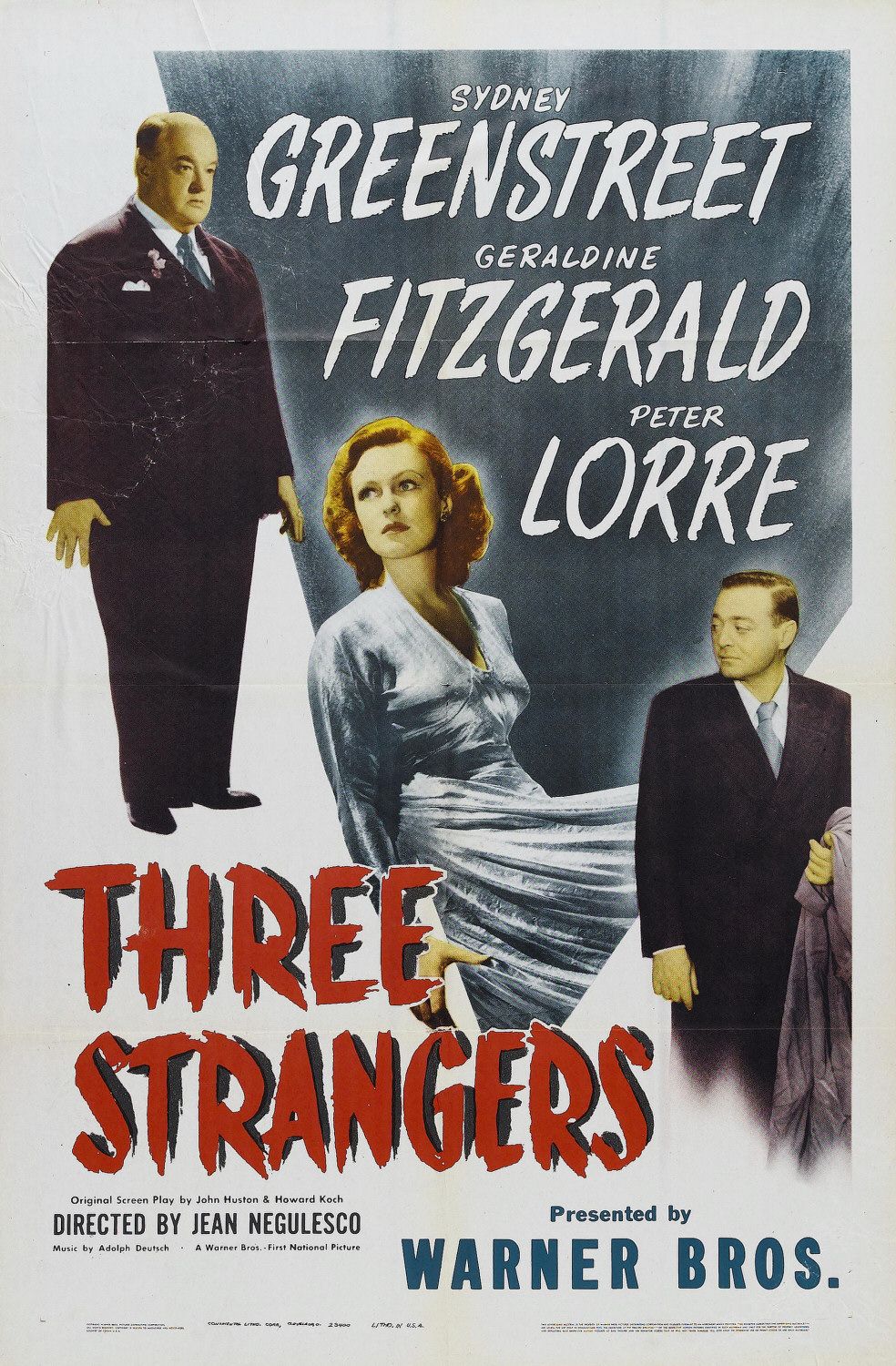 Warner Bros. released Three Strangers on January 28, 1946. Jean Negulesco, known for Johnny Belinda, How to Marry a Millionaire, and The Best of Everything, directed the film noir. The crime/drama stars Peter Lorre, Sydney Greenstreet, and Geraldine Fitzgerald, with featured performances from Joan Lorring and Alan Napier. John Huston and Howard Koch wrote the script.

When fate brings three strangers together one night, they pledge before a Chinese idol to share a sweepstakes ticket if it wins. Once the three go their separate ways, we learn that each one of them has major turmoil in their lives. The calculating Crystal attempts to woo her estranged husband back by any means possible. The alcoholic Johnny West is on the lamb from the murder of a police officer, and Jerome K. Arbutny schemes to get back the trust money he embezzled from his naive client before she is any the wiser.

As the three stories play out, the looming sweepstakes nears. Who wins? Who loses? Only the Chinese idol knows for sure.

Crystal, Johnny, and Jerome all exude the tropes of the this crime/drama genre of the 1940s. Geraldine Fitzgerald plays an ornately dressed woman who wants her man—not because she’s in love, but because she wants what she can’t have. She is cunning, sly, and deceptive—a true bitch for her generation, and I don’t mean that in a bad way.

Sydney Greenstreet plays the proper middle-aged gentleman who’s not as proper as he seems. His character, Jerome, isn’t a good person, but Sydney manages to portray a sympathetic character throughout—even when all seems to be lost for him, and he descends into madness.

And finally Peter Lorre, well, he pretty much steals the show. His Johnny West character is a lovable drunk who has fallen into the wrong crowd, but he really is the glue that binds the three stories together. His subdued manner plays perfectly off every character in the film. Even when the police charge him with murder, you’re rooting for them to set him free.

This melodrama is not a deep story, but it’s an enthralling one from beginning to end. The cast is solid. The cinematography is excellent; in fact, I’d say it’s one of Warner Bros. best film noirs, and Jean Negulesco proves once again why he is one of the best crime/drama directors of that era. At 92 minutes long, this is a definite film to put on your list to watch.