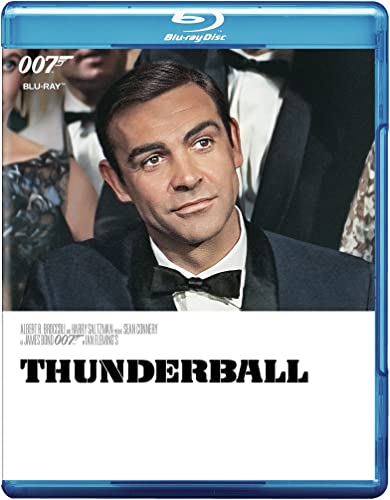 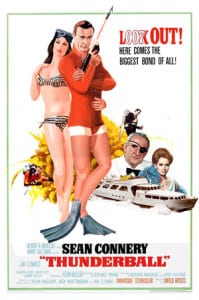 SPECTRE is at it again. This time, their plot involves sending an undercover agent to pose as the copilot of a nuclear bomber to kill the crew and steal the nukes. They do just that and hold NATO hostage for one million dollars, or he will blow up a major American city and a major British city. Sorry, two hundred seventy million dollars. SPECTRE is headed by the mysterious, cat-stroking Number One. But he delegates the management of this particular plot to the one-eyed #2.

James Bond is hot on their tail. And by hot on their tail, I mean he starts shagging Number Two’s number one, Domino. Bond uses Domino to get close to Number Two, I think. Bond wastes a lot of time at this point, dancing, and sneaking, and fighting without any clear purpose. He gets shot at one point, I think.

Bond manages to turn Domino by telling her that Number Two killed her brother. She then promises to help him find the nukes. Bond infiltrates SPECTRE and scubas with them as they deliver the nukes near Miami. I guess SPECTRE couldn’t get close enough to a major American city.

The CIA then intervenes and settles things with a lengthy underwater knife and harpoon fight, which they narrowly win. Number Two flees with Bond in pursuit. Bond fights off a swarm of henchmen while Domino kills Number Two with a harpoon of her own. The nukes are recovered, and Miami remains a safe haven for pink button up shirts and white hats.