In a dystopian future, THX 1138, LUH 3417, and SEN 5241 attempt to escape from a society that has outlawed sex and individuality with mind-controlling. When THX 1138 stops taking the drugs, and gets LUH 3417 pregnant, authorities arrest them both; forcing them to plan their escape. 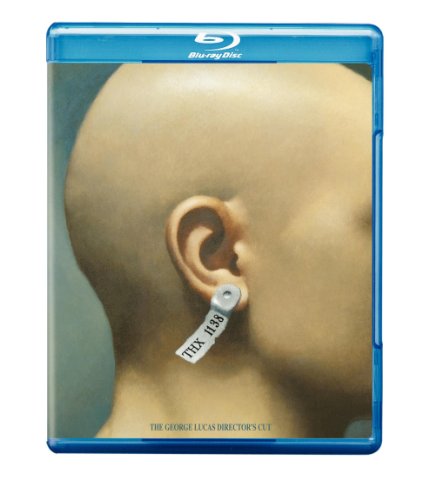 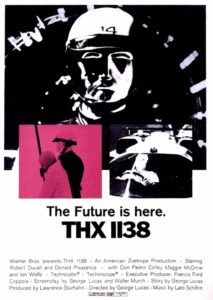 Sometime in the 21st century the government began forcing people to take mind-altering drugs to eradicate human emotion, sexual intercourse, and any concept of family. Additionally, the government mandated everyone wear identical uniforms and shave their heads to ensure equality. They only made allowances for the police androids, who wear black, and robed monks. People no longer have family surnames, but instead, the government assigns a person three prefix letters followed by four digits for their identity which they will wear on a badge at all times until death.

The film begins at a central video control center where SEN 5241 (Donald Pleasence) and LUH 3417 (Maggie McOmie) surveil the city. LUH’s roommate, THX 1138 (Robert Duvall) works at a factory that builds android police officers. As THX leaves work, loudspeakers blare out to the factory to increase work safety. They offer their congratulations for only losing 195 workers in the last period whereas the competing factory lost 242.

On his way home, THX stops at a confession booth to offer some uninspired thoughts and prayers to the party. On his way out, the state-sanctioned deity, OMM 0000 (James Wheaton), offers some inspirational words, “You are a true believer. Blessings of the state, blessings of the masses. Thou art a subject of the divine. Created in the image of man, by the masses, for the masses. Let us be thankful we have an occupation to fill. Work hard; increase production, prevent accidents, and be happy.”

Once he returns home, THX takes his drugs then watches some holo-broadcasts like good a “number” does. When LUH secretly swaps out some of THX’s pills, he becomes violently ill and has a mental and emotional breakdown. This drug substitution also leads to LUH and THX having forbidden sex.

SEN later arranges to have THX as his new roommate to separate him from LUH. However THX doesn’t like that, and files a complaint against him for an illegal housing change. At work, THX fails to perform during a critical moment due to a lack of drugs in his system. The control center puts a mind lock which allows THX makes the necessary correction to successfully complete his job. Authorities then arrest THX and LUH who reveals she’s now pregnant.

Authorities then sentence THX to prison along with SEN. While most of the prisoners in their cell are uninterested in escaping, THX and SEN are. They, and a hologram named SRT 5752 (Don Pedro Colley), find a hidden exit and leave through it. During the escape, police androids chase the three until SEN winds up separated from the other two. THX and SRT then find themselves trapped in a control center. It’s there that THX learns that the government has consumed LUH and reassigned her name to fetus 66691 that’s in a growth chamber.

SEN manages to find an area reserved for the monks of OMM. However, one of the monks notices he doesn’t have an identification badge. SEN has no choice but to attack him. He then flees to a child-rearing area where he chats with the kids until police androids arrive and arrest him.

By now, THX and SRT have stolen two cars with the police androids in hot pursuit. SRT crashes his car into a concrete pillar, but THX makes it to the edge of the city’s limits. He hops out and he escapes into a ventilation shaft.

While the police androids are still on his tail, Central Command orders them to halt their pursuit. It claims that the expense to capture THX exceeds their budget by 6%. It’s only then that we learn that the city he’s escaped is built entirely underground. THX finds himself on the planet’s surface where he witnesses the sun setting for the first time in his life.