Based on the book series by Stephan Pastis, Timmy Failure is a precocious 11-year-old who lives with single mother Patty in Portland, Oregon. Timmy has a vivid imagination and often interacts with his imaginary friends, the most frequent being his polar bear partner Total. Timmy runs Total Failure Inc., his own personal detective agency. He investigates cases around the neighborhood and continues his fight against the Russians, Timmy’s archenemies. 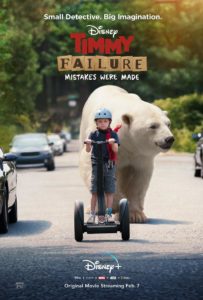 Timmy Failure (Winslow Fegley) is a precocious 11-year-old who lives with his single mother Patty (Ophelia Lovibond) in Portland, Oregon. Timmy has a vivid imagination and often interacts with his imaginary friends, the most frequent being his polar bear partner Total. Timmy runs Total Failure Inc., his own personal detective agency. He works on solving cases around the neighborhood. During his investigations, Timmy often has to work to outwit the “Russians”, who in reality are simply bearded hipsters.

Timmy’s best friend is Charles “Rollo” Tookus (Kei), a former member of Total Failure Inc., who quit after a mission went “bad”. Timmy also hangs out with Molly Moskins (Chloe Coleman), a constantly optimistic girl who has a crush on Timmy. Timmy’s perceived archenemy is Corrina Corrina (Ai-Chan Carrier), a young girl who appears to be very friendly to Timmy and is oblivious to his animosity towards her. However, it is implied that Timmy may have feelings towards her.

Timmy is working on an assignment to retrieve a dead hamster from a fellow classmate. He takes his Failure-Mobile, which is his mother’s Segway, to the scene. The Failure-Mobile is stolen from him during the mission. As a result, he cancels all his cases and contacts Rollo, who believes the hamster death and stolen Segway are linked back to the Russians. At the library, Timmy learns that Corrina Corrina is part Russian and believes that she is behind the theft to disrupt his agency.

At school, Timmy is required to see the school counselor due to his strange behavior in class. The counselor, Mr. Jenkins (Craig Robinson), eventually wins over Timmy who begins to trust him with information about his mission. Timmy also learns that his mother is dating a meter maid named Crispin Flavius (Kyle Bornheimer) who is friendly with Timmy, but Timmy dislikes him since the young detective does not cooperate with law enforcement.

During his investigation, Timmy learns that Corrina Corrina’s father owns a bank and theorizes that the stolen Segway maybe there. He and Rollo attempt to sneak into the bank, but they are kicked out by security. Mr. Jenkins manages to get Timmy to do his homework as part of his mission, but while doing so he learns from Patty that they have to move to an apartment. This upsets Timmy since he has a heavy caseload to work on.

Timmy’s class takes a field trip to the Bonneville Dam. Timmy falsely concludes that Corrina Corrina plans to shut off the power to all of Portland. Timmy rushes through the dam looking for Corrina Corrina, unaware that she is still with the class tour. Timmy is pursued by his teacher, Frederick Crocus (Wallace Shawn). Mr. Crocus and Timmy both end up outside the dam just as the operators open the flood gates. Timmy tries to protect Mr. Crocus due to his respect for the teacher. When the flood gates are opened, neither Timmy nor Mr. Crocus are washed off the dam.

However, Timmy is suspended for three days because of his behavior, and Mr. Crocus quits his job. Patty is angry because of the suspension and is fired from her job because she has to stay home with Timmy. She shuts down Total Failure Inc. Timmy is sad that he will now be forced to live a normal life and lets Total go to live at the zoo.

In the aftermath, Mr. Jenkins talks to Jimmy and reminds the boy that he must learn from his mistakes in order to be a better person. Shortly afterwards, Timmy discovers a “Russian bug” in his cookie which reinvigorates Timmy’s investigative drive. He recruits Crispin to help him liberate Total from the zoo. On their way back from the zoo, the pair spot a purse snatcher, and Crispin gives chase. The meter maid catches the thief. Timmy considers helping his mom’s boyfriend, but instead, he simply calls the police. A passerby asks Timmy and Total to move, acknowledging the polar bear’s presence, and Timmy subsequently accidentally backs up Crispin’s truck into a pole.

Timmy is taken to the hospital where his mother comes to see him. Timmy apologizes for his behavior, and Patty tells her son that she wants him to re-open his detective agency. Soon after, Crispin shows Timmy that the Segway was impounded at the police station this whole time for being parked in a no-parking zone. Timmy is convinced that the police are working with the Russians against him. Timmy gives a speech at an animal fundraiser set up by Molly. His speech about allowing polar bears into school excites the crowd. Timmy wishes that Mr. Crocus could attend the speech. Suddenly, Timmy believes that Mr. Crocus was kidnapped by Corrina Corrina and the Russians and sets off with Total to rescue him.