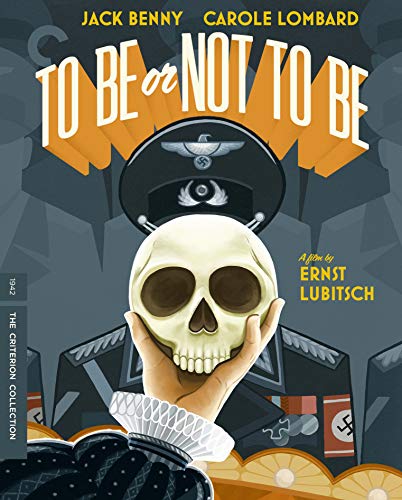 To Be or Not to Be (Criterion Collection) [Blu-ray]

The Criterion Collection has announced that they are adding the war comedy To Be Or Not To Be to their upcoming slate of Blu-ray releases. The film was directed by Ernst Lubitsch and features Carole Lombard, Jack Benny, Robert Stack, Felix Bressart, and Lionel Atwill. To Be Or Not To Be is currently available for pre-order online and will be available in stores everywhere beginning on August 27th.

As nervy as it is hilarious, this screwball masterpiece from Ernst Lubitsch stars Jack Benny and, in her final screen appearance, Carole Lombard as husband-and-wife thespians in Nazi-occupied Warsaw who become caught up in a dangerous spy plot. To Be or Not to Be is a Hollywood film of the boldest black humor, which went into production soon after the U.S. entered World War II. Lubitsch manages to brilliantly balance political satire, romance, slapstick, and urgent wartime suspense in a comic high-wire act that has never been equaled.

To Be Or Not To Be was released in March of 1942 and was nominated for an Academy Award for Best Music.

The Criterion Blu-ray will include several special features, including:

Disclaimer: Affiliate links are contained in this post. This means when you click a link, and purchase an item, Movie House Memories will receive an affiliate commission. Advertisers and Affiliate Partnerships do not influence our content. See our Terms of Use about the inclusion of affiliate links on this site for more information.
July 15, 2013
1 minute read
Show More
Back to top button
Close
Close