The infamous Tom and Jerry are back on the big screen for a new generation. The boys are in New York. Tom Cat is looking to break into the music industry, and Jerry Mouse is looking to find a place to live. A chaotic battle ensues in which Tom’s keyboard is destroyed and Jerry takes refuge in the ritzy Royal Gate Hotel. At the same time, Kayla cons her way into a new job at the hotel, where she is put under the supervision of Terence who is assisting the planning of a wedding of a famous couple. However, everything is thrown out of whack when Tom and Jerry enter the equation. 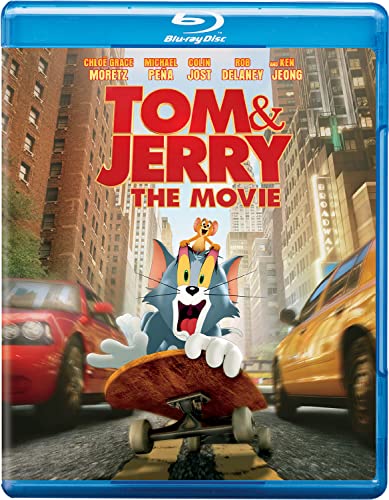 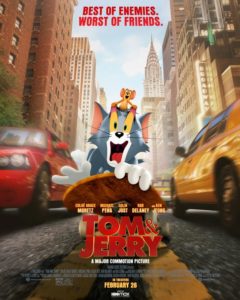 Tom and Jerry are back for a new generation. Tom Cat lives in Manhattan and dreams of becoming a pianist. He plays in Central Park to earn some money. There, he encounters Jerry Mouse, Tom’s longtime rival, who is the big city looking for a new home. Jerry interrupts one of Tom’s performances, and the two of them get into a fight which destroys Tom’s keyboard. Tom’s audience retrieves the money the gave him, leaving Tom penniless. Tom chases after Jerry.

At the same time, Kayla Forester (Chloë Grace Moretz) is walking through the park when she bumps into Tom right before he is hit by a van. Kayla quits her job and finds herself looking for a new job. She stops by the Royal Gate Hotel where she cons her way into a position assisting the event manager Terence Mendoza (Michael Peña) who is working on setting up a high-profile wedding between Preeta Mehta (Pallavi Sharda) and her fiancé Ben (Colin Jost). At the same time, Jerry finds his way into the hotel and sets up residence. He begins stealing food from the kitchen and the hotel’s renowned Chef Jackie (Ken Jeong).

Meanwhile, Preeta and Ben arrive at the hotel with their pets, the dog Spike and the cat Toots. Jerry proceeds to steal from Preeta’s bag. Terence places Kayla in charge of catching Jerry after she volunteers. The hotel’s owner, Henry Dubros (Rob Delaney), is impressed with Kayla’s drive and her willingness to protect the prestigious reputation of the hotel. At the same time, Kayla befriends a bartender named Cameron (Jordan Bolger).

I will not let this hotel be ruined by a cat and a mouse! Chef Jackie

Meanwhile, a depressed Tom falls into despair. He is pulled out of his doldrums when he notices Jerry inside one of the hotel rooms. An enraged Tom goes after him but finds his access to the hotel blocked on several occasions. Eventually, Tom gets inside and fights with Jerry which results in a room being wrecked. Kayla comes to check on the noise complaint from the room and befriends Tom. Kayla convinces Mr. Dubros to hire him to capture and remove Jerry. Terence does not agree with Kayla’s plan.

After several failed attempts to capture Jerry, Tom eventually catches Jerry. Tom ships Jerry away in a box. At the same time, Kayla learns from Preeta that her engagement ring is missing. Kayla offers to help Preeta find the ring without Ben knowing. The two of them become friends. After she learns that Tom has gotten rid of Jerry, Kayla celebrates with Cameron and Tom. Tom plays a song on the bar’s piano to impress Toots. However, Jerry suddenly reappears and reveals that he has Preeta’s ring. Jerry agrees to give it back to Kayla if she will allow him to stay at the hotel.

Before Kayla can agree, Terence enters the bar with Spike, who Preeta asked him to take for a walk. Terence discovers that Jerry is not gone. However, Spike, Tom, and Jerry get into a three-way fight which destroys the hotel lobby. Terrence properly blames Kayla for the destruction, but Mr. Dubros blames Terrence and fires him. Mr. Dubros makes Kayla interim event manager after learning that she returned the stolen ring to Preeta. Kayla agrees to allow Tom and Jerry to stay at the hotel if they can promise to get along and spend the whole next day far away from the hotel. Tom and Jerry agree. The two enemies take a trip together but end up in a pound after they inadvertently disrupt a baseball game. The other cats in the pound attempt to eat Jerry and encourage Tom to do the same, but, surprisingly, Tom protects Jerry.

Meanwhile, Kayla initially struggles to stay on top of the wedding planning. However, she eventually gets the hang of her new responsibilities. Unfortunately, Terence arrives with Tom and Jerry whom he freed from the pound. Terence incites Tom and Jerry to get into a fight which results in the hotel being wrecked. As a result, the wedding is ruined, and Kayla loses her job. Preeta calls off the wedding to Ben. Terence regains his job and kicks Tom out of the hotel.

Both homeless, Tom and Jerry encounter each other living on the street. The two figure out that the wedding being called off was their fault and agree to set aside their differences to make things right. They convince Kayla, the hotel crew, and an extremely reluctant Terence to work together to convince Preeta to reconsider. Tom and Jerry pursue Preeta on an electric skateboard and aerial drone and successfully lure her to Ben. The hotel staff organize an impromptu wedding ceremony in Central Park, across the street from the hotel. Once in the park, Preeta and Ben realize that they genuinely want each other and proceed to get married in front of their families and the hotel staff.

After the wedding, Mr. Dubros offers Kayla a job. She introduces the hotel owner to Linda Perrybottom (Camilla Arfwedson), the woman who Kayla stole the resume from at the beginning of the film. Mr. Dubros offers Linda a job as well.

In a post-credits scene, Ben asks Mr. Dubros why he was being billed for both weddings. Mr. Dubros tells him that it was the decision of his event planner Terrence. Terrence thanks Ben for staying at the Royal Gate Hotel.