Tom Horn is a renowned former army scout who is hired by a cattle association to hunt down cattle rustlers. Tom’s methods are violent and usually end with the rustlers’ deaths. However, the association turns a blind eye to Tom’s methods until it turns politically unpopular for them. The association frames Tom for a crime and the cowboy soon finds himself on trial for the murder of a boy. Tom finds that the simple skills he knows are of no help in dealing with the ambitions of ranchers and corrupt officials as progress marches over him and the Old West. 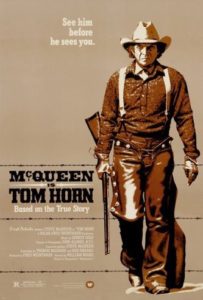 Tom Horn (Steve McQueen) is a legendary frontier scout who helped track and capture the infamous Geronimo. However, the years have not been kind and now Tom drifts around the western frontier looking for work. The film begins with Tom riding into a small town and getting into a fight with prizefighter “Gentleman” Jim Corbett (Steve Oliver). Tom ends up sleeping in the stable with his horse, bruised and nearly unconscious. He is approached by cattle company owner John C. Coble (Richard Farnsworth). Coble offers Tom a job investigating and deterring cattle rushers who steal from the grazing association that Coble belongs to. Coble states that the association will turn a blind eye to a vigilante form of justice. Tom accepts the job offer and heads off to Coble’s ranch.

Once there, Tom encounters U.S. Marshall Joe Belle (Billy Green Bush) at an association luncheon. Belle gives his approval to Tom’s assignment. Tom also meets the local schoolteacher Glendolene Kimmel (Linda Evans) and the two begin a romantic relationship. Tom begins his assignment, calling himself a stock detective. He first confronts a group of cowboys at an auction whose cattle bear Coble’s brand on them. Tom gives them a warning to stop their thievery and to leave the area, or he will hunt them down and kill them. After the cowboys fail to follow his warning, Tom goes on a one-man crusade to kill or otherwise drive off anyone who rustles the cattle of the association members.

Tom’s methods are highly effective and at first, the association is pleased with his results. However, Tom’s violent approach falls under scrutiny after a public gunfight. The general public opinion begins to turn against Tom. The association members realize that Tom is doing just what they hired him to do, but that his tactics will eventually tarnish their images. The formulate a plot to take Tom down without firing him. Additionally, Belle has his own political ambitions and does not want the taint of Tom’s violent methods affecting him.

The association decides to frame Tom for a crime that he did not commit. The association hires someone to kill a young boy tending sheep. They have the assassin use .45-60 caliber bullet to commit the murder, the same caliber rifle that Tom is known to use. Despite rumors that he is being set up, Tom refuses to leave the county or to avoid the town. Both Coble and Glendolene try to warn Tom to be careful, but convinced of his own innocence, Tom ignores their warnings.

One day, Belle convinces Tom to come to his office for a talk. Belle has a reporter hiding behind a door so that he can hear the entire conversation. Tom does not openly admit to committing the murder but does state that if he did shoot the boy, it would have been the best shot that he ever made. Tom is arrested based on that one statement and charged with murder.

Locked in a cell, Tom seems confused about the world around him. Tom is not accustomed to the rules and laws of an ever expanding civilization and is more used to frontier justice. Tom longs for the open spaces of the West and seems uncomfortable in his cell. Eventually, Tom breaks out of jail and attempts to go on the run. However, he is quickly recaptured and brought back for his trial. The trial does not go well for Tom. The testimony of the newspaperman is damning for Tom’s case, and Tom’s testimony does little to convince anyone of his innocence. Tom is convicted and sentenced to hang. As his execution nears, Tom comes to accept his fate, resolving that the West is no longer the place for him. Tom is ultimately hanged for the crime that he did not commit.