Famous lawman Wyatt Earp moves to Tombstone, Arizona after successfully cleaning up Dodge City. Wyatt and his two brothers, Morgan and Virgil, wish to get rich in obscurity in the small upcoming town. Wyatt is joined by his friend, the infamous gunslinger Doc Holliday who is traveling west to deal with his tuberculosis. A band of outlaws that call themselves The Cowboys are causing problems in the region with various acts of random violence, and inevitably come into confrontation with Holliday and the Earps, which leads to a shoot-out at the O.K. Corral. 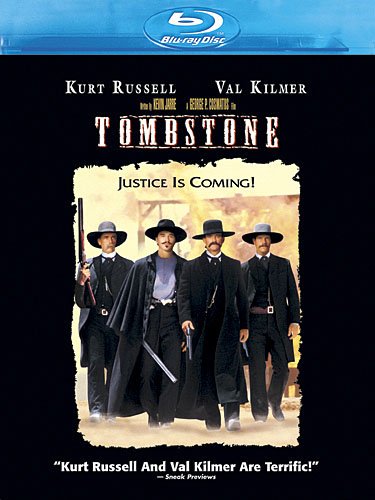 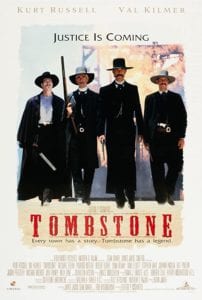 Tombstone and the surrounding area of Cochise County are controlled by the ultra-violent, outlaw gang known as the Cowboys in 1879. The Cowboys are identified by the red sashes that they wear around the waists. The gang is led by “Curly Bill” Brocius (Powers Boothe) and his second in command, Johnny Ringo (Michael Biehn). As the film begins, the Cowboys ride into a Mexican town and interrupt the wedding of a local police officer. The gang proceeds to kill the attending policemen, as well as a priest who curses them for their violence. The educated Ringo tells Curly Bill that the priest was quoting the bible and referencing the infamous fourth horseman of the apocalypse before the gunman killed him.

Meanwhile, Wyatt Earp (Kurt Russell) arrives in Tucson, Arizona where he reunites with his brothers Virgil (Sam Elliott) and Morgan (Bill Paxton) and their wives. The retired police officer has plans to settle down in Tombstone and begin a business with his brothers. At the same time, Wyatt’s friend Doc Holliday (Val Kilmer) makes his way to Tombstone with his traveling companion Big Nose Kate (Joanna Pacula) in hopes that the dry climate will mitigate his tuberculosis.

Once in Tombstone, Wyatt takes over an interest in a Pharaoh game at a local saloon from the abusive Johnny Tyler (Billy Bob Thornton). Wyatt is approached by Mayor John Clum (Terry O’Quinn) who tries to convince Wyatt to become a law enforcement officer, but Wyatt tells him that he wants to remain retired. The Earps make a deal with the local corrupt Cochise County Sheriff Johnny Behan (Jon Tenney) to purchase lots for homes at the edge of town. Actors Josephine Marcus (Dana Delany) and Mr. Fabian (Billy Zane) also arrive in town the same day as Wyatt and his brothers, as does Holiday.

The violence continues to increase in town and Virgil begins to have difficulty turning a blind eye to the Cowboys’ dirty deeds. Additionally, the Cowboys appear to not appreciate the Earps and Holiday in town either and make veiled threats against them. At the same time, a romance begins to blossom between Wyatt and Josephine despite Wyatt living with his common-law wife Mattie Blaylock (Dana Wheeler-Nicholson). Mattie is succumbing to an addiction to laudanum.

One-night, Curly Bill begins shooting up the town after he leaves an opium den. The town law enforcement officer, Marshall Fred White (Harry Carey Jr.), goes out into the street to disarm the intoxicated gunman. Curly Bill shoots White while playing around with his guns. Wyatt knocks Curly Bill out and disarms him, placing him in custody. The arrest angers two Cowboys, Ike and Billy Clanton (Stephen Lang and Thomas Haden Church), who demand that Wyatt release their leader. Holiday and Virgil rush in to back up Wyatt and Curly Bill is placed into jail. However, a few days later, the criminal case against Curly Bill is dismissed due to a lack of witnesses.

Virgil reaches his limit and his conscious compels him to become the new town marshal. Wyatt is furious with his brothers as Morgan becomes Virgil’s deputy. Virgil implements an ordinance that everyone is required to surrender their firearms in the town limits. The Cowboys are not fond of Virgil’s law, and the Clantons get into a confrontation with Virgil after getting drunk one night at the saloon. The Clantons return the next day with some other Cowboys, drunk and armed. Virgil decides to go down and disarm them at the OK Corral. Wyatt, Holiday, and Morgan join him. A gun fight ensues in which Billy Clanton and the McLaury brothers are killed. Virgil and Morgan are both wounded in the exchange. Ike Clanton is the only survivor of the Cowboys in the gunfight.

A short time later, the Cowboys enact revenge on the Earps, killing Morgan and severely wounding Virgil. Virgil survives the attack but loses the use of his arm. Wyatt and his family decide to leave Tombstone. Before leaving, Wyatt tells Curly Bill that it is over, but the gang leader tells Ike to take some men and kill Wyatt and Virgil. At the train station, Wyatt has anticipated the ambush and kills one of the gunmen and disarms Ike. Wyatt is joined by Holiday and three former Cowboys, Sherman McMasters (Michael Rooker), “Turkey Creek” Jack Johnson (Buck Taylor), and John “Texas Jack” Vermillion (Peter Sherayko). Wyatt has taken up the badge of a U.S. Marshall and warns Ike that he is coming to kill all the Cowboys before turning the Cowboy loose.

Wyatt’s posse systematically kills all the Cowboys that they encounter. In one incident, Wyatt’s group finds themselves pinned in by Curly Bill and his gang near a creek. Wyatt walks directly into the line of fire and kills the Cowboys’ leader and several of his men while simultaneously avoiding being shot hit himself. Holiday’s health continues to deteriorate while they are on the hunt for Cowboys. Wyatt is forced to leave Holiday at Henry Hooker’s (Charlton Heston) ranch when he is challenged by Ringo to a one on one gun fight. Before leaving, Holiday tells Wyatt that he can’t beat the Cowboy gunfighter. However, Holiday shows up to the gun fight in Wyatt’s place and kills Ringo. With the leadership eliminated, Wyatt’s group finishes the job of killing the remaining Cowboys.

Sometime after the events in Tombstone, Holiday is sent to a sanatorium in Colorado where he is slowly dying from tuberculosis. Wyatt continually visits his friend despite Holiday’s requests for him not to. Holiday implores Wyatt to forget him and pursue Josephine to begin a new life together. Wyatt leaves his old friend, who dies shortly afterwards. Wyatt reunites with Josephine and they begin a romance together that lasted until his death in 1929.