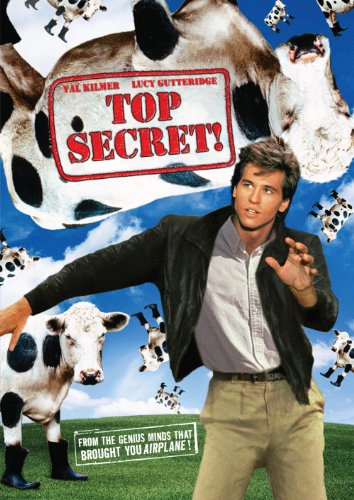 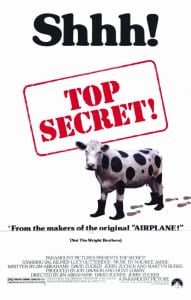 Top Secret! takes place sometime between 1946 and 1985 with the iron curtain upon East Germany. Apparatchiks wield enormous power over the huddled masses. Grim soldiers stalk the towns for evidence of sedition. The French resistance…resists. And kids the world over groove to rock and roll.

Nick Rivers (Val Kilmer) is a rock star at the top of the charts. He’s a ladies’ man who doesn’t play by the rules–as long as chicks are 18. Nick finds himself in East Germany to perform in a music festival. While he eats, the police pursue a mysterious woman named Hillary Flammond (Lucy Gutteridge) whose bosoms defy gravity. Nick defends Hillary from the police, but he kills two cops in the process. So they arrest him, and throw him in the slammer.

There, they let him languish in prison for as many as twenty minutes before they torture him for information about the mysterious Hillary and her resistance. Nick doesn’t crack, but then he doesn’t even know anything to crack about. The Party then okays Nick to perform at the music festival, but he escapes with Hillary to join the resistance in East Germany. There he meets many resistance members including Déjà vu (Jim Carter), Chocolate Mousse (Eddie Tagoe), and their mysterious leader only known as The Torch (Christopher Villiers).

The resistance to the rescue

The resistance desperately wants to rescue Hillary’s father, Dr. Paul Flammond (Michael Gough). When Nick met the Doctor Flammond in prison, he learned the Germans already forced the good doctor to create a terrible weapon which will shift the balance of power in Europe. It enables the Evil General Streck (Jeremy Kemp) to consolidate power among the stuffy, monocled, old dudes at his club.

Nick falls in love with Hillary as they fight the power, but there is trouble once she meets the Torch. She discovers the Torch is really a man named Nigel–whom she fell in love with when they were stranded as kids on the same deserted island. They banged many, many times. Since Hillary is still in love with Nigel (and his giant wanker), she quickly casts Nick to the side. However, Nick takes it in stride. He knows he’s not the first guy who fell in love with a woman–whom he met at a restaurant that turned out to be the daughter of a kidnapped scientist–only to lose her to her childhood lover whom she last saw on a deserted island–who then turned out fifteen years later to be the leader of the French underground.

As the sexual tension between Nick, Hillary, and Nigel grows, the resistance looks to rescue Hillary’s father from prison. However, they have a problem. Somehow, there’s a traitor among them who’s leaking their secrets to the police. With that information, the police are closing in on the resistance, and they are running out of time to sneak into the prison that holds Dr. Flammond.

About four classic cow jokes later, they flee with the doctor, and Nigel emerges as the traitor. It seems the Commies rescued him from the island, and taught him the great works of the peoples’ thinkers…and man love. Yep! They taught him man love too. Nigel kidnaps Hillary and flees. However, Nick pursues them, and rescues Hillary once he defeats Nigel in a fistfight at an underwater saloon.

The resistance wins as Nick returns to America. Hillary stays with him so that Chocolate Mousse and his gang can continue to fight the man.